Tonight’s game was delayed by 23 minutes before the first inning started. Then, during the SECOND batter of the game, the game was delayed again, this time for 1 hour and 46 minutes. It’s been a long season for a lot of reasons, but the ridiculous amount of rain delays have been brutal.

Once the game started, it only got worse. Mat Latos allowed four earned runs in the first inning, and the Reds offense was shutout through six innings by Bud Norris. Jay Bruce hit a grand slam in the 8th inning, but it would leave the Reds a run short, 5-4. The Reds had the winning run on third base with 1 out in the 9th inning, and Todd Frazier up. Frazier grounded into a double play to end the game.

The Reds could have picked up a game in the wild-card race with the Brewers losing tonight, and been 6.0 back. Instead, the Reds remain 7.0 back from a wild card spot, and are now 9.0 back from the Cardinals in the NL Central. Tonight was the Reds MLB worst 34th 1-run loss.

According to FangraphsÃ‚Â WPA statisticÃ‚Â (winning percentage added), the most important play of the game wasÃ‚Â Todd Frazier grounding into a game ending double play (Reds strand the tying run on 3rd base).Ã‚Â The play decreased the Reds chances of winning by 37.6% (from 37.4% to 0.0%).

Jay BruceÃ‚Â hit a ball really hard in the second inning off the wall. I thought at the time it was good to see Bruce hit the ball hard. Well, in the 8th inning he hit a ball even harder, and the result was four runs with one swing. Ã‚Â Boy, I think everyone would love to see Jay Bruce finish 2014 strong. He might just be able to do that.

Ryan Dennick pitched a perfect sixth inning in his major league debut, striking out one. DennickÃ‚Â had a nice season with the Louisville Bats, posting a 2.36 ERA and 1.21 WHIP in 57 appearances (all as a reliever). Dennick came up through the Royals organization. The Reds selected Dennick from the Royals in the Rule 5 draft back in 2012. Dennick has yet to make an MLB appearance.

Billy HamiltonÃ‚Â stole his 55th base of the season. That set a new Reds rookie single season record for SB, breaking the previous record of 54 by Bob Bescher in 1909. The only other Reds rookie with 40+ SB was Chris Sabo back in 1988. Here are some other SB records that Hamilton is chasing: 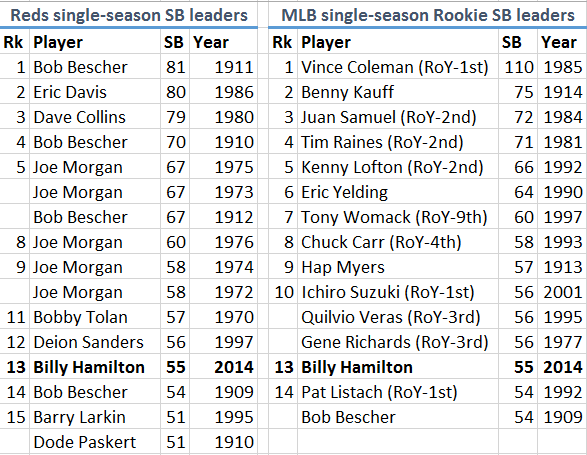 Mat LatosÃ‚Â was pretty bad tonight. I am sure the lengthy rain delay didn’t help him all that much, but allowing 4 ER in the first inning with this offense isn’t going to lead to many wins. Four of the first five batters Latos faced all reached base with singles (all were pretty lightly hit). Eric said it best below, when you don’t strike batters out, this sort of thing happens. Latos entered today with a below average 6.60 K/9 (MLB average this season is 7.71). We have seen a decline in Latos velocity this season, which is certainly a major contributor to his decline in strikeouts. This isn’t to say that Latos hasn’t been good or he can’t be good in the future. He will just be more of a pitcher like Mike Leake (6.81 K/9), and less of a pitcher like Johnny Cueto (8.91 K/9) if he keep this strikeout rate up.

When you don't strike people out things like this happen. #reds

Billy HamiltonÃ‚Â was caught stealing for the 21st time this season (which was six times more than anyone else in the MLB entering today). HeÃ‚Â is now 55 for 76 in SB attempts (72.4%). The MLB average for SB attempts this season is 73.1%.

Billy HamiltonÃ‚Â also probably made the best tackle we will see by a Cincinnati professional athlete this year…..