Former Red, Edinson Volquez took a no-hitter into the 7th inning, before Devin Mesoraco broke it up with a leadoff single. The Reds would eventually take a 1-0 lead in the 8th inning, courtesy of another hit by Mesoraco. Jonathan Broxton couldn’t hold the lead in 8th inning though, as he allowed two earned runs and took the loss. 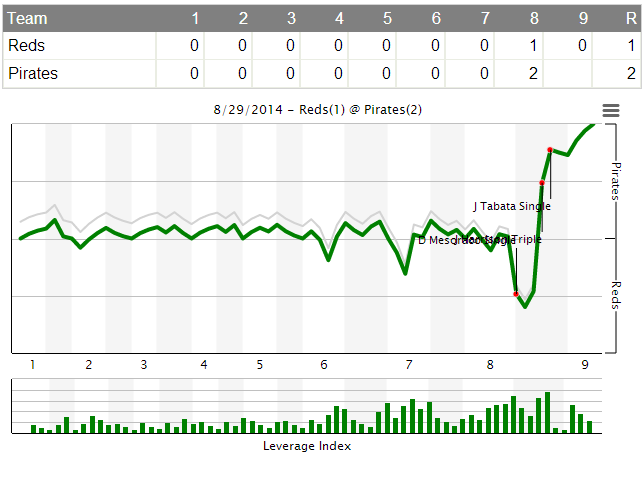 According to FangraphsÃ‚Â WPA statisticÃ‚Â (winning percentage added), the most important play of the game wasÃ‚Â Josh Harrison’s RBI triple in the 8th inning off Jonathan Broxton, tying the game at 1.Ã‚Â Harrison’s triple increased the Pirates chances of winning by 47.4% (from 26.9% to 74.3%).

Josh HarrisonÃ‚Â made three incredible plays at third base tonight for the Pirates. Two of them were run saving plays in the 6th and 7th inning. Harrison also had a pretty great day at the plate too. Harrison of course is the graduate of the University of Cincinnati (aka the second best school in the city in college basketball), and Princeton High School. It always seems like the local kids always kill the Reds.

Devin MesoracoÃ‚Â went 2 for 3, and drove in a run for the Redlegs. He also broke up Volquez no-hitter in the 7th inning.

Mike Leake was absolutely brilliant again. Leake gave the Reds seven scoreless innings, and they needed it as they were getting no-hit by Volquez. Leake may have only struck out 1 batter, but he didn’t walk a single batter. Last two starts for Mike Leake: 13.2 IP, 8 H, 0 R, 3 BB, 7 K. Our own Mike MaffieÃ‚Â wrote a great piece about Leake in his weekly column Sixty Feet From Home earlier today.

I can’t even begin to describe how impressed that I have been in Billy Hamilton’s defense. His ability to track down balls and cover an absolutely ridiculous amount of ground is incredible. Billy Hamilton entered today with 9 Defensive Runs Saved (tied for 8th most among MLB CF), and a 20.8 UZR/150 (3rd best in the MLB among CF). Those two defensive metrics are the best at evaluating a player. For comparison, Shin-Soo Choo had -17 DRS and -17.0 UZR/150 in CF last season for the Reds. It’s crazy to think that Billy the kid just started playing CF for the first time in the minors last season. He will only get better.

Former Red,Ã‚Â Edinson VolquezÃ‚Â gave the Reds yet another no-hit scare. It was at least the third time (from my memory) that the Reds had been no-hit going into the 7th inning this season (see Hyun-jin Ryu, Mike Minor game recaps). Volquez looked like vintage Volquez from back in 2009, when he represented the Reds in the mid-summer classic. The Reds offense was absolutely terrible again, and for the second time this week they had less than 4 hits (had 3 hits on Tuesday vs the Cubs).

We have already seen FIP catch up to Alfredo Simon in the second half, but nowÃ‚Â Jonathan BroxtonÃ‚Â is next. Broxton posed a ridiculous 1.09 ERA in the first half of the season, but had a 3.13 FIP, 4.22 xFIP, and .163 BABIP. Broxton has come back down to Earth a bit of late, as he has had back-to-back appearances allowing runs. Broxton now has a 3.58 ERA in the second half. This is not to say that Broxton isn’t having a very good season for the Reds (because he is), but Broxton shouldn’t have been expected to keep up those first half numbers.

Aroldis ChapmanÃ‚Â was once again saved for a save situation that never happened. Price said he would handle Chapman differently, and give him chances to go multiple innings. He flat out lied about that.

I’m still not exactly sure what happened, butÃ‚Â Brandon PhillipsÃ‚Â was thrown out by a mile at home plate to end the 8th inning. It’s hard to imagineÃ‚Â Reds third-base coach Steve SmithÃ‚Â didn’t have anything to do with the situation.

Not so randoms thoughts……….

“It’s a lot easier to pitchÃ‚Â toÃ‚Â the Reds without Joey Votto.” That is what the Pirates color commentator Steve Blass said in the first inning of tonight’s game. The Pirates broadcasters are without question some of the worst in all of baseball, yet even they can understand how important and valuable Joey Votto is. If only our own lead radio play-by-play broadcaster could understand this or our local newspaper lead sportswriter could understand this.