The Reds won their first series since August 6-7, when they swept the Indians in a short two game series. The Reds got five shutout innings, from the recently recalled from the minors, Dylan Axelrod. The Reds offense exploded for 7 runs and 11 hits, including 6 earned runs off the Cubs best starter, Jake Arrieta. 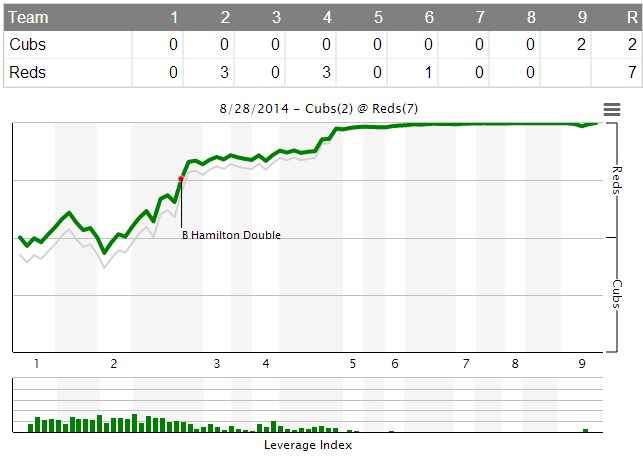 According to FangraphsÃ‚Â WPA statisticÃ‚Â (winning percentage added), the most important play of the game wasÃ‚Â Billy Hamilton’s RBI double in the 2nd inning, giving the Reds a 2-0 lead. The double by Hamilton increased the Reds chances of winning by 10.2% (from 65.5% to 75.7%).

I know thatÃ‚Â throwing 100 pitches and only lasting five innings is nothing to write a book about, but how about Dylan Axelrod? He has given the Reds two very solid starts. I am sure Axelrod will not be able to keep a 1.64 ERA going on very long in the big leagues, but the guy did post a 2.98 ERA and 0.90 WHIP in six starts with the AAA-Louisville Bats. The Reds certainly have to be thrilled with what Axelrod have given them through two starts.

TheÃ‚Â Reds baserunning was crazy good today. The stole six (!) bases off the Cubs (all off Arrieta).

Billy HamiltonÃ‚Â had a great day. Billy the kid went 2 for 2 with 2 RBI, but most importantly he walked twice today. That is the first time this season Hamilton walked twice in game (second time of his career, he did it 9/18/13 vs Houston in a game where he had 6 PA). That is something Billy needs to do much more of in the leadoff spot.

Logan OndrusekÃ‚Â also pitched a perfect inning in relief, striking out one.

Why is Skip SchumakerÃ‚Â continuously put in the Reds starting lineup? Schumaker now has a .599 OPS on the season, and entered today worth a full loss using Fangraph’s WAR. There is no logical explanation for playing him in LF over Heisey or Ludwick. None.

Jay Bruce’sÃ‚Â nightmare 2014 season continued. Bruce was 0 for 5 with 5 strikeouts today. Bruce is hitting .218/.294/.373. I still absolutely believe in Jay Bruce going forward, but let’s hope that I’m right about this year being an injury filled fluke. Here is the list of Reds players with 5+ strikeouts in a game since 1914 (the last year data is available). Hey, at least there are a lot of really good players on that list, right? 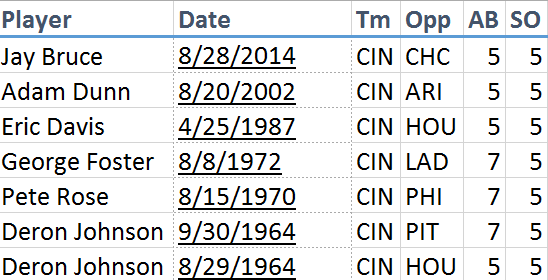 Jumbo DiazÃ‚Â picked a good day to have an off day. Diaz allowed 3 hits and 2 ER in the 9th inning.

I know that it isn’t good for any Reds fans health or sanity to keep any sort of hope alive, but if the Giants lose (they just started their game today with the Rockies), the Reds will only be 5.5 games out of a wild card spot. I wanna believe. I guess crazier things have happened, right?