Anyone who follows the Cincinnati Reds has a pretty good sense that 2014 has been a bit of a roller coaster for Bryan Price’s team. TheÃ‚Â BeastÃ‚Â at King’s Island comes to mind. “Do not stand up” would have been solid advice for Reds fans on March 31. And keep your hands inside the car.

Anyhow, Beyond the Box Score recently published aÃ‚Â fascinating postÃ‚Â by Chris Teeter that showed graphically the ebb and flow of the season for all 30 major league teams. It tracked the six division races, showing how starkly each team’s odds of making a post-season series have fluctuated.

I’d already been thinking about this post and figured Chris’ work would make a great exclamation point. I asked if he would send me a version of the NL Central graph that included just the Reds. He quickly and graciously obliged (thanks again, Chris) with the chart below. The horizontal axis represents dates throughout the season, with the All-Star break and trade deadline highlighted with dashes. The vertical axis represents the odds of playing in a post-season series on a 0-to-50% scale: 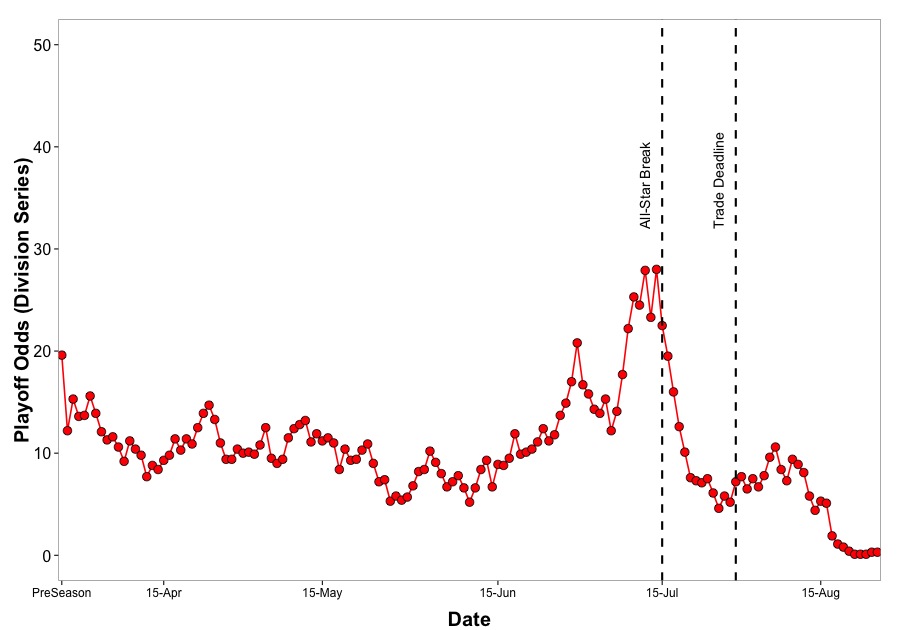 There you have it, in two painful dimensions.

As I studied the jagged line, it drove home with heartbreaking clarity just how acute the Reds collapse has been. Steep and sudden. Matterhorn steep. Mayan Civilization sudden. Describing the last four weeks of the Reds season as a collapse is no insult to the word ‘collapse.’ It has been collapse in every meaning.

The tantalizing gains in the month leading up to the All-Star break were equal parts genuine and counterfeit, glorious and concerning. Both ultimately frustrating. And so I thought I’d write a post about the subsequent four weeks that dashed the team’s chances and our hopes.

This isn’t a post that analyzes the entire season. It doesn’t diagnose the roster weaknesses, highlight the performance failures or ascribe blame. There’s plenty of opportunity for that sad, but necessary task later. Laying out the narrative of the Reds collapse here is simply pushing back against the notion that history is written by the victors.

From June 11 to June 29, the Reds went 14-4. That period coincided with the (initial) anxiously-awaited return of Joey Votto from the disabled list. It also marked the first time he, Jay Bruce and Devin Mesoraco had been on the field together since April 28 (and even then, Bruce was playing on a bum knee that would require mid-season surgery). While Votto couldn’t manage much power during this stretch, he still hit .262/.372/.369. And his presence seemed to propel Bruce to his best two weeks of the season (.324/.364/.577).

The Reds beat Ryu and Greinke and won consecutive series against first-place Milwaukee, Pittsburgh, first-place Toronto, Chicago and first-place San Francisco. If you’re a member of the “if only they were healthy” camp, this is what you point to. Even though Votto was far from right, these two-plus weeks represented the closest thing to fully-operational the Reds reached all season. And they rolled.

When Homer Bailey shut out the Giants on June 29, the Reds were 43-38. Milwaukee hadn’t slowed down yet, so the Reds were still 6.5 games out of first. But they had overcome enough injuries to fill a hospital-wing, were in second place and headed forward. Their success in those 18 games had been real. Real and spectacular.

Following theirÃ‚Â 3-0 series win against theÃ‚Â Giants, the Reds cruised into San Diego only to see their momentum stymied. Not only did getting swept by the Padres and losing 4 of 5 give back much of the hard-earned gains of the previous two weeks, but Joey Votto’s health was clearly fading. And with it, so were the Reds. Votto played his final game on July 5 going 0-for-4 with three strikeouts. The Reds lost 1-0 as Matt Garza out-dueled Bailey.

A little more than a week remained before the All-Star break.

The next eight days proved to be the most tumultuous and quirky of the season for the Reds. Votto surrendered. When you can’t swing without your back leg collapsing, the DL beckons. Brandon Phillips dove to field a ground ball and tore a ligament in his left thumb requiring surgery.

But somehow, the resilient Reds rallied. They went 7-2 heading into the break.

And they won in improbable ways. A 3-run homer by Kristopher Negron on his first hit of the year. Four consecutive hits by Ryan Ludwick, Chris Heisey, Ramon Santiago and Brayan PeÃƒÂ±a? Come on. In five days, the Reds overcame 4-run leads three times, something they hadn’t done all year or since.Ã‚Â It was the week that Ramon Santiago wasn’t awful. From July 8 to 13, he hit .474/.545/.632 for an OPS of 1.177. Prior to that his OPS had been .465 and for the month after it was .555. But for that anomalous week, Santiago was JoeyMVP.Ã‚Â The Reds swept the Cubs in a double header and won a wild series over the Pirates. Without Votto and Phillips.

At the All-Star break, the team’s record stood at 51-44, a mere 1.5 games behind the back-peddling Brewers. Bunched tightly with three other teams in the division, the Reds chances of making a post-season series had crested to 28 percent.

You know how Wile E. Coyote ran off the edge of a cliff but for a second stayed suspended in mid-air? He wouldn’t start falling into the canyon until he looked down. Well, that happened to the Cincinnati Reds. The All-Star break gave the Reds a chance to take a peek at their situation and comprehend the grim reality of playing at least another month without Votto and Phillips.

The Reds offense cratered like the coyote hitting the bottom of the ravine.Ã‚Â They opened the second half on the road, with stops at Yankee Stadium and Miller Park. Manager Bryan Price gamely mixed and matched names like Schumaker, Pena, Ludwick, Santiago and Heisey, two or three at a time. But those players returned to their below-average form because that’s what form is.

In the blink of the general manager’s eye the Reds had lost 7 games and had fallen back to .500. Their odds of making a post-season series had shrunk in a week to 7.6 percent.

Defying the gravity of the condition of their roster, the club managed to play .500 ball for two weeks after that calamitous free fall. That was without Votto and Phillips, without much contribution from Bruce or Frazier, and without a single hit from Jack Hannahan.Ã‚Â Playing even-steven under those circumstances was an actual accomplishment. If the Reds had simply managed to do that since the All-Star break, they’d be one game out of the Wild Card race today.

When Homer Bailey, Manny Parra and Jonathan Broxton shut out Cleveland on August 7, the Reds amazingly were three games over .500 and four games out of first place. It was a final gasp in the same way a drowning person struggles back to the surface one last time before meeting their fate.

Inconsistent offense continued to plague the Reds, but a leaky water main and a leakier bullpen conspired to drive the fatal stake into the heart of their 2014 season.

The team had been losing ground to Milwaukee for ten days, but because of the weakness of the National League, the Reds were still, miraculously, within easy striking distance of the second Wild Card. Thanks to the aforementioned plumbing malfunction, the Reds and Colorado Rockies were forced to cancel their game on August 16. The next day, in the ninth inning of the first game of the double-header, Aroldis Chapman took the mound with the Reds holding a 9-5 lead. Odds of winning: 97.8 percent (not even factoring in the matchless qualities of the Reds closer).

You know what happened next.

But if Chapman had told the coaches that his shoulder was balky and they’d used a pitcher who wouldn’t walk the first four batters or if Drew Stubbs had swung and missed, like a gazillion times before, maybe the Reds don’t blow that lead. If they aren’t forced to play a double-header at all, maybe the bullpen rallies, instead of implodes, in the next game. Maybe the Reds win, instead of lose, the following four games that the now-careening bullpen blows. Without the postponement, Dylan Axelrod pitches the first game of the Braves series instead of David Holmberg. Stupid water main.

Then again, the water main break was just one day. The bullpen failure lasted nearly a week. In the seven games starting on August 17, Reds pitchers gave up 48 runs (team ERA 6.71), the bullpen was responsible for more than half of those runs, giving up at least two every game. Brandon Phillips’ return on August 18 didn’t create a ripple in the undertow that had grabbed the Reds and was dragging them to their fate.

From August 8 through August 22, the Cincinnati Reds were miserable, going 2-12. Their odds of playing in a post-season series stood at 0.1 percent.