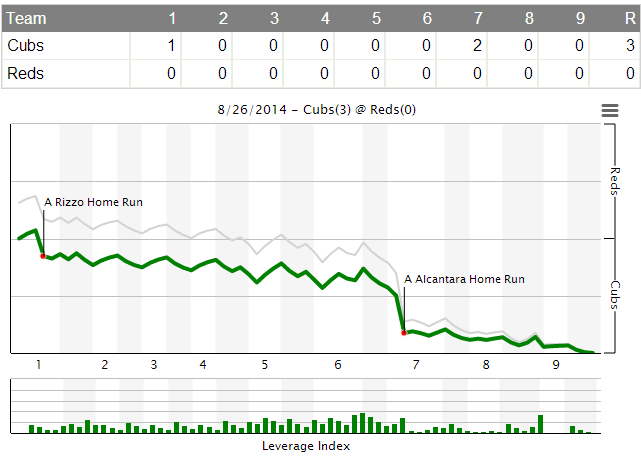 According to FangraphsÃ‚Â WPA statisticÃ‚Â (winning percentage added), the most important play of the game wasÃ‚Â Arismendy Alcantara’s 2-run HR in the 7th inning, giving the Cubs a 3-0 lead.Ã‚Â That play decreased the Reds chances of winning by 16.3% (from 25.0% to 8.7%).

The former Red absolutely dominated the Reds for six innings tonight. It’s not like Wood is having a stellar season either. He entered play today with a 4.91 ERA, 4.21 FIP, and 1.52 WHIP.

Johnny CuetoÃ‚Â dominated until the 7th inning, when he gave up a 2-run HR toÃ‚Â Arismendy Alcantara. All in all, it was a pretty solid start from Cueto. However, with the current state of the Reds offense, you won’t win many games allowing 3 runs.

Zack CozartÃ‚Â makes playing SS look so easy. Every single night he is making a spectacular play, taking hits and runs away from the Reds opponents. I just love watching Cozart field his position.

Daniel CorcinoÃ‚Â made a very impressive debut for the Reds (and on his 24th birthday too!). He pitched a perfect 9th inning for the Reds, striking out 2 of the 3 batters he faced. Our own Doug GrayÃ‚Â wrote about Corcino on his site earlier this year.

Sam LeCureÃ‚Â entered the game in the 7th inning with 2 runners on base and 1 out. LeCure struck out Baez, and got Rizzo to ground out to end the inning. It has been a tough year at times for LeCure (3.69 ERA, 4.04 FIP, 1.53 WHIP), but it was nice to see him get the job done tonight.

The Reds faithful (all 37 of them) gotÃ‚Â FREE PIZZA this evening, as the Reds pitchers were able to strike out 13 batters.

TheÃ‚Â Reds offenseÃ‚Â was absolutely terrible, yet again. The Reds were shutout for the 12th time this season. It is just ugly to watch to these guys at the plate.

The Reds very strangely elected to start tonight’s game on time. The rain started pouring as Cueto faced the second batter of the game. The third batter of the game, Anthony Rizzo hit a HR off Cueto (who appeared to have issues gripping the baseball). After the next batter (Castro) got a hit, the game was delayed for 50 minutes. Why on earth would the Reds decide to start this game on time, especially with their ace on the mound? For those who might not be aware, the home team has 100% control on if a game is delayed or not because of rain. Once the game starts, the umpires take over control of delaying the game or not. Maybe the Reds were given poor weather reports, but this certainly looked like a horrible error on the Reds part.

According to Jim Day during the Reds broadcast, Cueto and his teammates were not very happy. Here is what Jim Day said during the top of the 3rd inning:

“I gotta tell you what. There are none too many happy Reds players down here in the dugout right now, and one of them is Johnny Cueto. They are not too happy that they started this game. I know weather is hard to predict, but I’ve never seen Cueto as angry as he was after they called him off the field.”