The Cubs are of course in the middle of a massive rebuilding project, as they have traded Jeff Samardzija, Jason Hammel, Emilio Bonifacio, Darwin Barney, and James Russell in the last two months. All signs point towards a bright future for the Cubs, as they currently have three of the top six prospects in the MLB (according to MLB.com): #3 Kris Bryant (3B), #5 Javier Baez (SS/2B), and #6 Addison Russell (SS). At a time in baseball when top controllable position players are at a premium, the Cubs are stockpiling them.

The Cubs are coming off an impressive three game sweep at Wrigley Field over the weekend against the first place Baltimore Orioles. The Cubs come in winners in 6 of their previous 8 games.

The Reds and the Cubs are pretty even offensively. The Reds have scored just two more than the Cubs over the course of the season. The Cubs have shown much better power than the Reds, although the Reds have been much better on the basepaths.

The lineup that the Cubs are bringing out everyday right now is pretty solid. Manager Rick Renteria has pretty much put out the same lineup everyday, with the exception of RF. He plays Sweeney, Ruggiano, and Szczur in RF. When the Cubs have Ruggiano in the lineup (who has recently been dealing with ankle soreness), the Cubs lineup features six above average hitters (using wRC+), plus the young stud Javier Baez, and a solid catcher in Wellington Castillo.

Starlin Castro is currently on the bereavement list, but he isÃ‚Â expected to return to the Cubs lineup on Tuesday.

One of the Cubs top prospects Javier Baez (#5 overall prospect in the MLB according to MLB.com) was called up earlier this month, and he hasn’t disappointed in the power department. Baez has already hit 7 HR in just 20 games. He has however struck out 36 times in 86 PA (41.9 K%), while only walking 4 times. Baez certainly has a lot of room to improve, but the Reds pitchers better not miss down the middle of the plate to him, or we will see some bleacher shots. 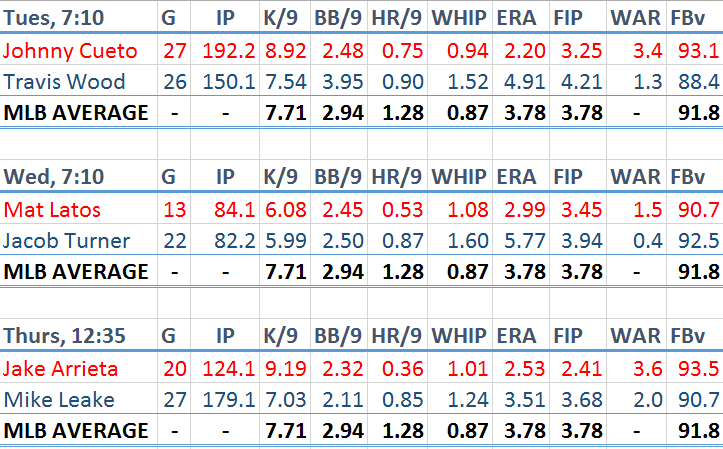 Monday and Tuesday’s pitching matchups give the Reds a significant advantage. Cueto is having a tremendous season, and Latos has pitched very well since returning from the DL in early June.

Who would have imagined theÃ‚Â Cubs bullpen would beÃ‚Â betterÃ‚Â than the Reds bullpen before the season? Hector Rondon has done a really good job as the Cubs closer, and Wright, Strop, and Ramirez have also all been nice weapons. Cubs relievers have done a much better job this season at not hurting themselves, by being walking fewer batters and keeping the ball in the park better than the Reds.

The Reds are without question one of the best defensive clubs in baseball. The Cubs are around an average defensive club, despite their great fielding percentage. The Cubs official scorer has been known to be very generous to the home town team when it comes to errors.

Arismendy Alcantara has been exceptionally good defensively in the 41 games he has played in since being called up. Alcantara already has 9 DRS in 41 games (5 at 2B, 4 in CF). Alcantara is exclusively playing CF now that Baez has been called up, and he is certainly holding that down defensively. The corner outfield spots however have not been very good for the Cubs. Ruggiano has -11 DRS, Coghlan has -10 DRS, and Sweeney has -1 DRS.

As for the infield, Starlin Castro still struggles at times defensively (-6 DRS), but Javier Baez (3 DRS) and Anthony Rizzo (3 DRS) have been pretty good. Valbuena also is a shaky defender at 3B, as he has -9 DRS this season.

The Reds find themselves out of the NL Central race. They do still have an outside shot at a wild card spot. It almost goes without saying that the Reds would need to sweep the Cubs if they want Ã‚Â any realistic shot at the postseason. It doesn’t get any easier after this either. The Reds next five series are at Pittsburgh, at Baltimore, vs the Mets, vs St. Louis, and at Milwaukee.