The Dayton Dragons introduced their new ownership group this afternoon at an event held at Fifth Third Field.

Every game in the Dragons 15-year history has been a sell-out at Fifth Third Field, stretching back over 1,000 games. Their streak represents an American record for the most consecutive sell-outs for a professional sports organization. The previous record was 814 games set by the Portland Trail Blazers of the NBA from 1977-’95. 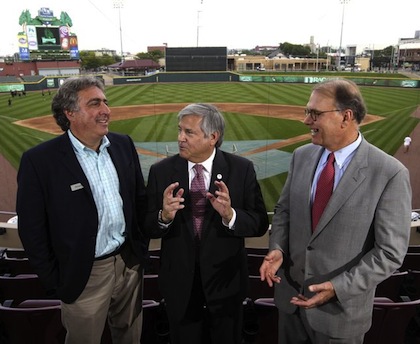 Given that record of success, it wasn’t surprising that the main theme at today’s event was continuity. As Tom Nichols, the Dragons Director of Media Relations and Broadcasting, introduced the new owners, he emphasized the “core principles” that have been crucial for the organization’s “ability to sustain success.”

Nick Sakellariadis said the new ownership group had looked at over 20 franchises before they decided to purchase the Dragons. He said the main qualities that stood out about the Dragons operation was their “fantastic customer care, their appeal to family entertainment and their dedication to execution.” Sakellariadis stressed that it was important to the ownership group that the senior management stayed on board, particularly Robert Murphy, President, and Eric Deutsch, Executive Vice President.

Greg Rosenbaum, who is a native Ohioan (Toledo) and traveled to Cincinnati and Dayton frequently when he was young, spoke of the “unmatched community support” for the team.

I asked Bob Murphy how an organization that was already so successful could take their operation to the next level under new ownership.

“Our basic philosophy is continuity,” Murphy explained “We also invest heavily in our people. We work hard to train them and then make sure we keep them. Because we have such great people working here, we’re never satisfied, never complacent.

“Every year we go through a process of tearing down what we do, we critique it, we ask what can we do better and improve. We do this every year.”

I asked him what role the new ownership can play in that process. He said they “can help keep the stadium fresh, with new technology and hospitality areas. We want our fans coming back year after year.”

The new ownership hasn’t had their first board meeting yet, that’s tomorrow. But I asked Greg Rosenbaum how they felt about the challenge of buying an organization that already sold-out all its games.

“The organization is already a great success. You can’t beat the management team that Bob, Eric and the rest have established,” said Rosenbaum. “The role of the ownership group is to look at the big picture. Nick was an investment banker for 35 years. My primary business is buying companies and looking for new ways, maybe outside the box, to improve their operations. Then we have Mike, who has owned sports teams for seventeen years, to serve as a check on our ideas. We’ll look for ways to go beyond local, to broaden the impact beyond the city of Dayton.

“One of the things we loved about the Dragons was their parent team. The Reds are an organization committed to building their team through their farm system. That dates back to the days of the Big Red Machine. We know the Dragons will continue to have great players come through here. We also know with our proximity to Cincinnati, we’ll have our share of big leaguers rehabbing here like Brandon Phillips recently.”

Ã¢â‚¬Å“We are thrilled with the completion of the purchase process,Ã¢â‚¬Â said Sakellariadis.Ã‚Â  Ã¢â‚¬Å“The Dayton Dragons have proven to be one of the top performing and well-operated teams in all of baseball.Ã‚Â  We have been to Dayton many times, attended Dragons games, and toured the community.Ã‚Â  We really fell in love with the stadium, the experience, the fans, and the entire community.Ã¢â‚¬Â