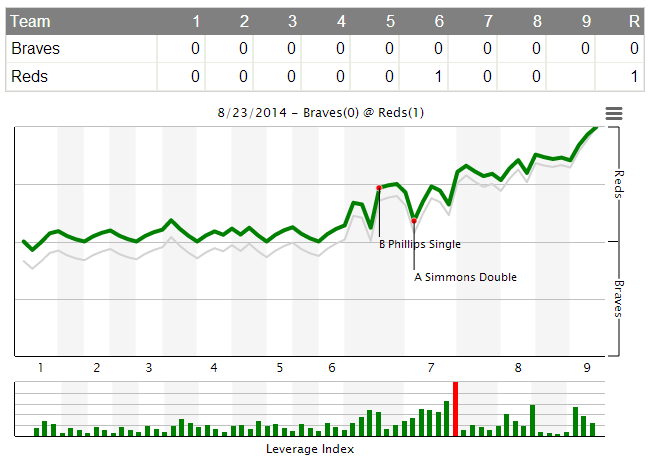 The Reds ended their seven game losing streak with a 1-0 win on Saturday night. The Reds actually won a 1-run game, and are now 19-31 in 1-run games this season. The Reds are now 7.0 back from a wild card spot, and 9.5 games back in the NL Central.

According to FangraphsÃ‚Â WPA statisticÃ‚Â (winning percentage added), the most important play of the game wasÃ‚Â Brandon Phillips RBI single in the 6th inning, giving the Reds a 1-0 lead.Ã‚Â Phillips hit increased the Reds chances of winning by 17.4% (from 56.0% to 73.4%).

Leake gave the Reds a tremendous start, giving the Reds 6.2 scoreless innings. It was certainly necessary as the Reds could only put 1 run on the board. It must be difficult to pitch to with such little run support, and with such small wiggle room to work with. Leake now has a 3.51 ERA, 3.67 FIP, and 1.24 WHIP on the season.

Brandon Phillips had a big RBI single to give the Reds a 1-0 lead in the 6th inning. Phillips bailed out Price and Schumaker (who are mentioned below). Phillips had 2 hits tonight, and reached base a third after being hit by a pitch.

The Reds bullpenÃ‚Â didn’t allow a run in 2.1 innings tonight! The Reds bullpen has really struggled this season, but tonight Diaz, Broxton, and Chapman got the job done.

Zack Cozart made a terrific play on a rocket hit at him in the 7th inning. The Braves had the bases loaded and two outs, and the play got the Reds out of a big jam. Cozart should absolutely win the gold glove this season. He entered play today with 20 DRS (Defensive Runs Saved), which is the third most of ANY player at ANY position in the MLB, and the most of any SS.

Bryan PriceÃ‚Â made another poor tactical baseball decision tonight. After a leadoff double in the 6th inning of a 0-0 game, Price had Billy Hamilton lay down a sacrifice bunt to move Leake over to third base. That brought up Skip Schumaker and his .602 OPS entering today (which in no way should be batting second anyways), and of course he struck out on three pitches. The bunt decreased the Reds chances of winning the game by 0.7% (and that is not factoring in that Skip Schumaker is a below average hitter).

The Reds offenseÃ‚Â just continues to struggle. The Reds had just 5 hits and 1 walk, while striking out 7 times. It certainly doesn’t help having Skip Schumaker and his now .592 OPS hitting second. Mitchel LichtmanÃ‚Â wrote an excellent piece about about lineup optimizationÃ‚Â yesterday, where he criticize the Reds for their use of the #2 spot in the lineup.

Billy Hamilton went 0 for 3 tonight, and his OBP has now dropped to .299. Hamilton has had a very nice season (especially defensively) for the Reds, but a .299 OBP from the leadoff spot just won’t cut it.

Harold Reynolds (who was one of the color analysts along with Tom Verducci tonight for FS1) was actually the voice of reason tonight about Joey Votto. Reynolds said there is a difference between playing hurt (like Brandon Phillips is doing) and being injured (like Votto is). He basically also said that those questioning Votto’s toughness are wrong. As a SABR guy, I’m not usually a fan of Reynolds, but I thought what he said about a player whose hitting approach he has often criticized was well spoken. And for that, I’ll give Reynolds a pass for all the bunt, grit, leadership, pace of game, and SWAG talk tonight.

I also really likeÃ‚Â Tom Verducci. I don’t always agree with everything Verducci says, but he always does great extensive research for the games he covers. I certainly appreciate that as a viewer.

Walt JockettyÃ‚Â is reportedlyÃ‚Â “likely to return” next season. The good news for Reds fans is that Walt does at least own an iPad (or some sort of tablet), so you can throw away those “Walt is behind the times” comments! 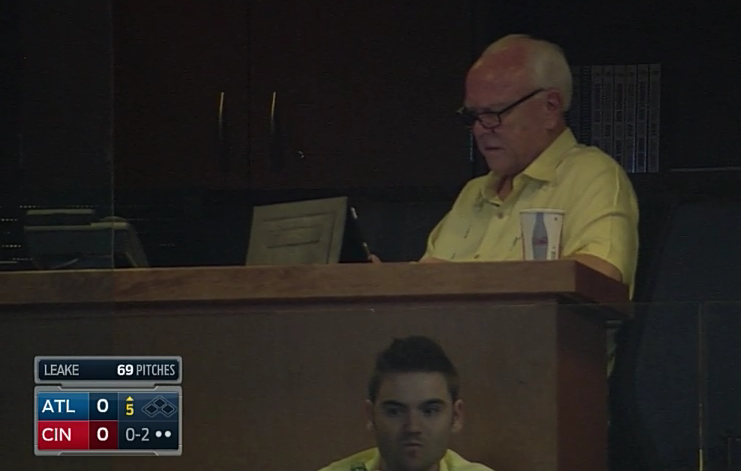 The Reds will go for a series split with the Braves tomorrow afternoon . The Reds will face our good friend Aaron Harrang (26 GS, 3.50 ERA, 3.65 FIP, 1.40 WHIP), who is having a very nice comeback season for the Braves. The Reds will counter with Alfredo Simon.