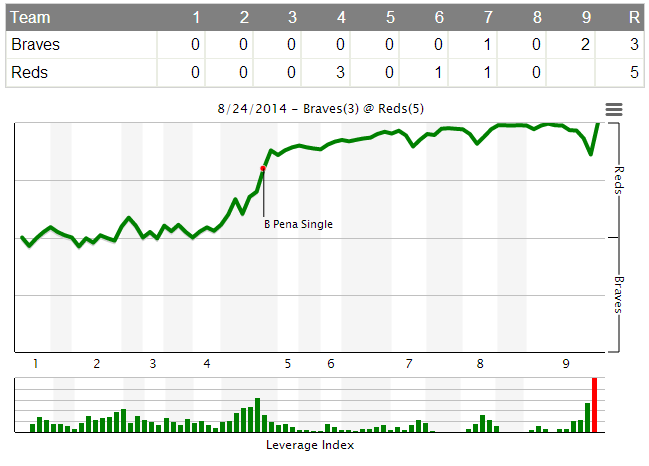 The Cincinnati Reds have won back to back games, after going 0-7 in the previous six days. Alfredo Simon gave the Reds seven strong innings of 1-run baseball, and the Reds offense scored 5+ runs for the first time since Monday. The Reds bullpen tried their hardest to give this game away, as the Braves loaded the bases down two runs in the ninth, but Broxton was able to wiggle out of the jam.

According to FangraphsÃ‚Â WPA statisticÃ‚Â (winning percentage added), the most important play of the game wasÃ‚Â Jonathan Broxton getting Justin Upton to ground into a fielders choice to end the game.Ã‚Â The play increased the Reds chances of winning by 13.7% (from 86.3% to 100.0%).

Alfredo Simon pitched really well today for the Redlegs. It was the first time in five starts that Simon made it into the 6th inning, and he recorded just his second quality start since the All-Star Game. He did an excellent job mixing speeds, and keeping the Braves hitters off balance, as noted by C. Trent.

Todd FrazierÃ‚Â hit his 22nd HR of the season in the 7th inning. It was the first HR by a Reds player since Tuesday against the Cardinals. Frazier is now 12th all-time in HR by a Reds 3B (minimum of 50% of games played at 3B). 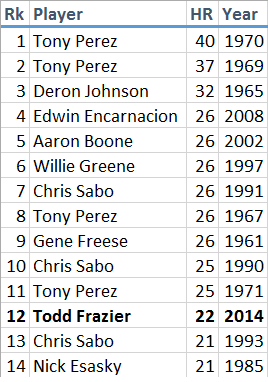 Another day, another great play fromÃ‚Â Zack Cozart.Ã‚Â Cozy alsoÃ‚Â had an impressive 3 hit day, along with 2 RBI.

Jay BruceÃ‚Â had a 2-hit afternoon.

Billy Hamilton went 0 for 4, and his OBP has now dropped all the way down to .296. Hamilton has really slowed down offensively in the second half, as he entered play today hittingÃ‚Â .228/.254/.301 with a 48 wRC+ since the All-Star break.

Logan Ondrusek tried to throw a fastball right down the middle of the plate to Evan Gattis. The result was Gattis’ 20th HR of the season.

Jason Heyward made a really nice play in the 4th inning.Ã‚Â Ryan Ludwick hit an absolute rocket with the bases loaded, and Heyward took a big hit away from Ludwick that would have blown the game open at the time. There is no coincidence that Heyward entered the day first in the entire MLB of any player at any position with 33 DRSÃ‚Â (Defensive Runs Saved).

Our old friendÃ‚Â Aaron HarangÃ‚Â didn’t pitch his best game of the year by any means, but he was just 1 out away from yet another quality start. It would have been his 22nd QS of the season, which would have tied him for the third most in the entire MLB. The only two pitchers with more are Felix Hernandez and Johnny Cueto, who both have 23 QS. That is cool for Harang, who was always such a class act here in Cincinnati.

The Giants are down 8-6 in the 7th as I type this to the Nationals. If that score holds, the Reds will be 6.0 games back from the second wild card spot. It is obviously still a very long shot, but the Reds still remain within reach from a playoff spot.