Aroldis Chapman owns a once-in-a-generation arm. But how many pitches does he use?

But shortly after Chapman took the mound for the first time in 2014, on May 11, that established wisdom began to crumble.Ã‚Â Much to the surprise and thrill of Reds fans, and the great dismay of Reds opponents, we all learned that the Cuban Missile hadÃ‚Â been re-calibrated. Aroldis Chapman had incorporated a lethal off-speed combination into his portfolio.

Much of the excitement was rightly focused on Chapman’s 90-mph changeup. By late May, Mark Sheldon had written that the new pitch was becoming a weapon. Jeff Sullivan of FanGraphs termed itÃ‚Â a cruel experiment, reasoningÃ‚Â that by adding a changeup to his major-league-best fastball, Chapman presented not one, but …

… two worst nightmares: a fastball high and tight, and a change-up. … But hereÃ¢â‚¬â„¢s by far the clearest idea of what the pitch can do for him, and for the rest of his repertoire. Against the changeup, batters have attempted 14 swings. Of those 14 swings, precisely zero have made contact.

Manager Bryan Price went on record predicting Chapman would continue to use it more (Sheldon):

“And it’s a good changeup;Ã‚Â it’s a really good changeup. I do believe that it’s going to be a much more substantial part of his repertoire than we’ve ever seen before, because not only is it a good pitch, it’s a controllable pitch for him, and it certainly plays well for a guy on those days when maybe he doesn’t have that plus-plus-plus velocity.”

Chapman’s changeup isn’t an equal opportunity nightmare. He doesn’t throw them to left-handed hitters. It torments strictly righties. But southpaws weren’t completely insulated from Chapman’s 2014 evolution as a pitcher.

In addition to adding a new pitch, Chapman also began throwing his slider more — double the rate of previous seasons. In early July, Justin Inaz wrote broadly ofÃ‚Â The New Aroldis ChapmanÃ‚Â and highlighted both the reliever’s change and slider:

And on top of that, he has a change-up that breaks almost 10 inches away from a righty, and then a slider that breaks in toward the right-handed batter’s back foot. Ã‚Â The change-up and slider break opposite directions and travel roughly the same velocity.Ã‚Â Chapman is throwing both of his secondary offerings much more often this year.

Justin went on to explain how Chapman’s new mix of pitches was helping his fastball.

But, concurrently, we’re seeing a spike in his fastball whiff rate. Ã‚Â So far in July, his fastball has induced the highest percentage of strikeouts of any month in his career. Ã‚Â It’s correlational, but it sure looks like the use of his change-up has strengthened the impact of his fastball.

“I think that with the reputation that he has, he can play off of that and be able to go out there and throw some different stuff and get some funky swings because guys aren’t used to seeing that. With that being said, his off-speed pitches, he’s sometimes been able to get them back into counts. We were 2-1 and he was able to drop a nice slider in there for a strike. He’s thrown a lot of 3-2 breaking balls. And they’re definitely not easy pitches to hit. Especially his changeup, it’s really tough to hit.”

By the end of June, 2014, not only had Chapman doubled the use of his slider but he was throwing the change up more than once every ten pitches. Chapman already had made five appearances where he threw his fastball less than half the time. Hitters Ã‚Â were facing a new-and-improved Aroldis Chapman. The numbers demonstrated he had taken domination to a new level. His swinging strike rate rose and the contact rate against him declined. Not surprisingly, his strikeout percentage rose to a career high.

July 9 and Beyond: Same as the Old Missile

Starting in early July, Chapman suddenly reverted to his pre-2014 pitch mix. The changeup almost completely disappeared. The data points to approximately July 9 as the inflection point.Ã‚Â This chart shows the month-by-month breakdown of Chapman’s pitches. The black line is his fastball. It trends downward into June, but then starts a steep rise. Both the slider and change-up track sharply downward. 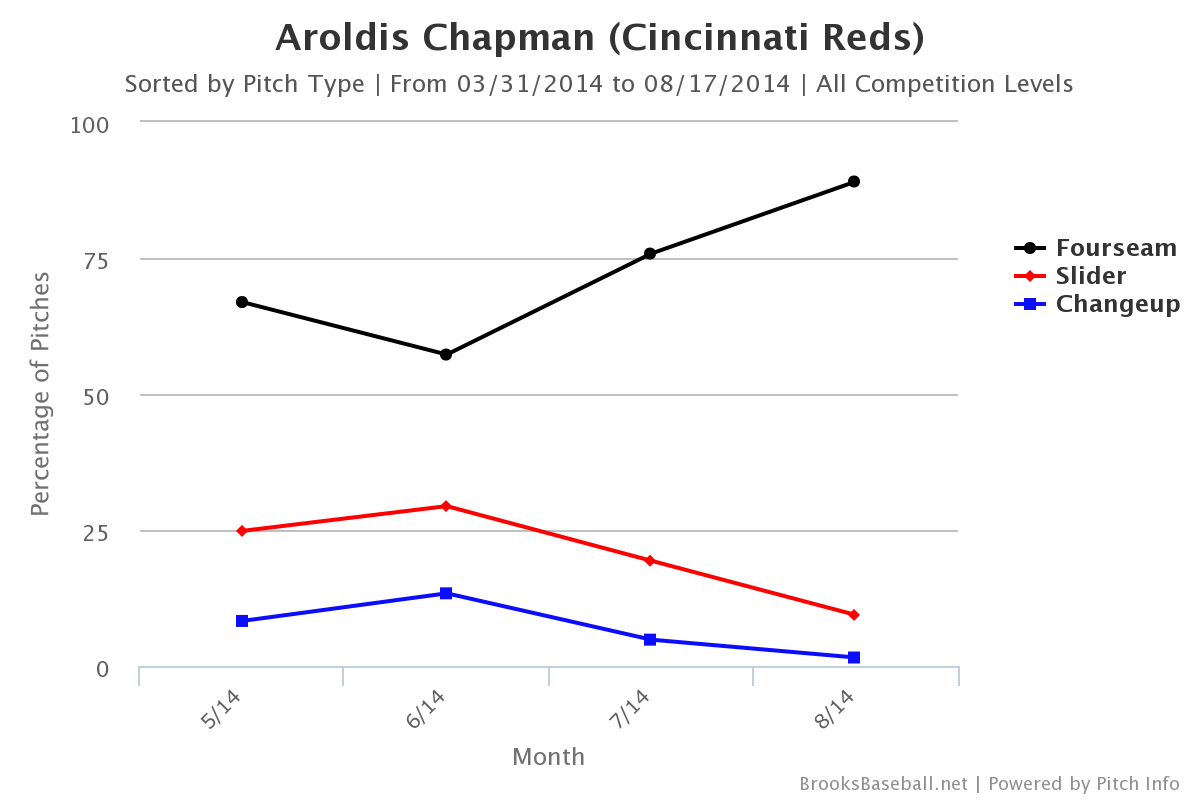 Table 1 (through August 20) demonstrates that Chapman has essentially reverted back to 2011-2013 in pitch usage. It also shows that after July 9, his swinging strike rate has begun to decline and the contact rate against him has inched back upward. (The two post-July lines reflect whether or not you want to count his recent four-walk appearance in Colorado. The line with the asterisk doesn’t include it.)

Remember the at bat on July 20 when Chapman faced Jacoby Ellsbury leading off the ninth inning inYankee Stadium. The game was tied. Ellsbury, a left-handed hitter, in what one Yankee blog calledÃ‚Â the best Yankee at bat of the year, fought off eight Chapman fastballs before slapping the ninth heater on the ground between Todd Frazier and Zack Cozart. I remember wondering why Chapman didn’t throw even one off-speed pitch.

But explanations that focus on his changeup miss the broader picture. Chapman has also cut the use of his slider back to 2011-2013 rates.

There has been little to no reporting onÃ‚Â whyÃ‚Â Chapman has suddenly abandoned his off-speed pitches. Maybe it has to do with his health. Could the balky hamstring that has bothered the reliever since before the All-Star game be aggravated by throwing the slider? Could the explanation relate to his sore shoulder that was reported yesterday?

[Update: Last night, in mop up duty, Chapman threw 13 pitches – seven fastballs, three sliders and three changeups. Maybe that’s a sign of positive things to come. Or maybe because the game was out of reach, he wasÃ‚Â more interested in working on the off-speed pitches.]

For two months, Aroldis Chapman 2.0 — complete with three effective pitches — was on display for our enjoyment. Chapman’s progression seemed to settle the debate over whether he could master more than one pitch. His expanded portfolio produced even greater dominance than previous years. It suggested that a more mature, consistent pitcher had arrived at age 26.

But it’s too soon to say. The closer’s month-long abstention from off-speed pitches has raised a few uncertainties, at least for the moment.

You know, sometimes the nearer your destination …

[Mike Maffie, who usually writes this column on Friday morning, is moving this weekend. Hopefully this relief pitching is more effective than the Reds bullpen lately. Thanks to a loyal Redleg Nation member at the University of Chicago for bringing this to my attention.]