[Ethan Lynn is a 24-year-old graduate student living in Provo, Utah. He attends Brigham Young University where he is pursuing an MA in TESOL. He grew up in Cincinnati and filed this report on the Billings Mustangs, the Reds rookie league affiliate, for Redleg Nation. — Thanks, Ethan!]

I grew up my whole life in Cincinnati. In fact, my dad was the head athletic trainer for the Reds from 1993-2002, and that’s the reason my family moved to Cincinnati. His name is Greg Lynn for reference. The Reds have not only been my love, but they have also supported my family. My connection runs very deep with the organization. Despite my location, the Reds will always be first and foremost for me.

Adjacent to Provo is the city of Orem. In total the area features over 100 thousand people. Orem is about a 45-minute drive south of Salt Lake City. It rests between the towering Wasatch Mountains to the east and the scenic Utah Lake (which actually feeds into the Great Salt Lake) to the west. A truly majestic stage for baseball.

Due to my studies, I haven’t been able to return home to the Queen City this summer. When I heard that the Billings Mustangs, the Reds rookie league team, were journeying southward to my neck of the woods I felt it my Redleg Nation duty to attend and support whatever part of the Reds I could. Here were my adventures as I invaded Brent Brown Ballpark, home of the Orem Owlz, the Angels affiliate.

The pre-game feast began in downtown Provo at the El Salvador Restaurant with my girlfriend Felicia. Provo has a fairly large Latino community and I earned my BA in Latin American Studies earlier that week, so I felt it was fitting to have an that kind of experience before the game. The main dish was called a pupusa, one of the most delicious foods in the world. That is another topic for another day. 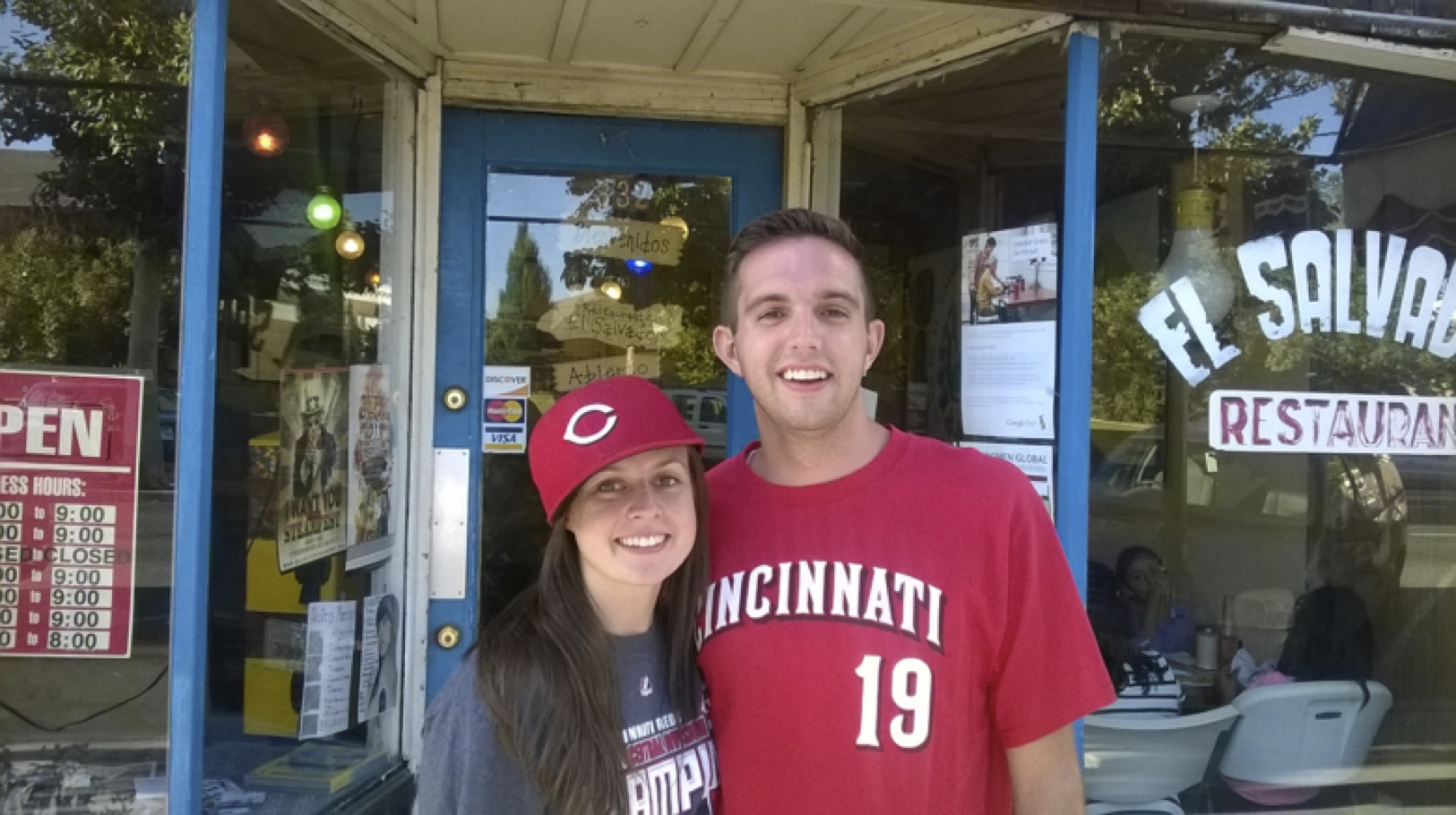 Felicia and Ethan outside of El Salvador Restaurant after a nice meal of pupusas.

As a note, Felicia is from the Milwaukee area and I have officially converted her to being Reds fan, except when playing the Brew Crew. With some more time her conversion will be complete.

The venue was Brent Brown Ballpark, home of Utah Valley University’s baseball team as well. It is a modest yet modern stadium. For a rookie ball field, it is high quality. 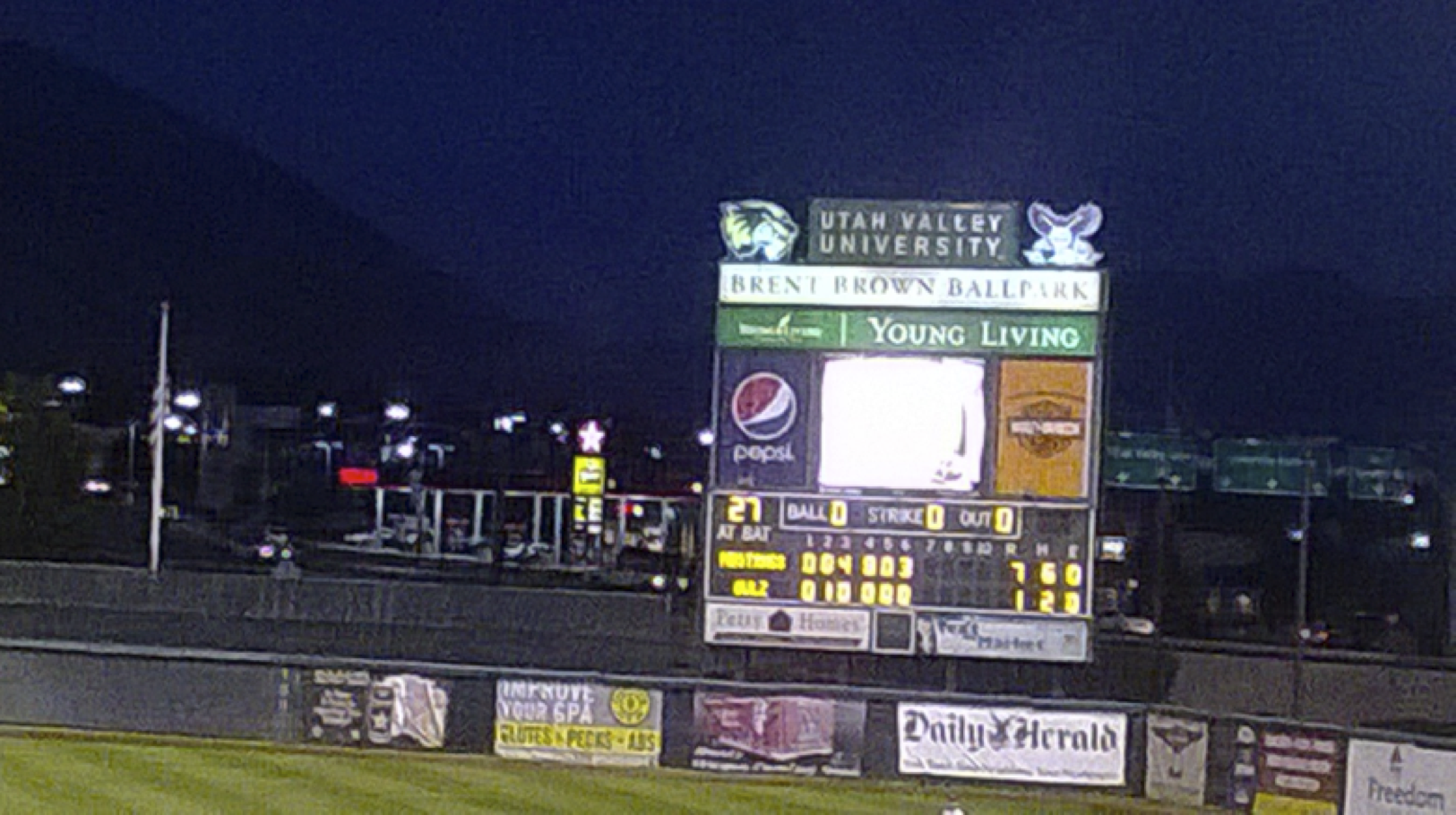 For only $12 apiece, we were able to sit two rows behind home plate. And in the row behind us were some of the Mustangs’ starting pitchers who were tracking pitches and keeping score for the starting pitcher, Luke Moran who threw six innings of one-run, two-hit ball. He gave up a first-pitch double to the lead-off hitter in the 1st and a solo shot in the 2nd. Other than that, he was in command for six innings. 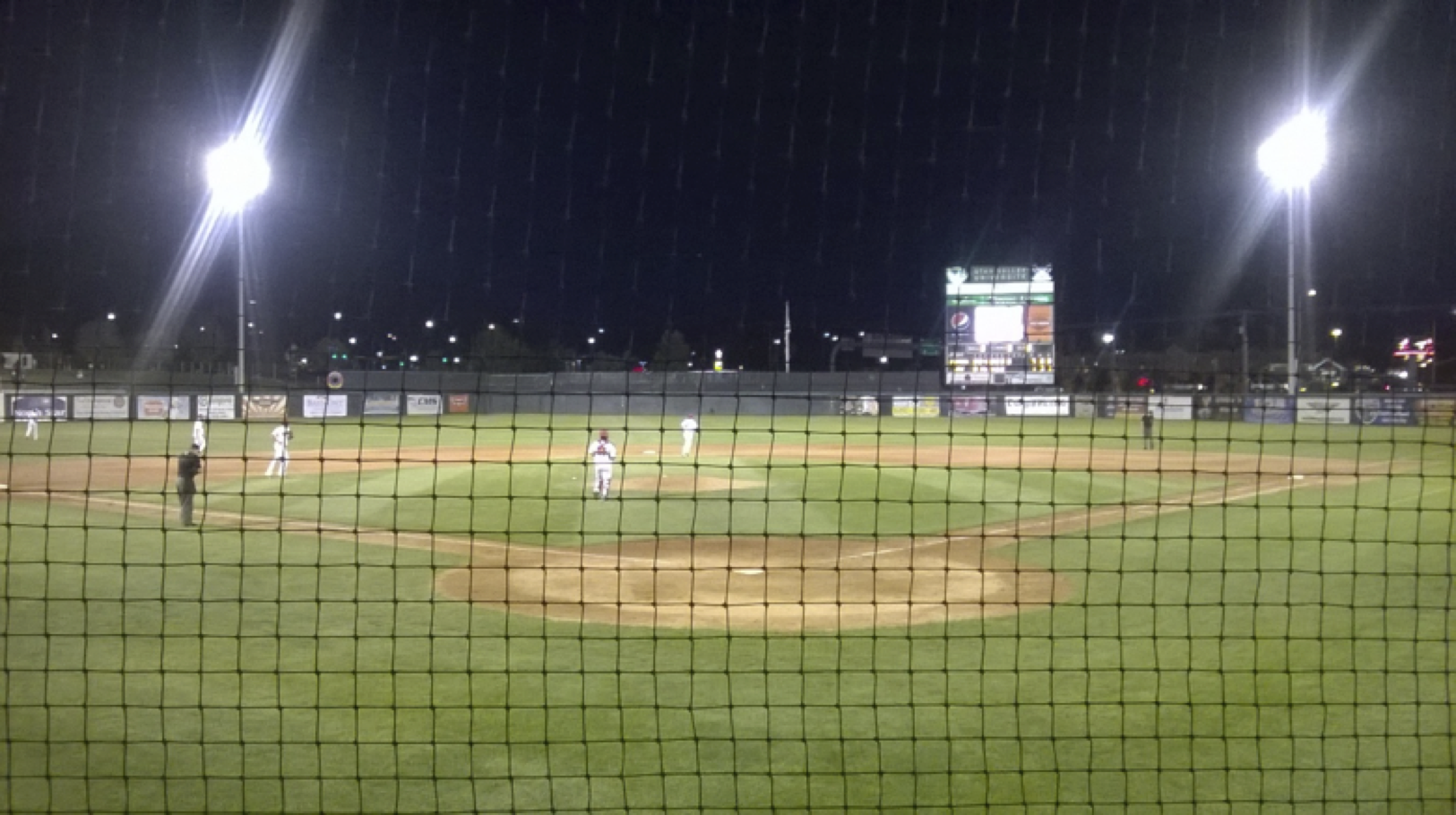 This was the view from our seats. You can’t get any better than this.

We befriended the 5th-round draft pick, Tejay Antone from Weatherford College in Texas. As I explained the intricacies of the game to my girlfriend, Tejay would interject periodically about his story. He was drafted straight from high school but elected to go to TCU. After only pitching 7 innings his freshman year, he transferred to Weatherford, a junior college. Due to draft rules and more playing time, Tejay was drafted and decided to sign with the Reds. I asked him if he was going to play in the AZL, and he responded that he might hit his innings limit.

We had an interesting conversation with the man next to us about arm durability. The argument was that taking too much time off and then starting back up on a throwing program can actually hurt the arm more than consistently working on the arm and shoulders year round. Tejay expressed that he preferred to keep his arm in shape and not rest it in the offseason but the Reds prohibited that and mandated a rest period. That was an interesting point that I feel could lead to healthy discussion and further debate. 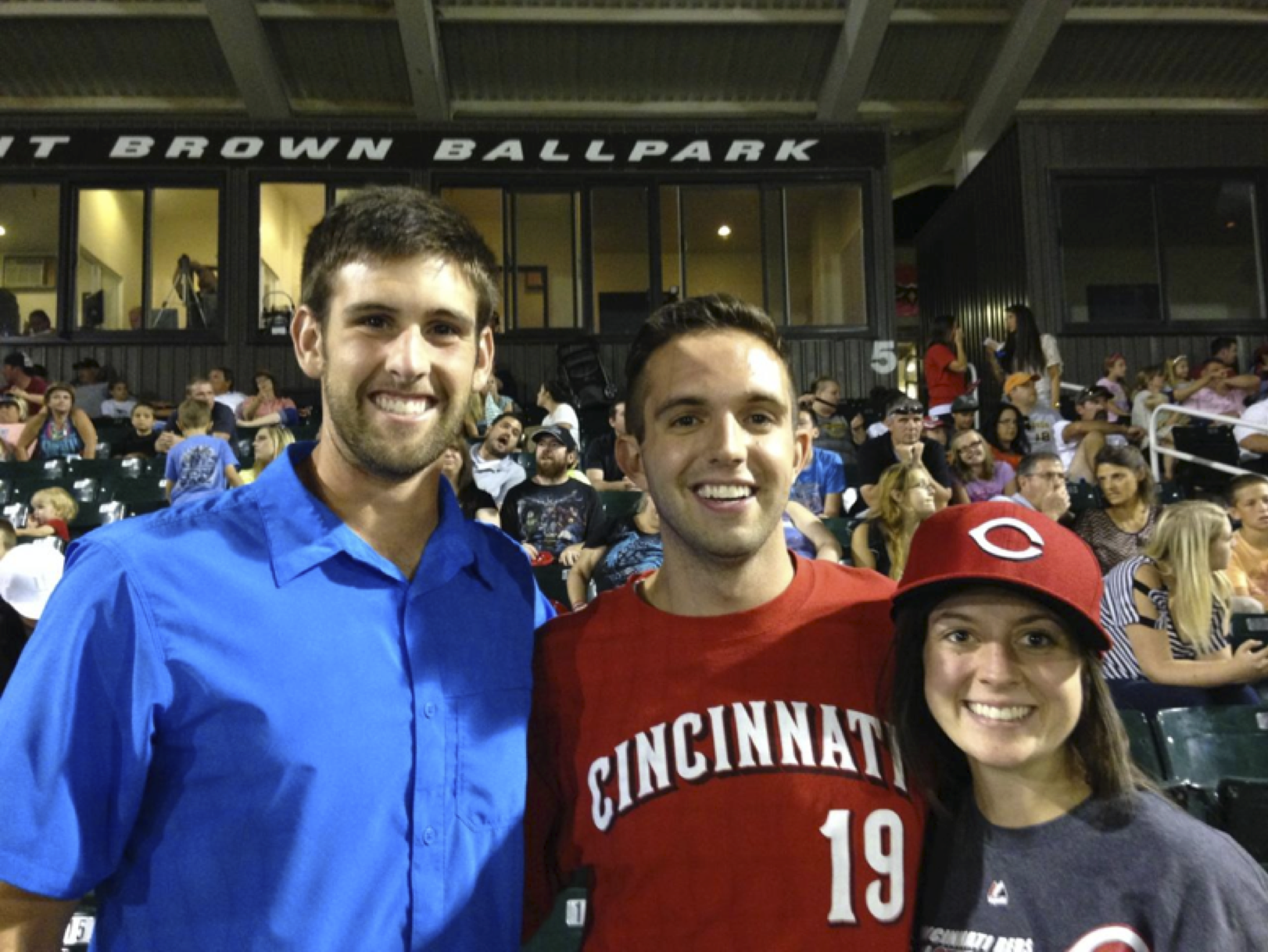 Tejay Antone (left) was the winning pitcher the next day as the Mustangs took game three from the Owlz 10-2.

The night we were there, the Mustangs out-pitched the Owlz and made fewer mistakes. The Mustangs played a much better game. Other than going behind 1-0 in the second, the Mustangs handled the Owlz. Knowing my limitations and relative lack of experience, I tried my hand at scouting some players. There are two that I want to mention in particular.

We decided to celebrate the victory by posing in front of the winning lineup card. 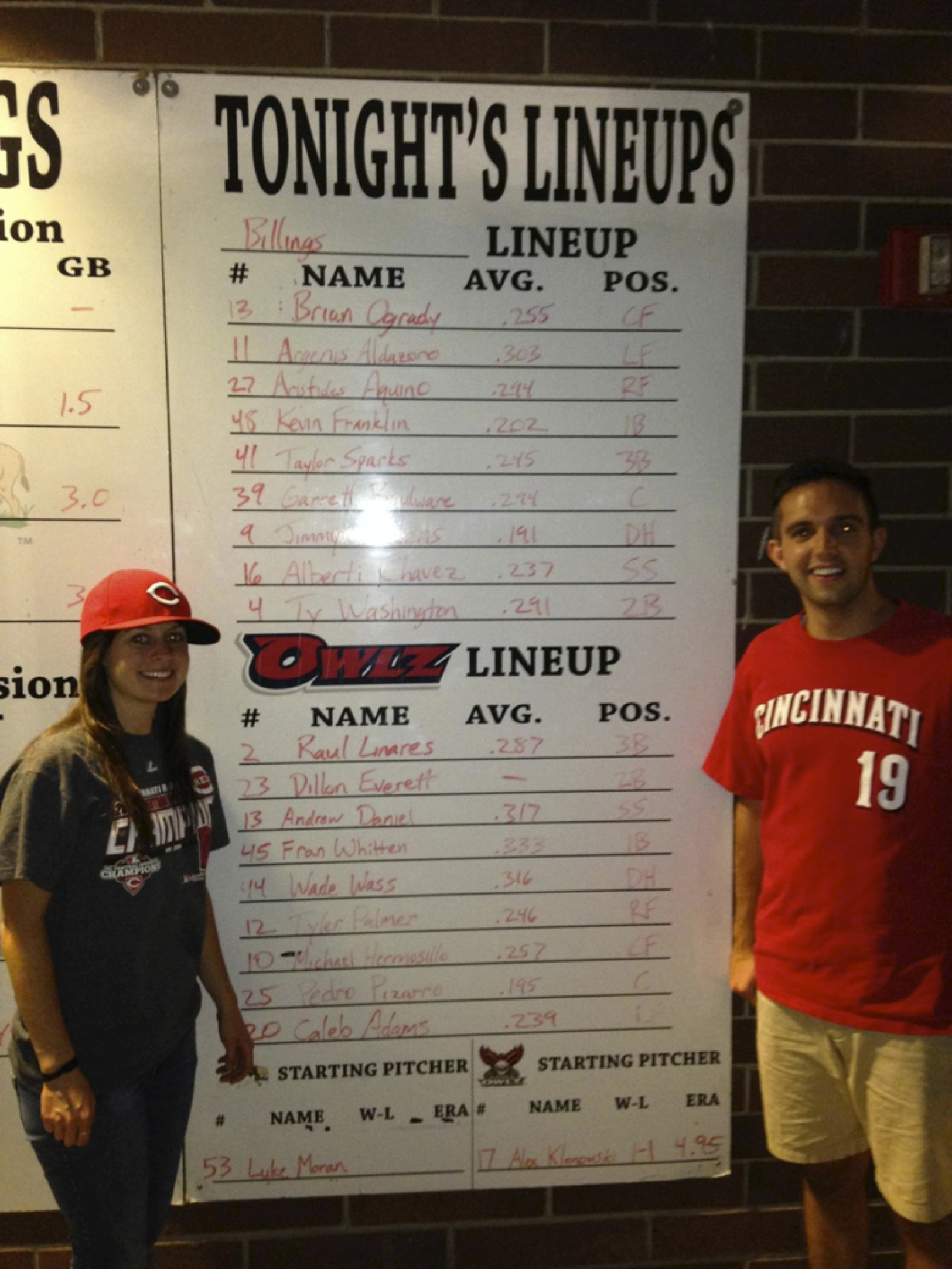 I want to thank the writers at RLN for letting me do this. It was a joy and a delight. I love the Reds and I am so glad that I could contribute in some small way to Redleg Nation!