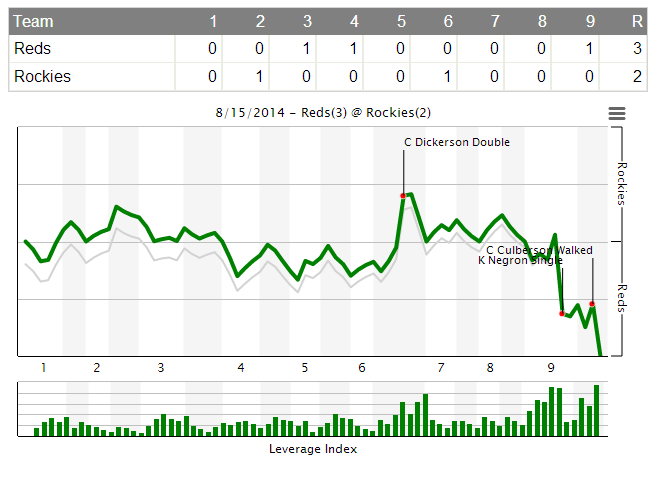 The Reds ended their three game losing streak with a 3-2 win. Cueto pitched 8.0 innings of two run baseball, and the Reds struggling offense was able to scratch across three runs against the Rockies, despite not having their two best hitters, Frazier and Mesoraco in the starting lineup. The Rockies scheduled SP, Franklin Morales was scratched from the start because of the birth of his child. The Reds got a bullpen game from the Rockies, who started former Red, Matt Belisle, and then brought in another former Red, Nick Masset immediately following Belisle.

According to FangraphsÃ‚Â WPA statisticÃ‚Â (wining percentage added), the most important play of the game wasÃ‚Â Kristopher Negron’s RBI single in the 9th inning, giving the Reds a 3-2 lead. That play increased the Reds chances of winning by 34.4% (from 47.1% to 81.5%)

Kristopher Negron is absolutely awesome. I love watching this kid play. His speed was very impressive in the first inning, when he bunted for a hit. He made some nice plays in the field, flying all over the place. He had fourÃ‚Â hits tonight, including the game winning hit in the 9th inning. Negron can play EVERY position except Catcher. He should be on the Reds roster next season, as the Reds utility guy. Negron is literally Santaigo and SchumakerÃ‚Â wrapped into one (as he fills the need of a backup SS and utility guy), except he is a significantly better defender, and has a lot more speed. 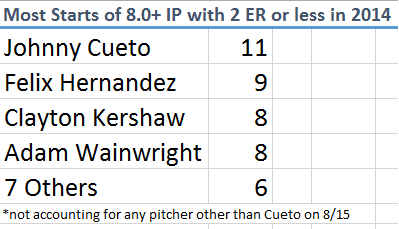 Jack Hannahan ended his 0 for 14 start to the season with a leadoff double in the fourth inning.Ã‚Â Ramon Santiago followed with a single to give the Reds a 2-1 lead.

Zack Cozart made a tremendous play in the 6th inning, just barely throwing out the speedy former Red, Drew Stubbs. Cozart entered play today with 19 DRS (Defensive Runs Saved), which is the most among MLB SS, and the 4th most of any player at any position in the MLB.

Ryan Ludwick went 1 for 3 with a walk tonight. This coming off last night, when he went 3 for 4 with a HR.

Aroldis ChapmanÃ‚Â got his 26th save tonight, but his incredible MLB record streak of 49 relief appearances with a strikeout came to an end. Chapman was a little shaky, as this was only his 4th appearance in August.

Jay Bruce went 0 for 5 tonight, and is now hitting .219/.299/.374 on the season. He did collect an RBI, which tied the game in the 3rd inning. It however came on a weak ground-out, when the Reds had runners on 2nd and 3rd base with 1 out. The play actually decreased the Reds chances of winning by 0.6%. I still believe in Bruce, but this has really been a tough season.

Brandon Phillips made his first rehab start for the Louisville Bats tonight. Phillips went 0 for 2 with a walk. Phillips could return as soon as Monday for the Cardinals series according to Bryan Price.

Of course Brandon Phillips makes a gold glove play in his rehab game.

Brandon Phillips has been to the plate three times tonight, and has seen six pitches. Was 8th worst in 2013, seeing 3.6 pitches per PA.

The Brewers are currently losing 2-0 to the Dodgers in the 5th inning as I type this. If the Brewers lose, the Reds will be 5.5 games back in the NL Central. 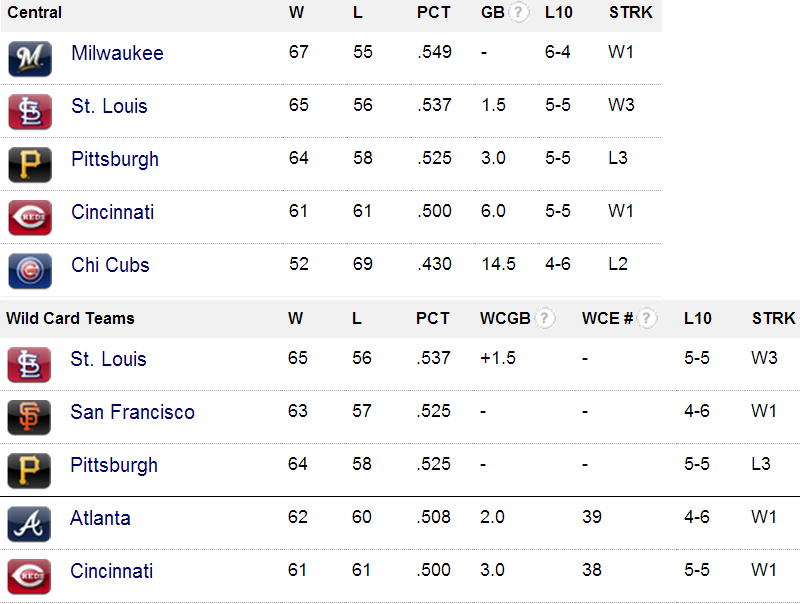