The Reds will travel to Denver for a four-game series with the Colorado Rockies beginning on Thursday evening. The Rockies have the worst record in Major League Baseball at 46-74. This is a crucial series for the Reds, who will enter play on Thursday 5.5 games back in the NL Central, and 3.5 games back from the second wild card spot. After this series, the Reds play three at the Cardinals (63-56), followed by four games at GABP against the Braves (61-59).

The injury bug has bit the Rockies pretty hard this season. Currently, the Rockies three best offensive players are on the DL: Troy Tulowitzki, Carlos Gonzalez, and Michael Cuddyer. The Rockies just got terrible news that Tulowitzki will have season ending surgery. Despite only playing in 91 games this season, Tulowitzki is still tied for the third highest WAR (5.1) in the MLB. His 173 wRC+ is also the highest in the MLB of any player with 300+ PA.

The Rockies offense is pretty good, but of course it gets inflated quite a bit because of Coors Field. Their offensive numbers also feature 91 games of Troy Tulowitzki posting a 173 wRC+. The Rockies have an MLB best .879 team OPS at Coors Field (78 points higher than any other team), but have a .660 OPS on the road (27th in the MLB). 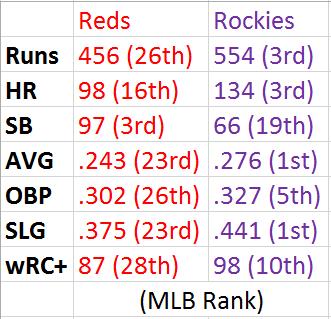 The pitching matchups in this series give the Reds a strong advantage, especially on Friday and Sunday with Cueto and Latos. In those two games the Reds will beÃ‚Â going against Morales, a pitcher who has struggled all season, and Flande, a pitcher making his 9th career big league start.

Thursday nights matchup does however beneift the Rockies, despite Simon having a significant advantage in ERA and WHIP. If you look closely at the peripheral numbers (FIP, K/9, HR/9), de la Rosa has an advantage over Simon (although Simon does do a much better job at not hurting himself in BB/9). Those peripheral numbers are even more important in a such a hitter friendly ballpark like Coors Field. Simon also has a 4.78 ERA/5.06 FIP since the all star break, while de la Rosa has a 3.66 ERA/3.34 FIP since the break.

Saturday’s matchup will be the big unknown. C. Trent Rosecrans reported that Homer Bailey will be going on the DL. The Reds have still not made the move official, and there is no word on who will start in Bailey’s place. Bailey had been absolutely terrific of late. In hisÃ‚Â last 13 starts, he had posted a 2.65 ERA, 0.99 WHIP, 75 K, 25 BB. Jordan Lyles has had a pretty solid season for the Rockies, with numbers very similar Bailey’s. 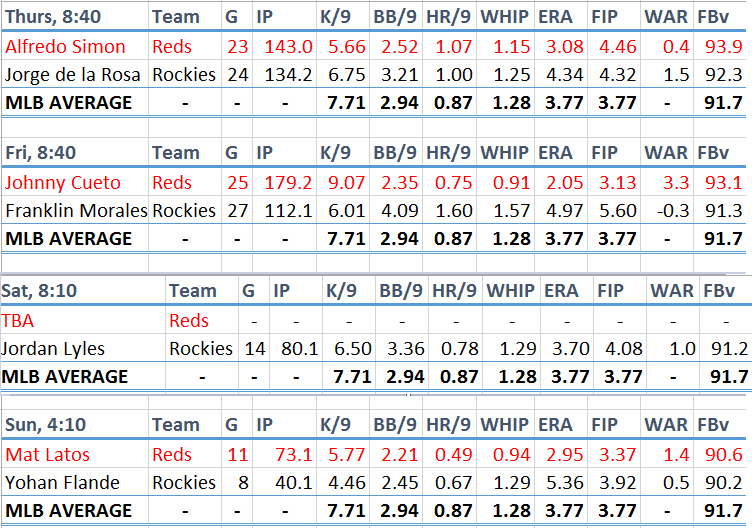 Both the Reds and the Rockies have struggled with poor bullpen production this season. The difference in the two teams bullpens is that the Reds have Chapman and Broxton in the back end. The Rockies don’t have a single great reliever. It would certainly be in the Reds benefit to tap into the bullpen early and often in this series. 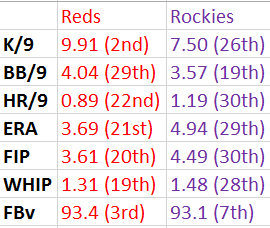 The Reds have one of the best defenses in baseball, if not the absolute best. The Rockies are about average. This should give the Reds an advantage in this series. It will also be exciting to see Billy Hamilton (who has 8 Defensive Runs Saved this season) get to play in a big outfield.

The Rockies have a very good infield defense, with 3B Nolan Arenado (16 DRS) and 2B D.J. LeMahieu (15 DRS). Their outfield defense is about average: Charlie Blackmond (3 DRS), Drew Stubbs (-1 DRS), and Corey Dickerson (-3 DRS).

This is a big series for the Reds. Time is really starting to run out in the 2014 season. Four games against the worst team in the MLB gives the Reds a big chance to gain some ground. The Brewers will be playing three games against the Dodgers this weekend, and the Pirates will be playing three games at Washington. If the Reds starting pitching can hold their own (which I believe they will do), and the offense can do just enough in a very friendly ballpark, I don’t see any reason why the Reds can’t win at least three of four.