The Reds lost the first of a two game series to the Red Sox 3-2. The Reds got off to a 2-0 lead in the first inning, after a good patient inning (the Reds saw 31 pitches in the first inning off Red Sox starter Joe Kelly). Mat Latos gave the Reds seven strong innings, allowing just one run, but Jonathan Broxton couldn’t hold the lead in the 8th inning. Broxton gave a up 2-run home run to Yoenis Cespedes with 2 outs. Meanwhile, Arolids Chapman was saved for a “save situation” that never occurred. 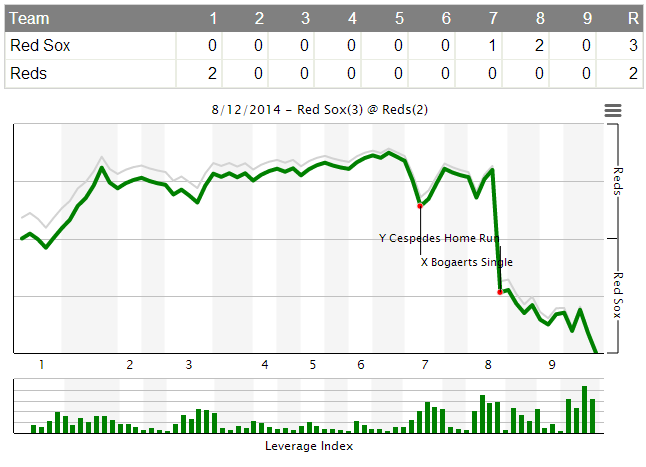 According to FangraphsÃ‚Â WPA statisticÃ‚Â (wining percentage added), the most important play of the game wasÃ‚Â Yoenis Cespedes 2-run HR off Jonathan Broxton in the 8th inning, giving the Red Sox a 3-2 lead.Ã‚Â That play decreased the Reds chances of winning by 54.4% (from 79.9% 26.5%).

The Reds offense forced Red Sox starter Joe Kelly to throw 31 pitches in the first inning.Ã‚Â Billy HamiltonÃ‚Â lead the game off with a lead-off, four-pitch walk. He then stole second base, and advanced to third base on an errant throw.Ã‚Â Jay BruceÃ‚Â didn’t force things with a runner on third base by swinging at a pitch out of the strike zone to drive in a run, and drew a tough 7-pitch walk. That helped the Reds put a crooked number up on the scoreboard.Ã‚Â Todd FrazierÃ‚Â battled, and on the 7th pitch of his at-bat, reached out and hit a single to give the Reds a 1-0 lead.Ã‚Â Devin MesoracoÃ‚Â ripped the 5th pitch of his at-bat for an RBI single, and that gave the Reds a 2-0 lead. It was certainly a breath of fresh air to see the Reds really work a starting pitcher early.

Devin MesoracoÃ‚Â is an absolute stud, and is having one of the best years ever offensively by a Reds catcher (you would know this if you read my article on Mesoraco from yesterday *shameless plug*). Mesoraco went 3 for 4 tonight, and is now hitting .300/.371/.586 on the season. Oh, and we can put this Mesoraco doesn’t hit as well higher up in the lineup to bed as well. Since July 28th, Mesoraco has batted exclusively 4th in the Reds lineup. He has hit .333/.404/.627.

Bryan Price decided to once again go to his “old-school” bullpen management, and it killed him tonight. Against the top of the Red Sox order, in a 1-run game, in the 8th inning, Price went to Broxton instead of Chapman (saving him for a save situation in the 9th inning that may or may not be there). Even after Holt singled, and the left-handed batting David Ortiz came to the plate, Price stuck with Broxton. He was able to get Ortiz out, but slugger Yoenis Cespedes was a different story. Cespedes hit a ball a mile off a Broxton, and gave the Red Sox a 3-2 lead. Price said it would be different with him as the Reds manager. He said he wouldn’t limit Chapman only to the 9th inning, but he has. Tonight, it most likely cost his team a crucial game. And to anyone defending Price for this move because of Broxton’s 1.07 ERA and 0.81 WHIP entering tonight, do you really think Broxton gives you a better chance getting through Ortiz and Cespedes than Chapman? Broxton entered today with a 3.14 FIP, Chapman entered today with a 0.66 FIP.

Price also allowed a hitter with a .567 OPS to hit with 2-outs in the 9th inning, down a run. He had Ryan Ludwick available, but decided he would let Ludwick see the conclusion of the game from the on-deck circle.

During the Reds impressive bottom of the first inning when they forced 31 pitches, Brayan Pena hit into a first pitch double play with the Reds having runners on 1st and 2nd. Prior to Pena’s GIDP, Red Sox starter Joe Kelly had thrown 22 balls and 18 strikes. He was struggling to throw strikes, and Pena let him off the hook by hacking at the first pitch, resulting in two outs.

TheÃ‚Â Reds offense was unable to score after the first inning. Par for the course.

The Reds fortunately didn’t lose any ground in the NL Central race, and remain 5.5 games back as the Brewers lost. They are still 2.5 games out of a wild-card spot, as the Cardinals lost tonight too. The Reds might not have lost any ground tonight, but with only 43 games left, the Reds are running out of time to make a run.

The Reds got some bad news in the pre-game.Ã‚Â Homer Bailey will not make his scheduled start tomorrow, due to “stiffness in his right elbow and forearm.” The Reds will use the day off yesterday to push Bailey back to starting on Saturday. Let’s hope this is just a precautionary move, and not something that will bug Homer for long.Ã‚Â Over BaileyÃ¢â‚¬â„¢s last 13 starts, he has posted a 2.65 ERA, 0.99 WHIP, 75 K, 25 BB. He has been even better in his last 7 starts: 1.61 ERA, 0.84 WHIP, 37 K, 14 BB. The Reds rotation for the rest of the week will be:

This Nick is with that Nick. I think Dunn would be a good addition for the Reds. If you were to put Dunn in tonight’s lineup playing 1B, his .770 OPS would be the third highest (behind Frazier and Mesoraco). Dunn is in the final year of his contract with the White Sox, and I would assume he could probably pass through waivers. He could be the offensive upgrade the Reds need until (if) Votto returns, and then could be a really great weapon off the bench as a pinch-hitter (and no, he can’t still play LF). I certainly don’t know Dunn, but I would assume he would love that kind of role with the team he came up with late in his career. I don’t even know if the White Sox are looking or willing to move Dunn, but just a thought.