Brad Penny hadn’t started a major league game in almost three years. His final season starting Penny posted an ERA and FIP above 5.00. But through a combination of missed opportunities, bad third-base coaching, good defense by the Marlins, and most importantly, the Terrible Reds OffenseÃ¢â€žÂ¢, the Reds managed to score just one earned run in five innings off the 36-year-old. Three relievers combined to hold the lead over the last four innings.

In related news: The Marlins have announced that Kevin Brown will start against the Reds tomorrow.

The Reds are lucky the Marlins bunted in the first inning. While the home broadcast team was cheerleading for the Miami offense for PTGTRW, five of the first eight Marlins were reaching base — and only scoring one run — thanks to the rally-killing sacrificed out in the middle of it. As Hall of Fame manager Earl Weaver said, if you play for one run, that’s all you’ll get.

Alfredo Simon was fortunate to allow only two runs. He gave up four hits and five walks in five innings. In Simon’s five starts after the All-Star break, he’s pitched five or fewer innings in four of them. It might have been Bryan Price’s concern for heavy demand on the bullpen tonight that caused him to leave Mike Leake in an inning too long last night. Simon also missed an easy defensive play at 3B that cost the Reds a run.

Sam was LeDisease tonight, giving up two runs in the sixth inning.

Jumbo Diaz struck out the dangerous Casey McGeehee on a pitch that only missed the batter’s head because it was too high. He also retired the Marlins in order in the seventh. Jumbo was large.

Zack Cozart and Kristopher Negron combined for a smart defensive play to force an out a third base with runners at first and second.

Good managing: Using Broxton and Chapman when the Reds were behind, but close. The Cuban MIssile, who hadn’t pitched since August 1, fired 102, 102, 102, 103 to Giancarlo Stanton. “A little Louisiana bayou.” – Jeff Brantley. (See, the pitch was already in the catcher’s mitt when the batter swung. Play on the word “bayou” as in “by you.”)

Bad managing: Having Billy Hamilton bunt with Heisey on first in the ninth, especially when the count got to 3-1, a massive hitter’s count. Hamilton is hitting .412/.630/.765 on 3-1 counts. Don’t bunt in that count.

Holy cow. The Reds are impossiblyÃ‚Â terrible on the bases. 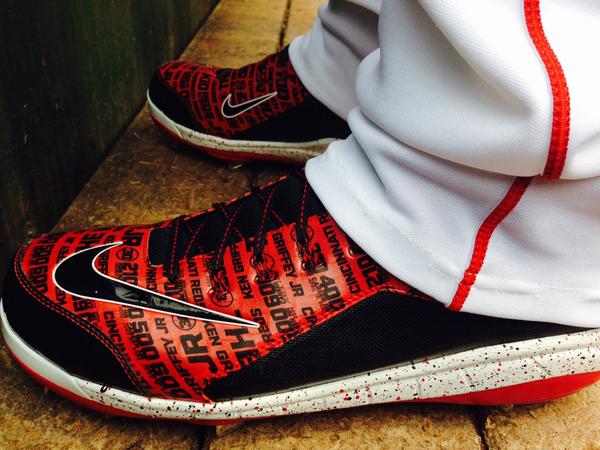