The Reds were able to get their second win of the second half, beating the Diamondbacks 3-0. Leake, Broxton, and Chapman combined to pitch a five-hit shutout, and the Reds offense scored their most runs since last Tuesday. 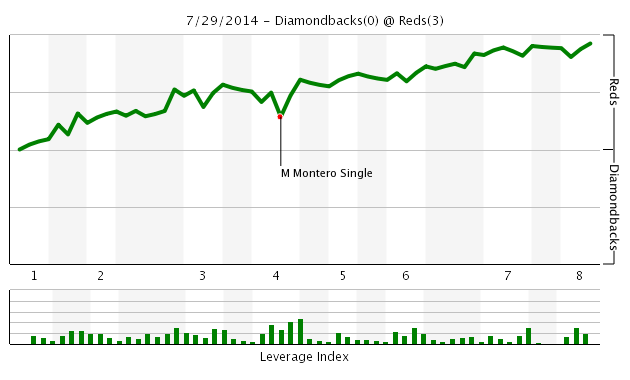 According to FangraphsÃ‚Â WPA statisticÃ‚Â (wining percentage added), the most important play of the game wasÃ‚Â Mike Leake’s RBI single in the second inning, giving the Reds a 2-0 lead. The play increased the Reds chances of winning by 9.4% (from 66.8% to 76.2%).

Other important plays (+/- indicates how much each plays increased or decreased the Reds chances of winning the game):

Mike Leake was absolutely terrific tonight. As “The Cowboy” stated many times during the broadcast, Leake’s control was absolutely pinpoint tonight. Leake didn’t walk a single batter, and struck out 8. The Diamondbacks best hitter, Paul Goldschmidt, went 0 for 4 with 2 strikeouts against Leake. Our guy made some very good pitches in the four plate appearances against last years NL MVP runner-up.

Billy HamiltonÃ‚Â lead the game off with a double, which broke a brutal 0 for 15 skid. The Reds only had one extra base-hit in 15 innings yesterday, so a leadoff double to start the game from Hamilton was huge.

Todd FrazierÃ‚Â had an RBI single later in the 1st inning, scoring Hamilton. A run in the first inning was huge for the Reds struggling offense. Frazier finished the evening going 2 for 4, including grabbing his 16th stole base of the season.

Mike Leake had an RBI single with 2 outs in the 2nd inning. It scored Donald Lutz, who singled earlier in the inning. The single came following a challenge won by the Bryan Price (Zack Cozart was originally ruled out on an infield single). The run in the second inning gave the Reds their first consecutive scoring innings of the second half (via the FSO broadcast).

Brayan PenaÃ‚Â had an RBI single in the 6th inning, driving in Frazier, and giving the Reds a 3-0 lead.

Ramon Santiago made a couple really nice plays in field. He has done an excellent job in the field for the Reds filling at 3B, SS, and 2B. Santiago should always start at second base over Skip Schumaker.

Jonathan Broxton came in with two runners on base, with two outs in 8th inning. He got Mark Trumbo to fly out to end the inning.

Aroldis ChapmanÃ‚Â recorded his 100th career save (his 23rd of the season), pitching a perfect 9th inning. Chapman extended his MLB record 45th consecutive appearance streak with a strike out. He struck out the final batter of the game, former Red Didi Gregorious on a 103 MPH fastball.

Mike LeakeÃ‚Â andÃ‚Â Todd FrazierÃ‚Â both had throwing errors in the 4th inning, which allowed the DBacks to have runners on 2nd and 3rd with 1 out. Leake was however able to rebound by striking out Trumbo, and getting some defensive help by Ramon Santiago (he made a nice running catch on a ball in no-man’s land).

TheÃ‚Â Reds offense has still yet to score more than 3 runs in a game in the second of the season (11 games). Quite simply, you aren’t going to win many games with this little offense.

I get tired of constantly mentioning it (probably as much as you get tired of reading it), but I am tired of Price running outÃ‚Â Skip Schumaker, night in and night out. Schumaker got the start in RF tonight, his 8th start in the Reds last 9 games. Schumaker entered today with -0.9 WAR this season, and -1.9 WAR since the start of 2013 (4th worst in the MLB). To be brutally honest, he is a bad hitter, a bad fielder, and a bad base-runner. At least with Ludwick, you have a decent hitter, and with Heisey you have a great fielder and base-runner. Schumaker went 0 for 3 tonight, and is now hitting .234/.282/.309.

Jay Bruce was placed on the bereavement list after his grandfather passed away earlier this week. Bruce plans to return to the Reds on Friday.Ã‚Â We certainly send our thoughts and prayers to the Bruce family.

Walt Jocketty will have some decisions to make before the trade deadline at 4PM on Thursday. The Reds are 6.0 out of the division and 4.5 games out of a wild-card spot as I type this. My personal feeling is that the Reds are the out of the race and should be sellers. Fangraph’s has the Reds with a 2.3% chance of wining the division, and with a 5.1% chance of getting a wild card spot. While there have certainly been more improbable teams reach the playoffs in the past, the Reds offense is really bad right now. I have a hard time believing a guy like Byrd or Rios would get the Reds to the playoffs. With that all said, I think the Reds should look to trade one or two of Cueto, Latos, Leake, or Chapman. All of those pitchers contracts expire at the end of next season. From everything we have heard over the last week, the market for good starting pitchers is extremely high. I believe it would be in the Reds best interest to trade one or two of these guys that they aren’t going to sign anyways after next season. The Reds could potentially get two or more top prospects, and would have around six years of control of those players for a low cost. Would that be worth one season of a goodÃ‚Â pitcher?

Tweets of the Night

Orioles up 2-1 now over Angels. Only other run so far belongs to the Reds (not a typo)