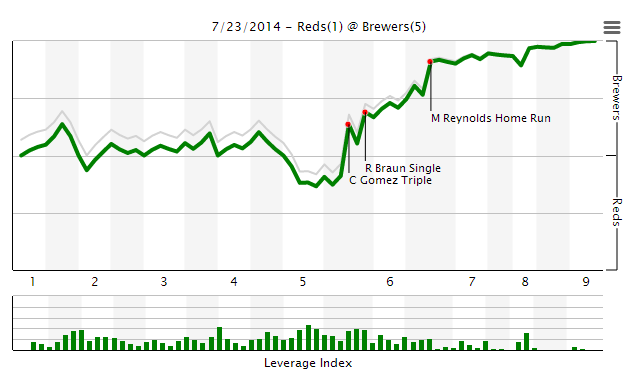 The Reds got swept again, and are now 0-6 in the second half. The Reds have fallen to 5.5 games back in the NL Central.

The offensive woes continue.Ã‚Â The Reds have scored just 12 runs in 6 games in the second half. They have struck out 51 times, while walking just 8 times (our own Chris Garber wrote about this earlier today). You simply aren’t going to win many games with that kind of offensive production.

According to FangraphsÃ‚Â WPA statisticÃ‚Â (wining percentage added), the most important play of the game wasÃ‚Â Carlos Gomez RBI triple in the 3rd inning, tying the game at 1.Ã‚Â That play decreased the Reds chances of winning by 22.5% (from 58.9% to 36.4%). Other important plays (+/- equals how much each play increased or decreased the Reds chances of winning):

Ramon SantiagoÃ‚Â made a tremendous play filling for Zack Cozart today in the second inning. He had to drive to right, get up, and make a perfect throw to get Kris Davis out.

J.J. Hoover pitched a perfect 7th inning for the Reds, striking out 1. That is good to see from Hoover, as he had allowed 6 ER over his previous three appearances.

Jumbo Diaz gave up a homer to Mark Reynolds. It was Reynolds second homer of the afternoon.

I get tired of complaining about the Reds manager, but seriously? He put Pena third in his lineup and Mesoraco sixth today. Even though a move like that doesn’t usually make a drastic impact on the game, it is just a poor decision. There is no excuse for batting a guy who has an OPS of 36 points higher than last year NL MVP sixth in your lineup, and batting a guy with a career 78 OPS+ third. The Reds have clearly struggled to score runs, and that move only makes it even more difficult.