[Edit.: This post was submitted by Cory Juliano (nyredfanatic). He and his wife, pictured below, attended Friday night’s game at Yankee Stadium. Thanks! — spm]

Since moving to Long Island four years ago, I only get one chance a year to see the Reds play when they square off against the Mets. As I side bar, I really love Citi Field and enjoy going there. I highly recommend seeing Ã‚Â a game there if you have the opportunity. This year I got the privilege of seeing the Reds twice thanks to inter-league play.

This was my second trip to Yankee Stadium and it was a much more pleasant experience. My previous experience was a rough one. A baseball game with the temperatures over 100 degrees with a wife who was seven months pregnant was probably not the best idea. I never really had any desire to take another trip to Yankee Stadium until a good friend offered us to go with him and his family.

Fighting NY traffic on a Friday is never fun which proved to be the biggest frustration of the evening. Paying $20 to park several blocks, one mall, a giant parking garage, and three little league diamonds away was a close second. The surroundings of Yankee stadium are really nothing to take note of. A few sports bars and a lot of little venders selling #2 jerseys were the only other real attractions going on.

One thing that stood out to me as a visitor as we approached the stadium was that those fans LOVE their Yankee jersey. I spent the walk tricking the daughter of my friend into rooting for Reds players since she could not name anyone on the roster other than Derek Jeter. She was all set to be yelling Ã¢â‚¬Å“Go Billy HamiltonÃ¢â‚¬Â until my wife couldnÃ¢â‚¬â„¢t contain he laughter anymore.

Yankee Stadium is beautiful and clean from the outside. They have done a good job making it look like a museum or historical building that occasionally hosts baseball games. This is vastly different than a lot of the stadiums I have been to. It was not necessarily Ã¢â‚¬Å“fan friendly.Ã¢â‚¬Â They let the fact that it is Yankee Stadium speak for itself and have the game entertain people. And it sort of works. 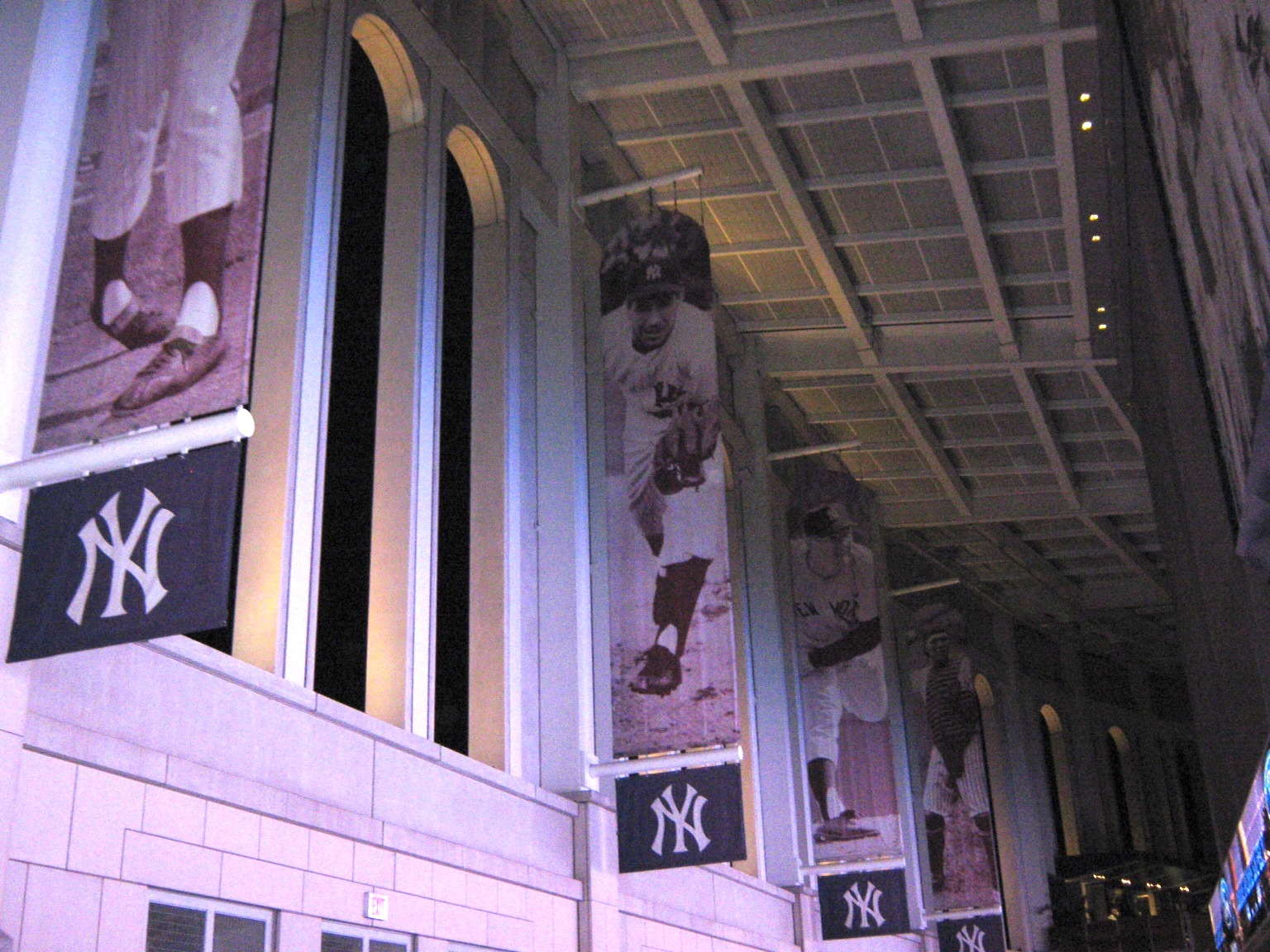 The one thing setting Yankee Stadium apart is walking in and Ã¢â‚¬Å“feelingÃ¢â‚¬Â baseball history around you. They have done a good job capturing the spirit of the Yankee tradition even in a newer ballpark. You know it is a new park but you get the feeling that you are walking into one of the great stadiums of history.

It really makes me wish I had a chance to see the original. Getting a glimpse of Monument Park, seeing the flags and banners of all 27 of their championships, pictures of the old greats, and retired numbers beyond the left centerfield seats make you realize this really is a great organization … no matter how hard that is to admit. I could have done without the giant wall painting of George Steinbrenner behind the bleacher seats.

All of that nostalgia was put to rest a bit when I noticed the ticket prices! No wonder they can afford nearly any player on the planet. The prices of the concessions were not much better. $9.75 for a beer.Ã‚Â When I joked about the price the vendor assured me, Ã¢â‚¬Å“Yea, but this baby is ice cold!Ã¢â‚¬Â I wonder if I could have struck a deal for a lukewarm one. Although the $5 Johnny Rockets vanilla milkshake may have been worth it. That thing was awesome. This was a slight cover for the mediocre $12 chicken fingers and fries.

The fans I ran into at Yankee Stadium were all friendly to a guy wearing a Johnny Bench jersey. They didnÃ¢â‚¬â„¢t seem to care too much when I admittedly cheered a little louder than necessary for Brayan PenaÃ¢â‚¬â„¢s first of 2 homeruns. This sparked one of the more humorous conversations of the night. I was sitting next to an elderly couple wearing Yankee jerseys. I cannot stress the jerseys enough, they were everywhere. The older gentleman leaned over after I had stopped cheering and sat down and asked Ã¢â‚¬Å“Is that the guy who just played in the All-Star game for you?Ã¢â‚¬Â I chuckled and told him no, he is actually our back-up catcher and our starting catcher was the All-Star. He then said Ã¢â‚¬Å“Oh, so you have him playingÃ‚Â DH in the American League games.Ã¢â‚¬Â I laughed a little harder and said Ã¢â‚¬Å“No, he is playing first base since Joey Votto is hurt.Ã¢â‚¬Â This started several minutes of conversation on how the Reds did not in fact have a backup first baseman. Amazingly, he was shocked that a team would not have a backup first baseman. It was fun hearing from a Yankees fan about what he thought his team would have done if they lost their star player for an extended amount of time. Go out and get someone else to play! Ah the Yankee way. 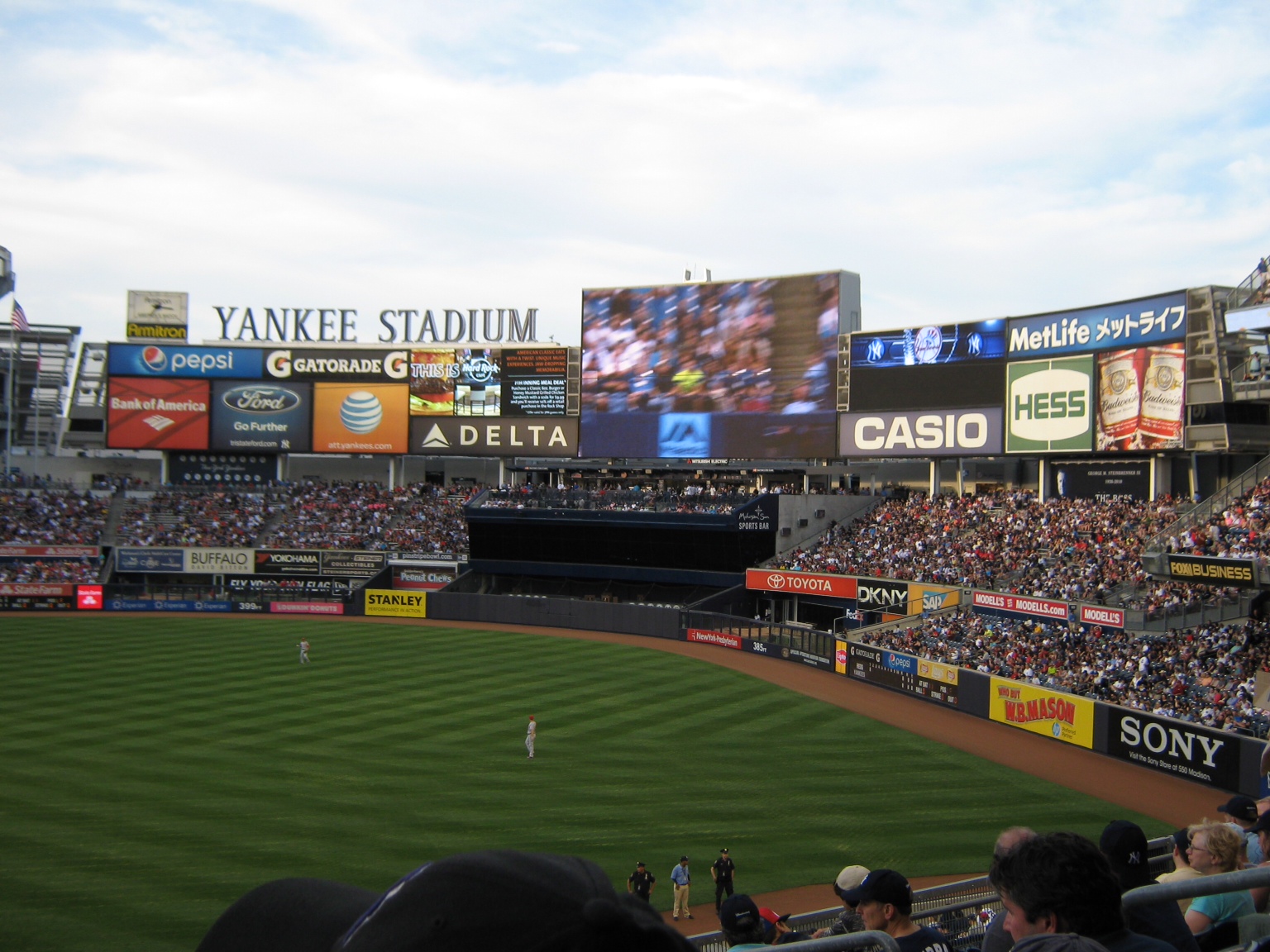 The other thing I will remember about my trip to Yankee Stadium was seeing Derek Jeter play in his final season. I have never heard a stadium cheer for a player as loud as Yankee fans cheer for #2. It is incredible … and obnoxiously overdone. The ovation was nice when he was announced on his first plate appearance. It is a really cool touch how they use a voice recording of Bob Sheppard, the late PA announcer of fifty some years, to call Jeter to the plate. Just another touch of trying to keep the Yankee tradition front and center.

The applause Jeter got anytime he was did anything on the field got a little old. I have never heard 47k people go nuts when a SS makes a routine play. They went crazy when a ball hopped over Todd FrazierÃ¢â‚¬â„¢s glove for what should have been an error. The place erupted when he scored a run. Jeter made a nice play down the third base line on a blooper by Billy Hamilton that you would have thought was a replay to his running into the stands to make a catch based upon the cheers from the crowd. He still got cheered when he made a fielding error. I really donÃ¢â‚¬â„¢t think he can do anything wrong in the eyes of Yankee fans. I will give them credit though. Yankees fans do know how to treat the great ones even if it is a little overdone. 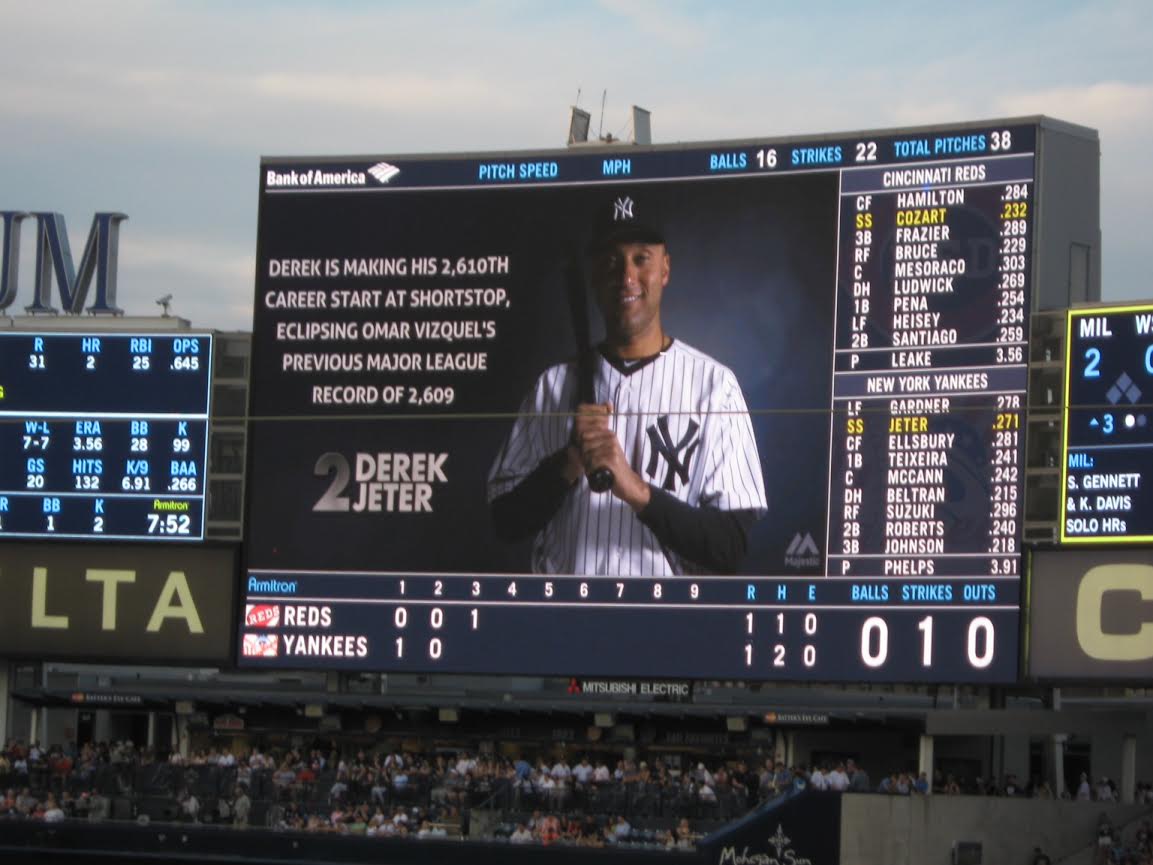 The fans really do care about their team. It was fun seeing fans have a good time and supporting their team. It helps when they are winning. I was surprised to see how many stuck around to listen to Frank SinatraÃ¢â‚¬â„¢s Ã¢â‚¬Å“New York, New YorkÃ¢â‚¬Â play several times over after the Yanks sealed the 4-3 victory. My wife and I waited several minutes to get our picture taken on the railing with the field as our backdrop along with loads of other fans. The fans we were surrounded by through the game gave their condolences for the loss and even offered up some Ã¢â‚¬Å“better luck next timesÃ¢â‚¬Â. Despite Yankee Stadium not really being a fun, fan-friendly stadium the Yankee fans were, well, friendly and fun. 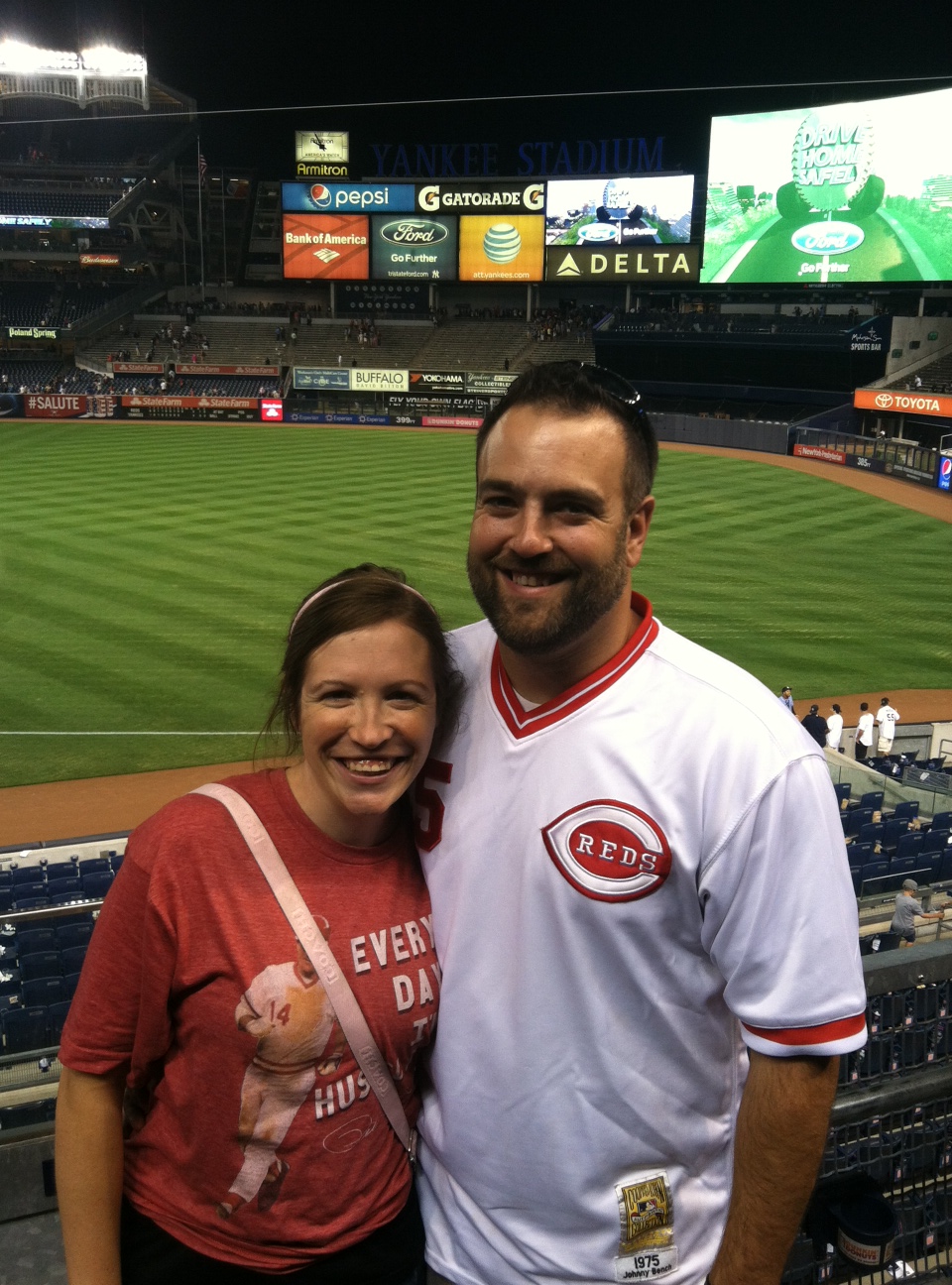