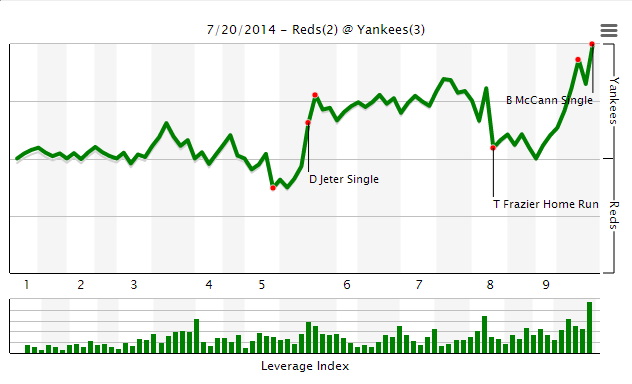 The Reds got swept by the Yankees, in glorious TOOTBLANÃ‚Â fashion. With a runner on third base and 1 out in the 9th inning of a tie game, Aroldis Chapman was able to get Brian McCann to pop-up, in pretty routine fashion. The ball was in the middle of Schumaker, Frazier, and Bruce, and all three players let up. The ball dropped as the three guys stared at each other, and that gave the Yankees the win. I’ll let you guys fight over who was most to blame for that. It was just a play that simply can’t happen.

According to FangraphsÃ‚Â WPA statisticÃ‚Â (wining percentage added), the most important play of the game wasÃ‚Â Todd Frazier’s solo home run in the 8thÃ‚Â inning. Despite the Reds eventually losing the game, it was the biggest play of the game for either team. The play increased the Reds chances of winning by 26.0% (from 19.3% to 45.4%)

Other important playsÃ‚Â (+/- is the percentage each play increased or decreased the Reds chances of winning):

Todd FrazierÃ‚Â hit a huge, game tying homer in the 8th inning. The home run gave Frazier a new career high 20 HR, and he now needs just 7 more HR to have the most homers by a Reds 3B since Tony Perez hit 40 in 1970. He also made a terrific play at 1B in the first inning. He made a diving stop of a rocket from Mark TeixeiraÃ‚Â that would have gone down the line. WithÃ‚Â Jacoby Ellsbury on first base, he probably saved a run. 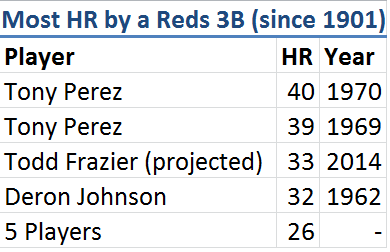 Ramon Santiago extended his hitting streak to 8 games today. Santiago went 2 for 2 today with a double and a single. He now has a ridiculous .361 OBP on the season (that is higher than every Red except for Votto and Mesoraco). Santiago has really been a nice utilityÃ‚Â player for the Reds. He has played solid defense (he had 2 Defensive Runs Saved entering today), although he did commit an error at third base today.

Sam LeCureÃ‚Â entered the game in the 6th inning with the bases loaded, and 2 outs. LeCure got Derek Jeter to ground out, and kept the Yankees lead at 2-1.Ã‚Â LeCure would go on to pitch a scoreless 7th inning as well..

.@mrLeCure in his career has inherited bases loaded 18 times and stranded 52 of the 54 inherited runners.

Zack CozartÃ‚Â makes it look so easy at SS. He made some nice plays in the field today. There is a reason he entered today with 17 Defensive Runs Saved (4th most of ANY player at ANY position in the MLB, and most among all MLB SS).

Jonathan Broxton pitched a scoreless 8th inning, allowing 1 hit, and striking out 1. Broxton now has a 1.06 ERA and 0.79 WHIP on the season.

TheÃ‚Â Reds DefenseÃ‚Â was brutalÃ‚Â today. There was the 9th inning debacle that I don’t want to talk about anymore. Ramon Santiago made an error in the 6th inning that loaded the bases for the Yankees, and Billy Hamilton lost a fly ball, courtesy of the sun. Fortunately for the Reds, Sam LeCure was able to pitch around those defensive miscues, and the Yankees didn’t score either time.

The Reds Offense was brutal in this series. They scored just 6 runs in this three game series, and struck out 31 times. It is pretty apparent the Reds have to get a serious bat somewhere if they want to contend this year. It was nice to see replacement players carry the Reds to the all star break, but bad players can only play above themselves for so long.

Jacoby Ellsbury showed why defense matters in baseball. He made an incredible running, sliding catch to rob Frazier of a hit in the third inning. His catch ended the inning, and saved at least 1 run from scoring (Reds had runners on 1st and 2nd).

The Yankees hitters might be old as dirt, but they really worked JohnnyÃ‚Â Cueto, and jacked up his pitch count. Cueto threw 112 pitches in just five innings. Cueto certainly wasn’t given a generous strike zone by Angel Hernandez. However, from following along on MLB Gamecast, it didn’t appear like Cueto was really squeezed too much by Hernandez.

Skip Schumaker got picked off (technically consider caught stealing) after a leadoff single in the 8th inning. He was the tying run. I’m assuming the play was a hit and run that Schumaker took off a little too early on. Of course, Todd Frazier would hit a homer later in the AB, and if Schumaker didn’t get picked off the Reds would have had a 3-2 lead. It turned out to be a pretty big deal.

Not so randoms thoughts……..

The Brewers also lost in walk-off fashion at Washington. The Reds will start a 3-game series in Milwaukee tomorrow with a chance to pass the Brewers in the standings with a sweep. The Cardinals play the Dodgers tonight on ESPN. If the Cardinals win, they will be in sole possession of first place in the NL Central, with the Reds 3.5 games back. The Pirates also won today, so the Reds are now in 4th place in the NL Central, a game behind the Pirates.

Why didn’t Bryan Price play Mesoraco at DH today? You have a chance to keep a player with a .957 OPS in the lineup, while still giving him a day off behind the plate. I’m sure the explanation for this would be that Price wouldn’t want to the lost the DH if Pena was to get hurt, but I feel like that is certainly a risk worth taking. The Reds certainly could have use his bat in the lineup.

I don’t like Price batting Skip Schumaker and Zack Cozart second, and I’m really not sure why he is doing it. Frazier has hit second 37 times this season, so why remove him with Votto gone? Just go with Hamilton, Frazier, Bruce, and Mesoraco 1-4, and give your best hitters the most trips to the plate. And yes, I know Skippy had an RBI double, and a 2 for 3 day. The end doesn’t always justify the means.

Now that I am done criticizing Price, I will praise him. He pitched Aroldis Chapman in the 9th inning, in a tie game, on the road. You have to give Price some credit for that, as that is something our old friend Dusty Baker never would have done. Even if it didn’t work, it was still the right decision. At least Price went down with his best bullpen arm on the mound.

I was watching the game today on the YES Network (Yankees broadcast). Former Red, PaulÃ‚Â O’Neill was doing color commentary today. In the second inning, Carlos Beltran struck out, but he really battled and made Cueto work (as you see below courtesy of MLB Gamecast). O’Neill praised Beltran for having a good at-bat, and said he just got beat by a great pitcher making a great pitch. It was really nice to see a broadcaster praise the process, and not just bash the results as we see so many times by a few Cincinnati broadcasters. 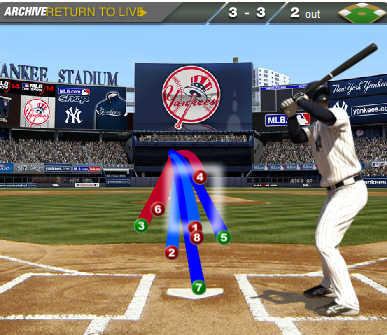