[Jason Linden is on vacation, so I’m pinch-hitting for him in his Wednesday column about the Reds’ offense.]

Let’s take a look at the Reds offense at the All-Star break in 2014 compared to 2013. Table 1 compares the two teams on basic offensive numbers.

The bottom line of Runs scored shows nearly a 10 percent decline from last season. The Reds have fallen from fourth in the NL to eighth. Batting average has remained about the same. But the Reds’ on-base-percentage is much lower than it was in 2014. That’s primarily due to Joey Votto’s injury suppressing his number of plate appearances and the loss of Shin-Soo Choo. Somewhat surprisingly, the Reds slugging percentage is down. More on that in a second. The final two advanced metrics – OPS+ and wRC+ – are measures against the rest of the league with 100 being average. The Reds have fallen from fifth in the league in wRC+ to eleventh.

Table 2 shows how the Reds have done in terms of power.

The Reds have hit fewer home runs in 2014 and their overall power is down whether measured by slugging percentage or isolated power. The Reds are finding power from different sources this year, mainly from Devin Mesoraco (ISO .304) and Todd Frazier (ISO .210). Last year, Joey Votto (ISO .188), Jay Bruce (ISO .230) and Shin-Soo Choo (ISO .181) led the team in power at the half-way point. One interesting comparison is that Todd Frazier’s power in 2013 was roughly comparable to Joey Votto’s power this year.

Table 3 shows how the Reds have done in terms of speed.

The Reds have dramatically increased their stolen base total this year. That’s about half due to Billy Hamilton and half due to the rest of the team, like Todd Frazier, Jay Bruce and Chris Heisey. The Reds have also become more proficient at stealing. Last year, the Reds got caught in an absurdlyÃ‚Â high percentage of their SB attempts, particularly Shin-Soo Choo. Research has shown that a success rate of 70 percent is necessary to make the SB attempt worthwhile. The Reds came nowhere near that in 2013. Their success rate is 71.7 percent this year.

The statistic wSBÃ‚Â (weighted stolen base contribution) measures the net effect of stolen bases on runs created. You can see the net effect is really small. One surprising result is that Billy Hamilton’s SB value is just about the same as Chris Heisey’s because Heisey has been successful in all 7 of his attempts, whereas Hamilton has 15 CS to go with 38 SB. UBR (ultimate base running) measures all the non-SB aspects of running the bases, including advances, taking extra bases, tagging up and times getting thrown out. Each individual play is weighted. The Reds have gone from a mildly positive team, fifth in the NL, in base running to a highly negative team, fourteenth in the NL.

What’s most striking about the speed measures is how little they effect overall run production for a team. Keep in mind that last season, the Cardinals had far and away the most runs scored in the NL, yet they were last in stolen bases.

The Reds have increased their strikeout percentage, but so has the entire league. Despite striking out at a slightly higher rate this year, the Reds are actually better (sixth) with respect to the rest of the league than they were last year (ninth) at this time. Unfortunately, the Reds walk-rate has fallen dramatically from last year to this. Again, this is primarily due to Votto’s influence being limited by the number of at bats and the loss of Shin-Soo Choo and Ryan Hanigan. The Reds plate discipline, as measured by O-Swing% – swinging at pitches outside of the strike zone – has also declined, in large part due to the same factors. Choo swung at an extraordinarily low number of balls, almost as few as Votto.

The Reds have experienced a gigantic turnover in where they get their offense compared to last year. This is due to three factors: Injuries to key hitters like Votto and Bruce, the sudden emergence of Frazier and Mesoraco, and the change in the lead-off spot from Choo to Hamilton. Table 5 showsÃ‚Â comparisons in OPS+ (on a 100-point scale, with 100 being average): 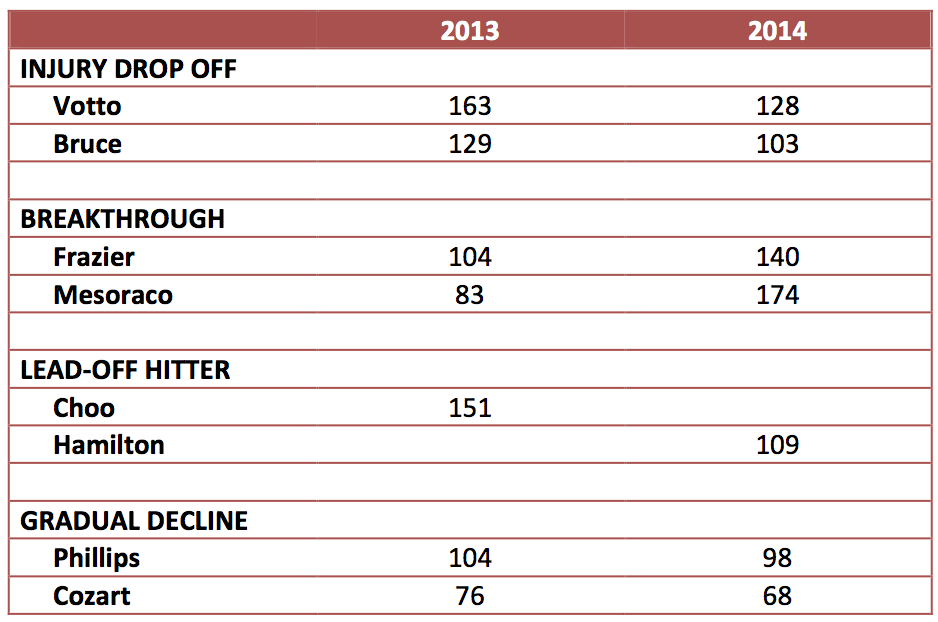 Keep in mind these numbers reflect the 2013 output of the player through the All-Star game, not the full season. As rate statistics (as opposed to counting, like home runs and hits) they also don’t reflect the number of at bats. For example, Mesoraco’s increase in offense is mitigated by missing playing time due to injury and Brayan PeÃƒÂ±a.

With serious injuries to Joey Votto and Brandon Phillips causing far inferior back-up players to take their places for weeks or months, and the inevitable return of Devin Mesoraco to hitting like a mere mortal, it’s hard to imagine the Reds will be able to reverse that trend with the current roster. If anything, you’d expect further decline in their standing in comparison to the rest of the league.