The Reds had another huge comeback. They came back from a 4-0 deficit to take a 5-4 lead, thanks to a 5-run, 6th inning. It would prove not to be enough though. Last year’s NL MVP, Andrew McCutchen hit two homers late in the game to give the Pirates a 6-5 win in 11 innings. It doesn’t take away from what has been an incredible week from the Reds, who are still only 1.5 games back in the NL Central (Cardinals and Brewers are now tied for 1st). You still have to give this team a lot of credit for the resiliency they continue to play with, especially with the huge injuries that have occurred.

According to FangraphsÃ‚Â WPA statisticÃ‚Â (wining percentage added), the most important play of the game wasÃ‚Â Andrew McCutchen’s solo HR in the 11th inning, giving the Pirates a 6-5 lead. That HR decreased the Reds chances of winning by 42.5% (from 59.3% to 16.9%).

Other important plays (+/- is the percentage each play increased or decreased the Reds chances of winning):

McCutchen. Man, that guy is good. 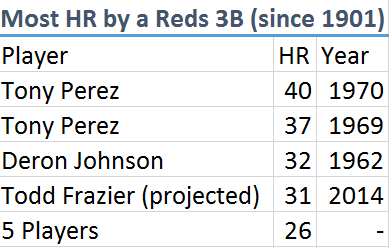 Chris Heisey hit a pinch hit, 2-run HR to cut the Pirates lead to 4-2 in the 6th inning. That got the ball rolling on another big Reds comeback. This just once again shows why Skip Schumaker should NEVER start over Heisey.

Billy Hamilton stole a base in the 6th inning. It was on a pitch out too. Amazing.

Jumbo Diaz came in with 2-outs, and runners on 1st and 3rd in the 8th inning (Reds were up 5-4). Diaz got Ike Davis to ground out to end the inning. That increased the Reds chances of winning by 11.8%. It was great to see Jumbo get the job done in a very high leverage situation.

Logan OndrusekÃ‚Â pitched a perfect 7th inning, striking out two. Ondrusek hasn’t allowed a run in 13 of his last 15 appearances.

Reds third-base coach Steve SmithÃ‚Â made a horrendous decision in the 10th inning with 0 outs. He decided to send Ramon Santiago home on a hard hit single by Jay Bruce. Santiago was out at the plate on a great throw by Gregory Polanco. Devin Mesoarco (and his .964 OPS) would have come to the plate with the bases loaded, and no outs, in a tie game. It was just an inexcusable decision by Smith. You have to be 110% sure the runner will score if you send him there.

Mike Leake had a really tough luck night. 7 of the 9 hits he allowed were on ground balls (several not hit very hard). Leake certainly didn’t help himself by walking three batters, and hitting one. He did however leave a lot of base runners stranded, and kept the ball in the park. Leake’s line on the evening: 6.0 IP, 9 H, 4 ER, 3 BB, 2 K, -0.21 WPA, 4.46 FIP.

Jonathan Broxton, who was filling in for the overworked Aroldis Chapman, gave up a game tying homer to last year’s NL MVP Andrew McCutchen. It’s hard to be mad at a guy who’s ERA jumped all the way up 1.13.

J.J. Hoover pitched a perfect 10th inning, striking out two, and was on his way to a perfect 11th inning. But then Hoover gave up a 2-out, go ahead HR to last year’s NL MVP Andrew McCutchen. It was a mistake slider to McCuthen right down the middle of the plate that you just can’t make. You just can’t give a hitter as good as McCutchen that good of a pitch to hit in that situation. If you have to walk him….walk him.

One thing that I absolute love about Bryan Price is that guys like Todd Frazier and Zack Cozart have become stolen base threats. Frazier stole his 14th base in his 93rd game of 2014 (he had 10 career SB in 319 games prior to this season). Cozart stole his 3rd base of the season (he didn’t steal a single base in 2013).

Thom Brennaman and Cliff Floyd were absolutely brutal to listen to. Their conversations and “analysis” in this game put baseball back about 97 years. In the third inning,Ã‚Â Thom and Cliff raved and raved about Walker moving McCutchen over to third base with 0 outs on a ground out to the right side. That play actually decreased the Pirates chances of winning by 0.9%. Later in the game, our boy Thom said “Jumbo comes up huge” after Jumbo Diaz got out of a jam in the 8th. 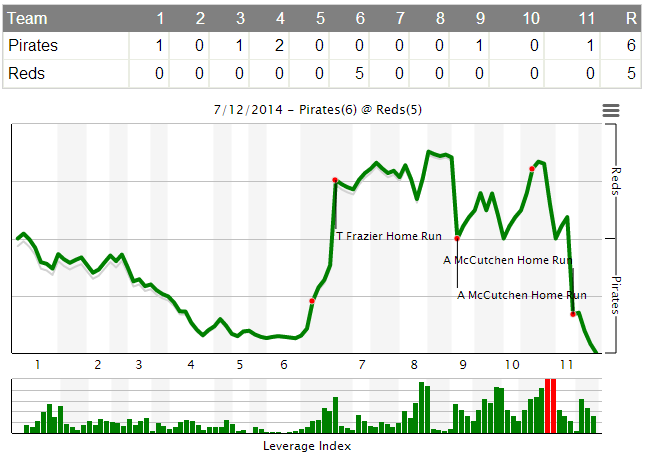 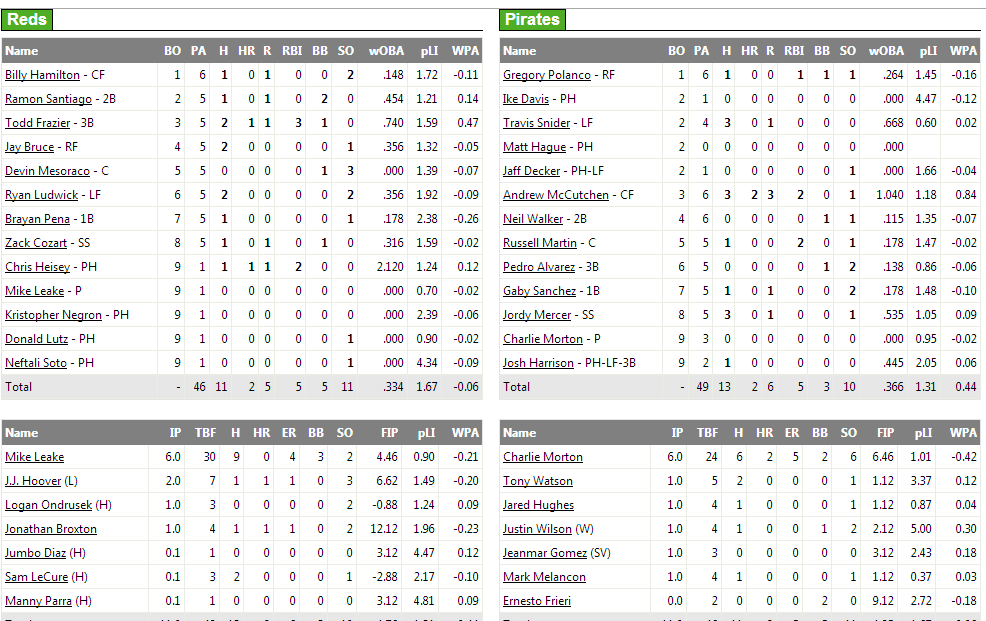