Homer Bailey Ã‚Â Bailey left the game yesterday in the sixth inning with a sore right knee. He was diagnosed with a strained patella tendon.

The patella tendon connects the quad muscle to the knee (patella). Announcer and former-pitcher Jeff Brantley pointed out the right leg is Bailey’s “push-off leg.”

As bad as that video looks, the Reds are saying that Bailey has a slightly sprained knee. They did conduct a precautionary MRI (hooray) and predict that Bailey won’t miss a start. The timing of the All-Star break helps.

“We can put him toward the back end coming out of the All-Star Break,” said manager Byran Price. “It sounds like he should be good to go by then.”

Homer Bailey is 28 years old. He missed time inÃ‚Â spring trainingÃ‚Â with a groin injury and had a series of shoulder problems from 2010-11. He has remained healthy since, throwing 208 and 209 innings during the past two seasons.

ConcernÃ‚Â Level: Moderate. So far, so good. But I have to admit the severity of the pain that would cause Bailey to leave the game so suddenly doesn’t quite square up with the “nothing to see here” diagnosis. Plenty of danger, both medium and long-term, lurking with patella tendon injuries. Stay tuned.

Billy Hamilton Ã‚Â Hamilton left the game Wednesday night with a tight left hamstring and did not start on Thursday. He did pinch hit in yesterday’s loss. It wasn’t a sudden, single event that caused him to leave the game.

“It’s been bothering me for the past couple of days,” Hamilton said. “I knew something was happening. On the last at-bat, I stepped down and I felt it pull when I started running.”

Hamilton is listed as day-to-day, someÃ‚Â reportsÃ‚Â speculate he might miss a few games. Others cite Price as indicating Hamilton will start against Pittsburgh tonight. Sounds promising that he’ll be back in time for this: 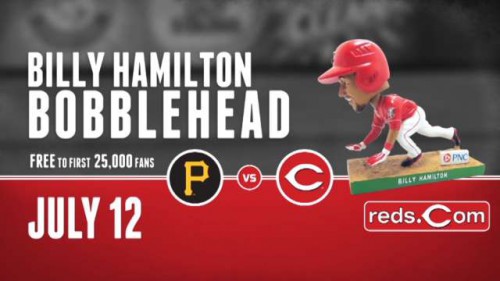 Billy Hamilton is 23 years old. He missed time earlier this year with sprained knuckles (May 1) and a jammed finger (April 5) although neither injury was serious enough for him to go on the DL.

UPDATE: Billy Hamilton is in the Reds’ lineup tonight:

ConcernÃ‚Â Level: Low. Price using Hamilton in yesterday’s game is a good indication they don’t consider this too serious. The ongoing risk is aggravating the hamstring. Bursts of speed are a fundamental part of Hamilton’s game.

Brandon Phillips Ã‚Â Phillips was injured diving for a ground ball in Wednesday night’s game. Yesterday, the Reds announced he had torn a ligament in his left thumb and would undergo surgery to repair it today. They estimated he would miss about six weeks.

Torn ulnar collateral ligaments in the thumb are caused by the thumb being bent back too far. 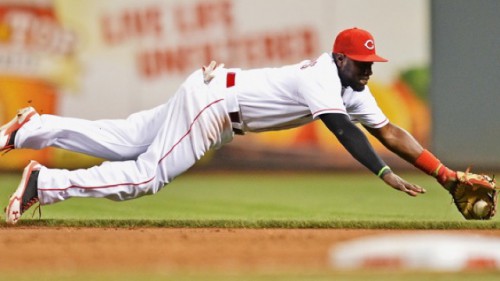 Brandon Phillips is 33 years old. He has been durable, with this being his first trip to the disabled list since breaking a finger in 2008. He has played at least 140 games every year since 2006.

Six weeks is an optimistic estimate. Washington Nationals outfielder, Bryce Harper, missed nine weeks with a similar injury earlier this year. Josh Hamilton was out from April 8 to June 2 (8 weeks) with that injury this year. Yadier Molina suffered a torn thumb ligament (while sliding feet first, of all things) on Wednesday night and the Cardinals are estimating their catcher’s return at 8-12 weeks.

Eight weeks from today is September 5.

Concern Level: High. The Reds will be without their starting 2B for two months. The team not only has to cope with the drop off in the field and the lineup, it further weakens their bench.