The Reds are 7-3 so far in 2014 against the Pirates. Ã‚Â Here are the numbers in the season series: 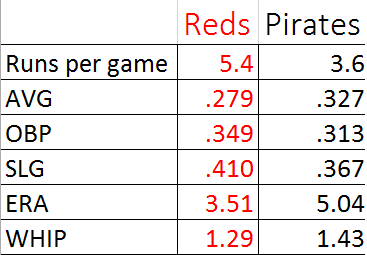 The Pirates have a very solid offense. Ã‚Â If you look at their projected lineup, they have seven above average players using wRC+. Ã‚Â The Pirates hitters 1-5 in the lineup all have wRC+ of 120 or better. 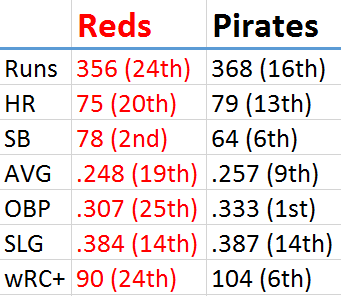 Starling Marte is on bereavement leave. Ã‚Â He is not expected to play in this series.

Both pitchers in this matchup have limited starts in 2014. Ã‚Â Mat Latos has been very good in his five starts since returning from the DL, although his fastball velocity and strikeouts are significantly down. Ã‚Â Jeff Locke started the season in the minors, and he really wasn’t good at AAA (9 GS, 4.14 ERA, 1.46 WHIP). Ã‚Â Locke was called up on May 5th, and in his only start got shelled (5.1 IP, 8 H, 6 ER). Ã‚Â Locke was sent back down to the minors, and returned to the majors on June 8th. Ã‚Â Since his return to the Pirates, Locke has been absolutely tremendous: 6 GS, 2.23 ERA, 0.86 WHIP.

This will be a rematch of the 2013 Wild-Card game. Ã‚Â Liriano has been up and down with injuries this season, and hasn’t pitched since June 10th. Ã‚Â Johnny Cueto will look to head into the All-Star break with a sub-2 ERA, something that hasn’t been done by a Reds starter since Gary Nolan (1.82 ERA) in 1972.

The Pirates have a really solid back-end of their bullpen, with All-Star Tony Watson, Jared Hughes, and Mark Melancon. Ã‚Â The rest of their bullpen is a little less than stellar. 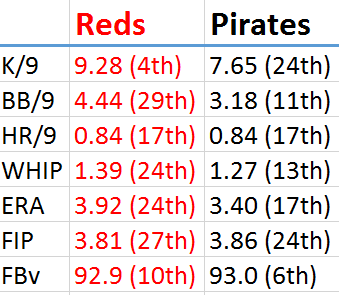 The Pirates have great speed in the outfield, but this isn’t a great defensive team. Ã‚Â An interesting stat to see is that Andrew McCutchen has -7 DRS and -20.4 UZR/150. 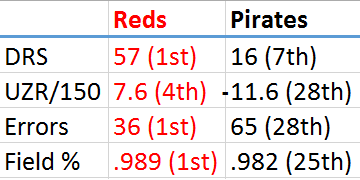 The Reds are banged up. Ã‚Â The loss of Brandon Phillips will force the Reds to play another replacement level player everyday. Ã‚Â The Reds will need rely heavily upon their pitching in this series, and hope they can continue their dominance of the good Pirates lineup. Ã‚Â The Reds are just 2.5 games back in the division, and if they can just make it to the All-Star break realatively close to first place, maybe Walt Jocketty can make a move to get the Reds offense some much needed help. Ã‚Â This is a big series for the Redlegs.