Entering tonight, the Reds largest comeback of 2014 was 2 runs. Ã‚Â The Reds blew that out of the water as they came back from a 5-0 deficit to win 6-5 on a Billy Hamilton, broken-bat, walk-off single. Ã‚Â The Reds are six games over .500 for the first time in 2014. Ã‚Â The Reds are now incredibly just 3.5 games out of first place in the NL Central.

According to FangraphsÃ‚Â WPA statisticÃ‚Â (wining percentage added), the most important play of the game wasÃ‚Â Jay Bruce’s RBI double in the 8th inning, which tied the game at 5. Ã‚Â That play increased the Reds chances of winning by 36.2% (37.5% to 73.7%).

Billy the kidÃ‚Â had another great night. Ã‚Â He had the walk-off, broken-bat RBI single in the 9th. Ã‚Â He also had a RBI triple in the 7th inning, that cut the deficit to 5-4, where he missed a tying homer by just a few feet. Ã‚Â Billy also had a walk, and had a nice running catch in the game.

The Cubs bullpen.Ã‚Â God bless them.

Carlos ContrerasÃ‚Â pitched very nicely in relief for the Reds. Ã‚Â Contreras pitched 2.1 innings of scoreless baseball after Holmberg was pulled in the third inning. Ã‚Â That helped save a bit of the Reds bullpen, and gave the Reds a chance to comeback in this one.

In the first inning, Chris Couhlan hit a homer into the first row in RF. Ã‚Â Skip Schumaker at 5’10 just missed the catch. Ã‚Â It would be silly to definitively say Bruce (6’3) or Heisey (6’1) would have made the catch, but we have certainly seen both take away some HR in the past.

In the secondÃ‚Â inning, Ryan Ludwick misplayed a ball in LF that resulted in Darwin Barney stretching a single into a double. Ã‚Â The play didn’t go as an error, but it was a play that you would almost certainly believe that Heisey would have made.

In the third inning,Ã‚Â Jay Bruce had some indecision on a ground ball, and that allowed Darwin Barney to reach on a single. Ã‚Â It was a pretty generous no-error decision by the home scorekeeper, but a play that should have been made. Ã‚Â If that out would have been recorded, it would have brought up the pitcher with two outs. Ã‚Â As a result of the misplay, Holmberg exited after the pitcher sacrificed. Ã‚Â He was set to lead-off the next inning, so it cost the Reds a chance to use a PH, andÃ‚Â Contreras had to hit to stay in the game.

I know starting a guy with a 5.28 ERA in AAA is never any fun, but I really don’t think the Reds had a better option here. Ã‚Â If they would have called up Chien-Ming Wang (3.57 ERA, 1.47 WHIP at AAA), he would likely get picked up by another team because he is not protected on the 40-man roster. Ã‚Â Holmberg is on the 40-man roster, so he can be sent back down following the game and still be protected. Ã‚Â The other real alternative would be to just start Simon (who is scheduled to pitch tomorrow), but he would have to pitch on 3-days rest, and then everyone else in the rotation would have to pitch on 3-days rest for the rest of the week.

It was announced tonight that Todd Frazier will be participating in the Home Run Derby on Monday night. Ã‚Â While I’m sure there is some merit to saying it could mess up his swing, I think this is a really cool thing for the Reds. Ã‚Â I’ll certainly be glued to the TV Monday night to see the always entertaining ToddFather. 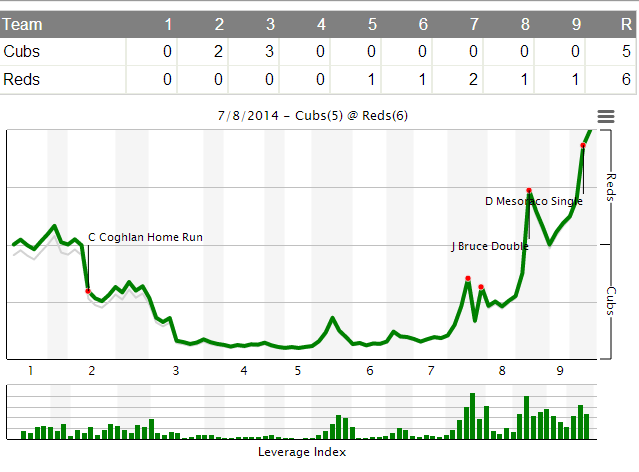