The Reds took a conservative gamble on Billy Hamilton for the 2014 season. Expecting a rookie to fill both the leadoff position and play centerfield on a contending team is a lot.

As the Nation knows, Hamilton got off to a horrible start at the plate. Reds Manager Bryan Price showed a lot of patience and it’s paying off. My expectations for Hamilton before the season were guarded. I was hoping for at best, a .265 batting average, an on-base percentage of .300, 65-70 stolen bases and a successful stolen base percentage rate of 80%.Ã‚Â  Any power he showed, to me, would be a bonus. And I expected him to get better in centerfield as the season progressed.

So what have we seen from Billy Hamilton? 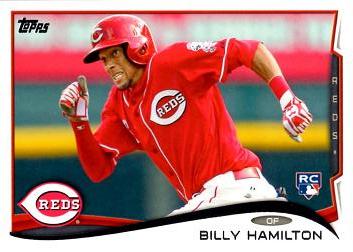 Great defense. A batting average that has climbed to .275 and his OBP is .305 (as of Sunday morning, 5 July) but he’s getting thrown out/picked off at a higher rate than I anticipated (35 stolen bases, 12 caught, a percentage of 74%).

And now it looks like Hamilton has a decent shot at being named N.L. Rookie of the Year.

If Hamilton wins the award, he would be the first this century to do it in a Cincinnati uniform and the first since Williamson. Adam Dunn finished fourth in 2001, Austin Kearns was third in 2002 and Todd Frazier was third as well in 2012.

This article will feature three of the closest races in the voting, which included Bench, Zachry and Votto.

Of the 128 players who have been awarded the Rookie of the Year, 14 of them went on to be elected to the Hall of Fame. And Johnny Bench is one of them. 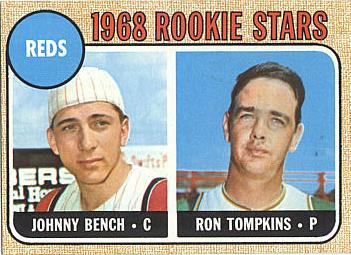 As the Nation is keenly aware, Johnny Bench is considered the best catcher in the history of baseball. Yet his Rookie of the Year winning margin over New York Mets lefty Jerry Koosman was by a thin margin— 52% to 48%.

Bench’s statistics in 1968 were modest, by his standards; 15 home runs, 82 RBI’s, a .275 batting average and an OBP of .311 paled when compared to his MVP numbers of 1970 and 1972. But Bench’s defensive abilities and cannon of an arm were on display for all to watch even as a rookie. The joke was that Bench and Pittsburgh rightfielder Roberto Clemente had the best arms on their respective teams, including the pitching staffs. In ’68, Bench gunned down 47.3% of base runners attempting to steal.

BenchÃ‚Â set a few career highs his rookie year — innings caught (1301), passed balls (18) doubles (40) and assists (102.) He played 154 games that year, starting 139 and played catcher exclusively. (Note: Sparky Anderson would Ã¢â‚¬Å“restÃ¢â‚¬Â Bench by starting him in right field or first base at times. He even played centerfield twice during the 1970 season. But in 1968, then-manager Dave Bristol didn’t move Bench around very often, if at all.)

Jerry Koosman was coming on the heels of Tom Seaver’s Rookie of the Year win in 1967. The Mets were building the foundation of a pitching staff that would anchor their team for the next eight years and yield them two NL pennants and one World Series championship.

Bench prevailed in the voting — barely. Playing in New York City may have helped Koosman but the bottom line may have been Bench’s solid all around play that got him the victory in the end.Ã‚Â Both went on to have great baseball career’s. Koosman retired after the 1985 season, two years after JB called it quits.

In 1975, Sparky Anderson had the Gold Dust Twins out of the bullpen — rookies Rawly Eastwick and Will McEnaney. In 1976, he had two other rookie pitchers — Pat Zachry and Santo Alcala. 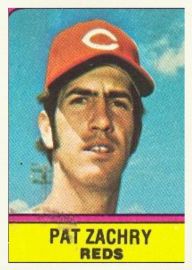 Zachry was the better of the two. He had a solid rookie season, finishing with a 14-7 record,Ã‚Â  a 2.74 ERA and a Game 3 World Series win over the New York Yankees. Tall and gangly, the 6-foot-5 Zachry was more finesse than power. And it looked like he would be in a Reds uniform for a long time.

Zachry finished in a dead heat with Padres rookie relief pitcher Butch Metzger. A right-hander, Metzger was 11-4 for the Padres and saved 16 games with an ERA of 2.92. Despite playing for the Big Red Machine, Zachry didn’t get enough votes to win the ROY award outright.

Metzger started getting hit hard when the 1977 season started. His ERA ballooned to 5.56 after making just 17 appearances for San Diego and they traded him in May 1977 to St. Louis. By 1979, Metzger was out of baseball.

Zachry met the same fate, albeit a few years later. He struggled early in 1977 for the Reds (3-7, 5.04 ERA) and was a key player in a blockbuster trade that brought Tom Seaver to the Reds. Zachry, Dan Norman, Doug Flynn and Steve Henderson were traded to the Mets for Seaver. Zachry never again won 14 games, as he did as a rookie. He was 10-6 in 1978 but the Mets traded him to the Dodgers in 1982 and he ended up being released by the Phillies in 1985.

As for Santo Alcala? He finished 11-4 for the Reds in 1976 but exceeded the rookie limits and was ineligible for the vote. Even in ’76, his record was misleading. He walked as many batters as he struck out (67) in 132 innings and he posted an ERA of 4.70.. Alcala allowed nearly a hit per inning and he quickly fell out of favor with Anderson. He was traded to the Expos in 1977 for the proverbial player to be named later and was out of baseball by 1979. 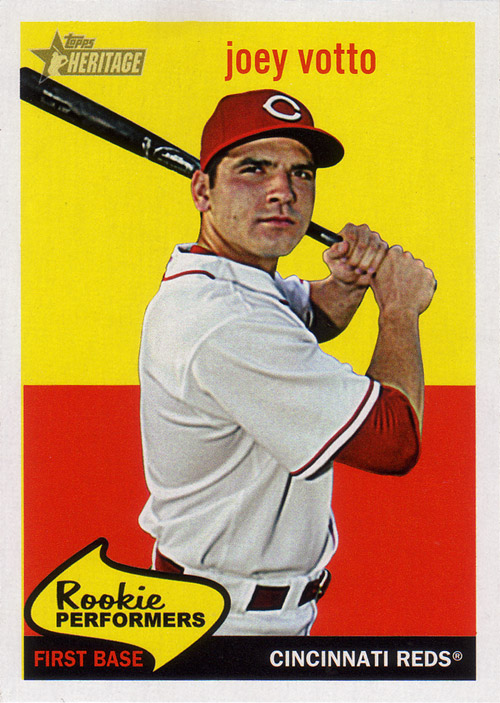 The Chicago Cubs were the hot item in 2008. These lovable losers were filling ancient Wrigley Field and had a winning team, which would eventually lose in the playoffs (again). In the middle, was a rookie catcher named Geovany Soto. And in Cincinnati, then rebuilding, still losing, still pitching-starved, was a rookie first baseman named Joey Votto.

Soto started off hot. Cubs fans stuffed the ballot box and he started in the All-Star Game. But Votto finished the season stronger as Soto came back to earth. In the end, their statistics were remarkably similar.

Soto had the edge for two reasons; he was a catcher and the Cubs made the playoffs.