[Edit.: Brian Van Hook took in the first game of the Padres series – the game the Reds lost despite surrendering only one hit. He filed this report from behind enemy baselines. Thanks, Brian! — spm]

I grew up in Clermont County, about a half-hour east of Cincinnati, seemingly about a million years ago, and went to St. Xavier High and Ohio University. Ohio U. always seemed to be more of Ã¢â‚¬Å“IndiansÃ¢â‚¬Â territory, even though we were just a few years removed from the Big Red Machine. And I was happy that the college town, Athens, Ohio, had a Reds radio affiliate. It was good to hear Marty and Joe to ease a bit of the homesickness that I didnÃ¢â‚¬â„¢t want to admit I was feeling! Ã¢â‚¬Â¦ True story: A couple of die-hard Indians fans were so desperate to hear Tribe games that they occasionally took a radio to the top-floor bathroom window of their dorm because it was the only place to pick up the IndiansÃ¢â‚¬â„¢ radio broadcast consistently. 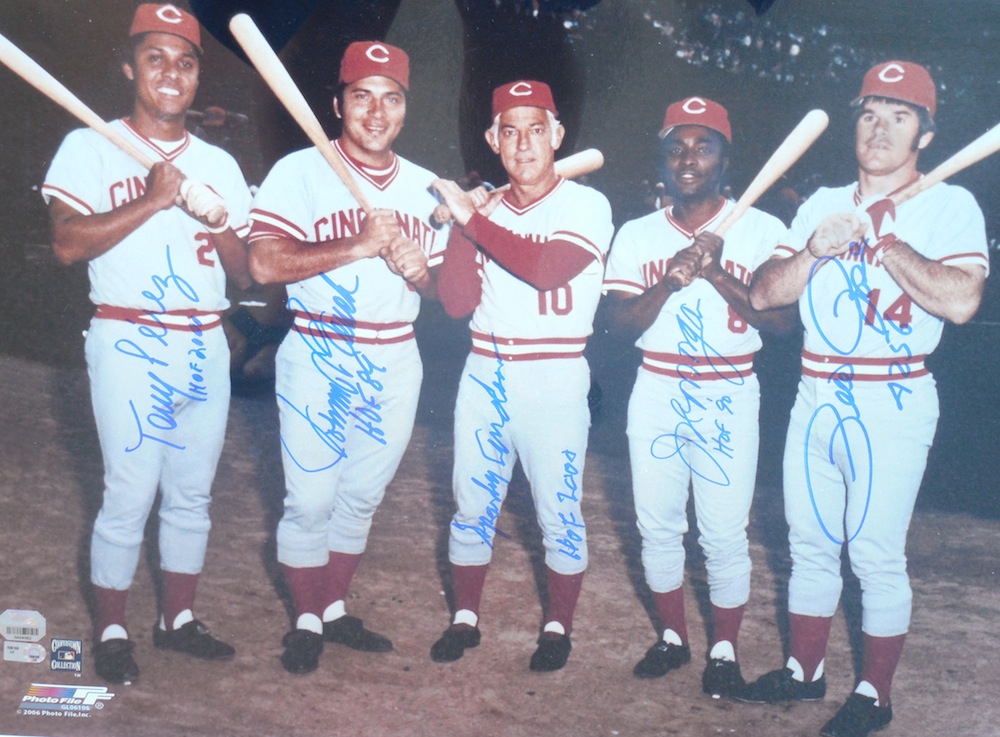 IÃ¢â‚¬â„¢ve visited Cincinnati a handful of times since college, but never lived there again. My newspaper career has taken me mostly to Southern California and Las Vegas (hence the Ã¢â‚¬ËœvegasÃ¢â‚¬â„¢ part of my Ã¢â‚¬ËœvegastypoÃ¢â‚¬â„¢ screen name. Typo was my beloved dog, and he was destined to have a journalism-related name!) Ã¢â‚¬Â¦ It was a culture shock, to say the least, to be out of earshot of the Reds, so I must say that MLBÃ¢â‚¬â„¢s online audio subscription is a bargain for a seasonÃ¢â‚¬â„¢s worth of games. And when a friend of mine mentioned Redleg Nation, I was really, really happy to have a place to read about the Reds and cheer. To all the editors and commenters here, I salute you!!

IÃ¢â‚¬â„¢ve always preferred to go to San Diego to see the Reds rather than L.A. After all, the Padres played for years and years at San Diego Jack Murphy Stadium, named for a sports writer!!! Ã¢â‚¬Â¦ The freeway traffic in L.A. is as bad as youÃ¢â‚¬â„¢ve heard and even worse at rush hour. I actually braved the traffic last season (OK, it was a Sunday) to see the Reds in L.A. when work prevented me from going to San Diego. Tony Cingrani pitched his tail off, but the Reds couldnÃ¢â‚¬â„¢t score a run for him, so the Reds lost on an otherwise dandy afternoon when Yasiel Puig hit a late homer. And my daughter got to run the bases after the game!!!

In San Diego, we have seen Cueto (2012) and Volquez (2011) pitch the Reds to wins, and the pitcher that the Reds victimized in that 2011 game was Mat Latos. After this past Monday night, Mat might not want me at any more of his games!!!

San Diego is a cool place to watch baseball. To say that employees at the stadium are extremely friendly and accommodating is an understatement. And I never get the feeling that it is Ã¢â‚¬Å“forcedÃ¢â‚¬Â politeness. One of my reasons for preferring San Diego is that the fans are pretty laid back. I was actually a little concerned about going to L.A. last season with my daughter, just because Dodger Stadium does have a reputation for rowdiness, even before the assault that happened several Opening Days ago. But we were fortunate in L.A. to have some good fans sitting nearby, and that always seems to be the case in San Diego. 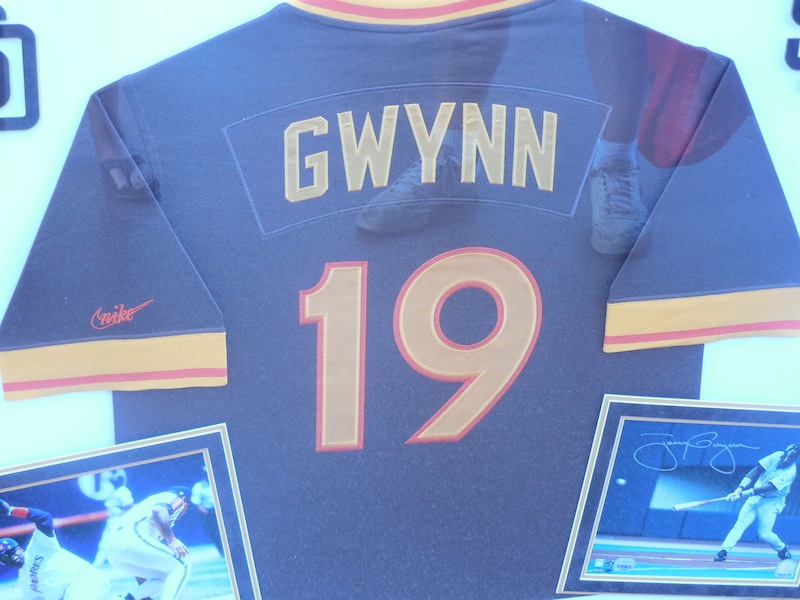 IÃ¢â‚¬â„¢m generally not big on cityscapes, but I think it works well enough in San Diego. ItÃ¢â‚¬â„¢s also rather odd to see airplanes that are landing nearby cut between buildings. And youÃ¢â‚¬â„¢ve probably seen the Western Metal Supply Co. building faÃƒÂ§ade down the left-field line at Petco Park. Because the buildingÃ¢â‚¬â„¢s exterior was designated a landmark, the stadium developers ended up making it part of the stadium. There are a few museum style exhibits inside the hollowed out Western Metal building that show the history of the team/stadium.

It was a bit sad to reflect on Tony Gwynn, who died a few weeks ago. A statue has graced Tony Gwynn plaza since 2007. And I thought it was a nice touch that one of the buildings in downtown San Diego lit up GwynnÃ¢â‚¬â„¢s No. 19 throughout the evening, visible beyond center field. Maybe the Padres have been getting a little extra help in this series? 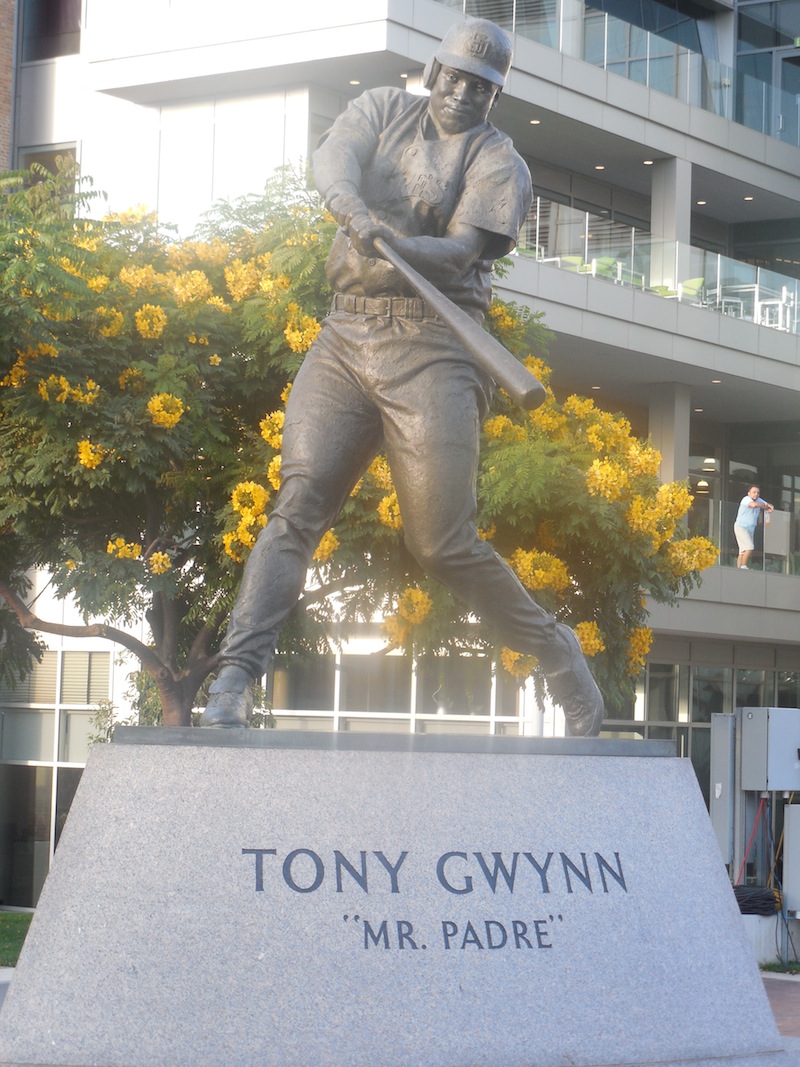 If you make it to San Diego, hit the Gaslamp Quarter up the street from the stadium for nice places to eat, drink and socialize. WeÃ¢â‚¬â„¢ve had good, friendly service at every place weÃ¢â‚¬â„¢ve been over the years, though time didnÃ¢â‚¬â„¢t permit us to stop this time.

One thing that I need to try, and havenÃ¢â‚¬â„¢t yet, is the fare at the Randy Jones BBQ booth on the first level of the stadium. Fans rave about how good it is. IÃ¢â‚¬â„¢ll have to make that the lead item on my list of 2015 goals!!

By the way, the Padres have retired 6 numbers, which are prominently displayed above center field. Maybe they mentioned as much during game broadcasts. The numbers are 6, 19, 31, 35, 51 and the universal 42 for Jackie Robinson. Do you know the other five? They are Steve Garvey, Tony Gwynn, Dave Winfield, Randy Jones and Trevor Hoffman.

Again, thanks to everybody at Redleg Nation for making it such an awesome site!!!! 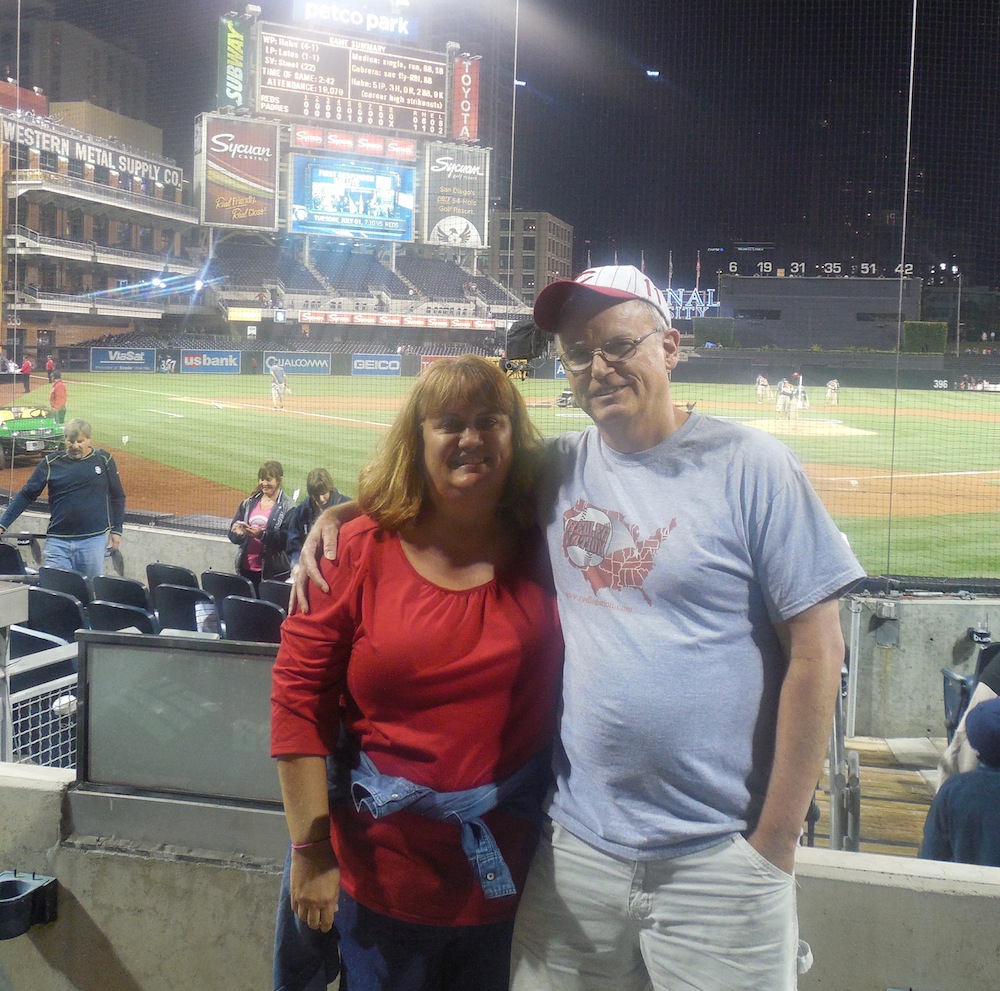 Brian with his wife Kelly and his Redleg Nation t-shirt!

[Edit.: You can see this picture and one of Brian’s daughter Brianna (holding a 50-year-old Mr. Reds bobblehead) along with other photos of loyal Redleg Nation members at our Tumblr page.]