I moved to Cincinnati in 1990, fortunate enough to move there the year of the great sweep of the Oakland AÃ¢â‚¬â„¢s, and I was hooked for life on Cincinnati Reds baseball.Ã‚Â  In 2000, I moved to Southern California, and have been living here ever since. While living on the West Coast has made it more difficult to follow the Reds as closely as I would like, technology and the discovery that changed my life about two years ago, Redleg Nation, have made it easier.

My wife and son are Californians, and try as I might to convert them to Redlegism, no success as of yet. My wife grew up a Dodgers fan, although she isnÃ¢â‚¬â„¢t a die-hard by any stretch, but she supports my addiction to all things Cincinnati. Meanwhile, sadly my son is an Angels fan; although he does admit to his favorite National League team is the Reds. My father in law is a Dodgers fan, and for years we would go to a game when the Reds were in town.Ã‚Â  Two years ago, I got tickets to the Reds at Padres game, and I havenÃ¢â‚¬â„¢t been back to Dodgers Stadium since.

First of all, San Diego might be the most beautiful weather place in the continental U.S. Highs in the 70Ã¢â‚¬â„¢s, lows in the 60Ã¢â‚¬â„¢s, a person canÃ¢â‚¬â„¢t ask for more.Ã‚Â  Secondly, Petco Park is beautiful. I have yet to attend a game at Great American Ballpark, so please forgive me for saying this, but itÃ¢â‚¬â„¢s the best stadium IÃ¢â‚¬â„¢ve been to. ItÃ¢â‚¬â„¢s set right in downtown San Diego, and we enter through the outfield gates but not directly into the seating area.Ã‚Â  Beyond the outfield area, there is basically a park, which they call the Park at the Park. 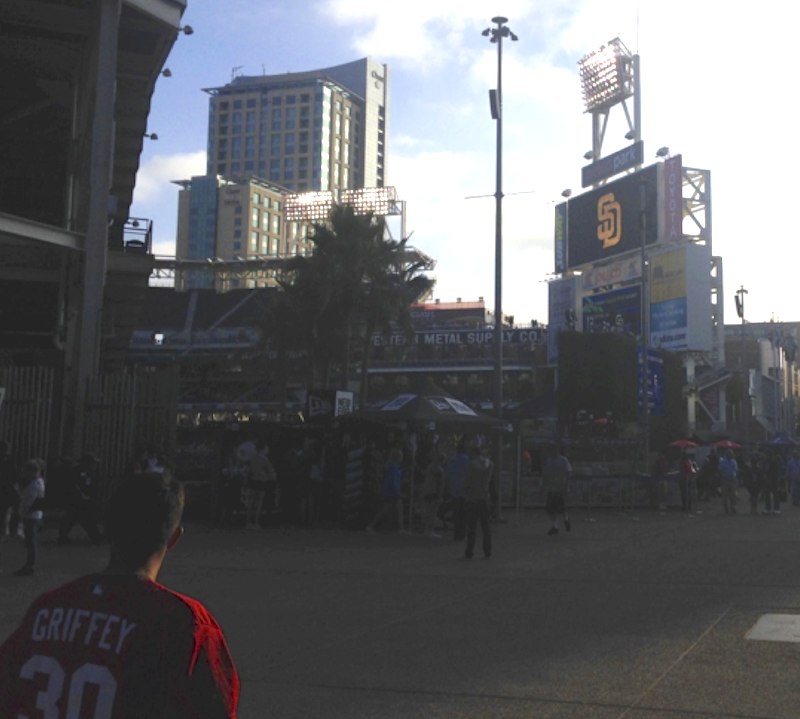 Out in this Park area, there is a playground, a huge hill where fans bring blankets and sit there to watch the game through the open area or on the big screen out there, and even a small baseball field for the kids to run and play on. 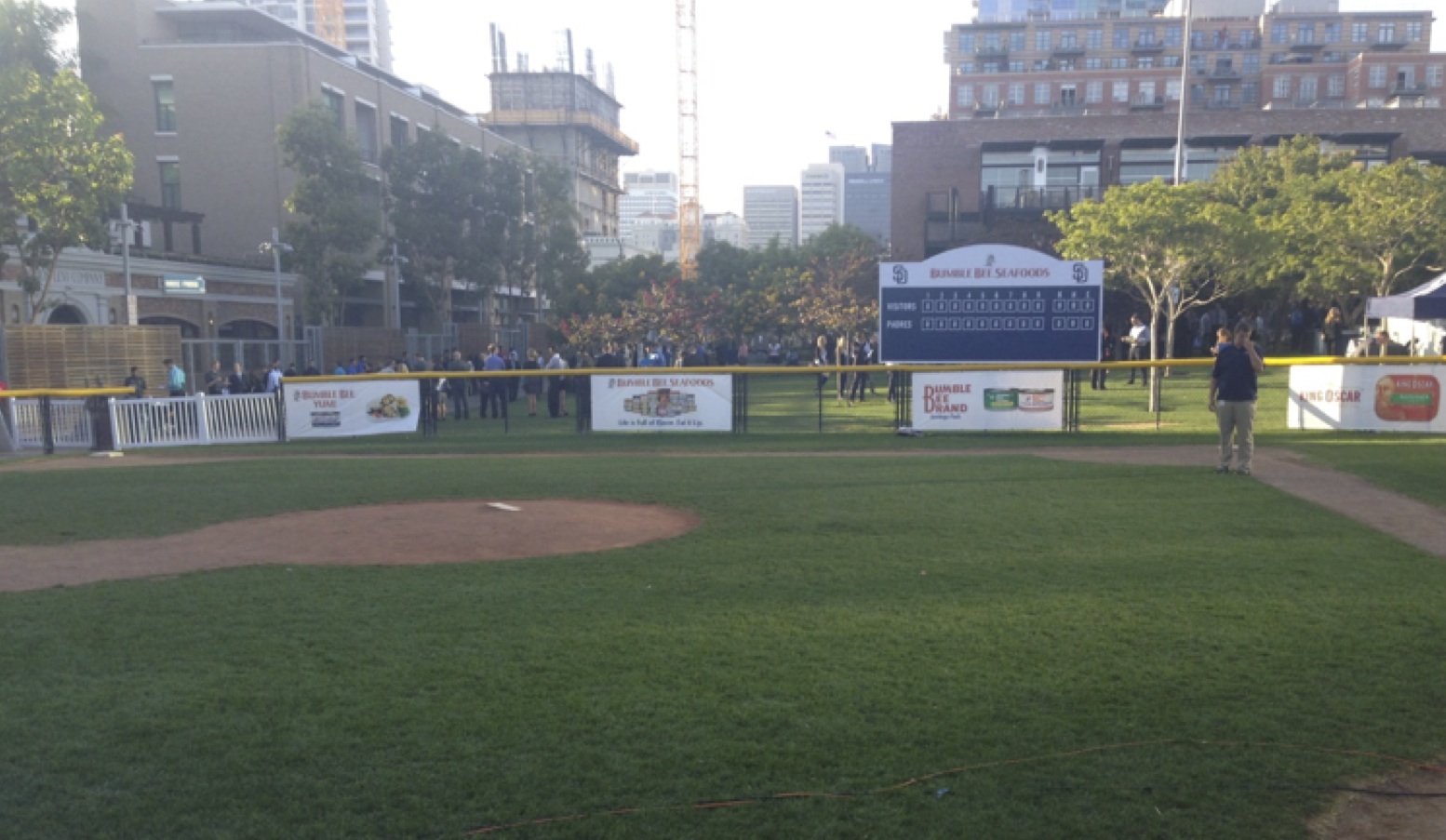 But the best thing out there is this statue of the late, great, Mr. Padre, Tony Gwynn. 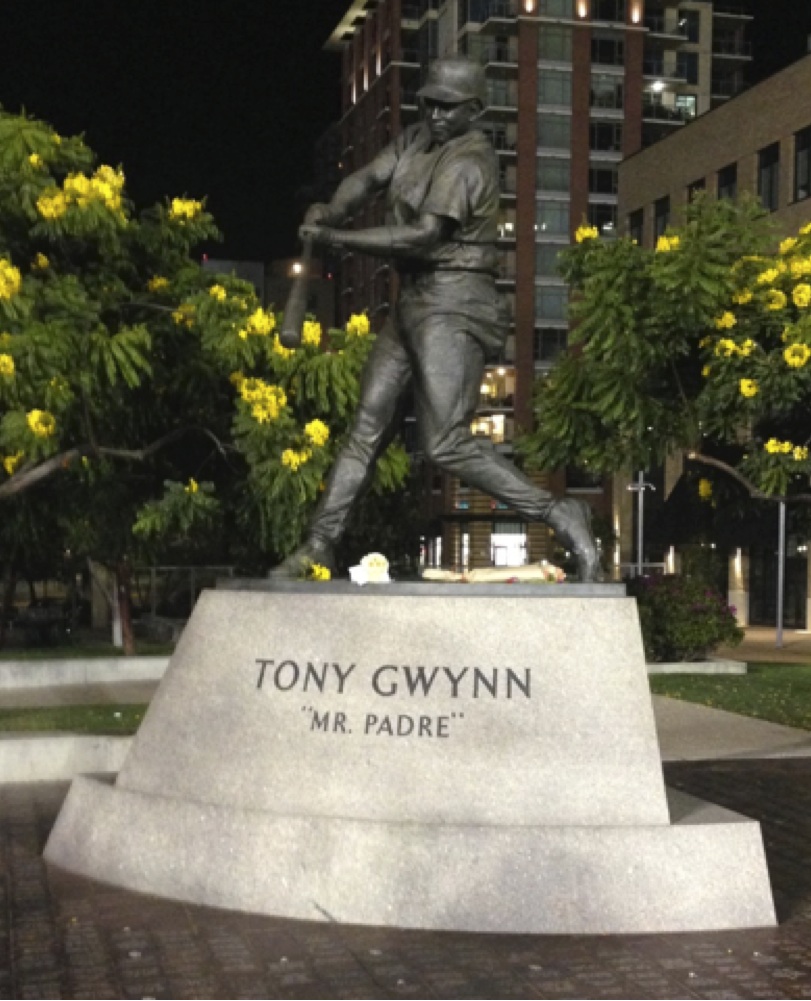 They also have a beach area out in the centerfield bleacher area, right next to the field, for any and all to hang out and play in. Ã‚Â This is Southern California, after all. 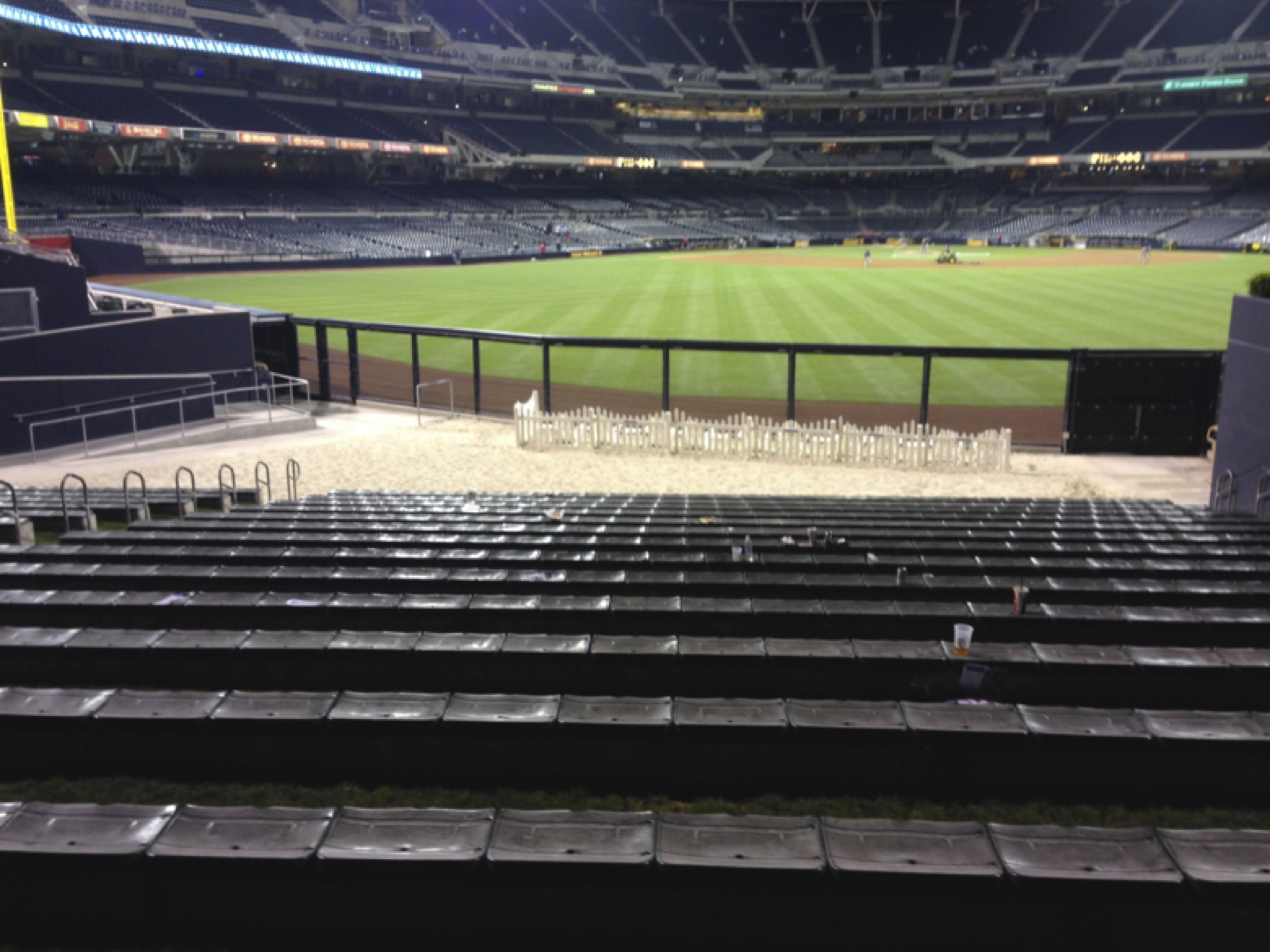 Once at our seats, we were immediately greeted by the overall friendly feel of the people and their fans.Ã‚Â  You can tell they live in San Diego, without many cares in the world. I couldnÃ¢â‚¬â„¢t shake the feeling that they were there to simply hang out and enjoy the beautiful park, and if there was a baseball game to watch, that was secondary. There is an amazing view of downtown through the outfield portion of the stadium, and there is an old metal supply factory that has been incorporated as part of the stadium, even serves as the left field foul pole. During one of the between innings breaks, they showed a cool video of the building of the stadium, from vision to groundbreaking to completion. 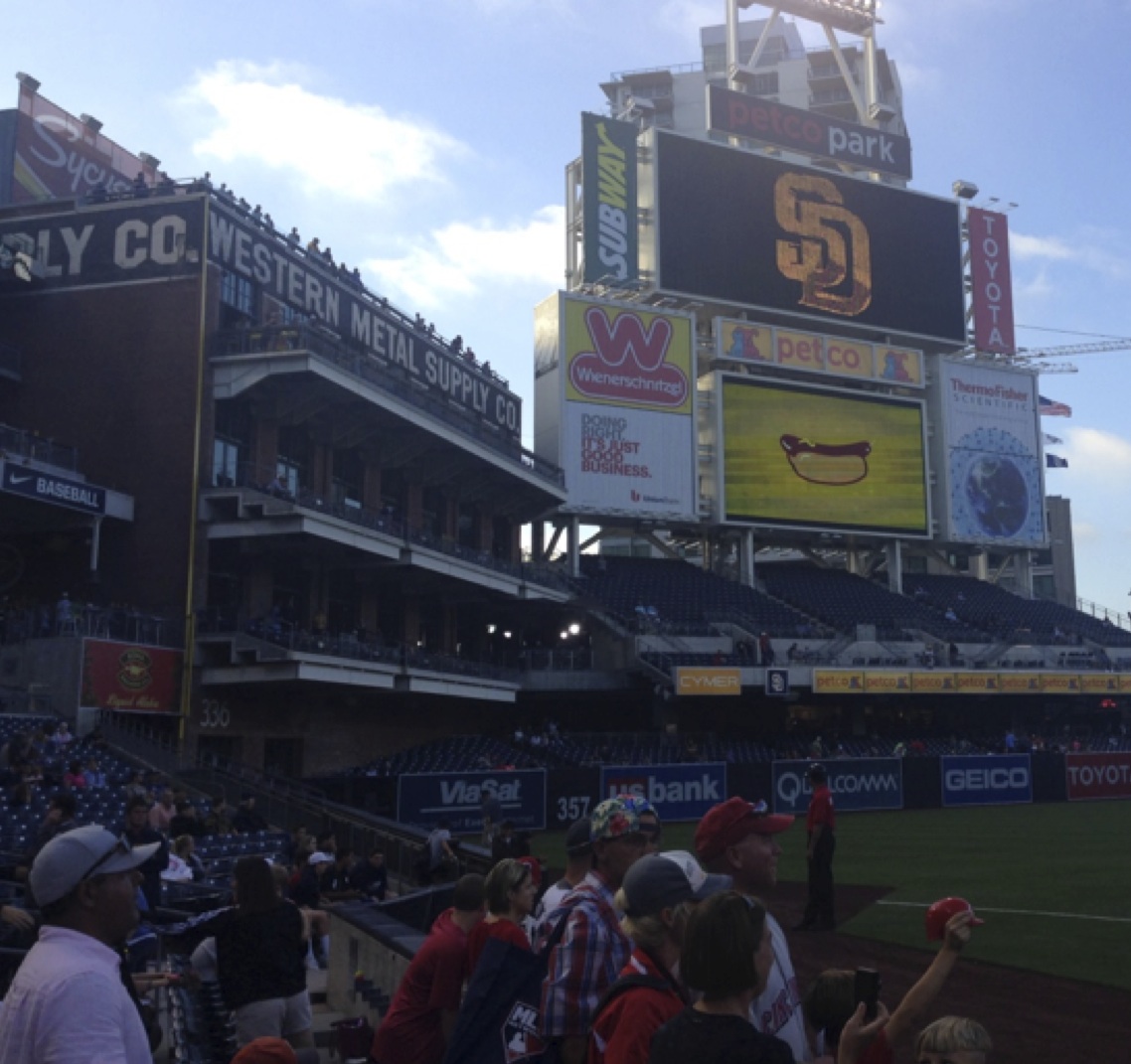 Our seats were second row along the third base, visitorÃ¢â‚¬â„¢s side of the field. As soon as we got to our seats, of course there were crowds of people along the rail trying for autographs and the like, and Super Todd was right there; I was amazed at how friendly he was to each and every fan. He signed and took pictures for a good fifteen minutes, a smile on his face the whole time. Billy Hamilton was also close by, and he looks even skinnier in person. I was fortunate enough to snag an autograph from the fastest man in baseball, one of my highlights of the night. 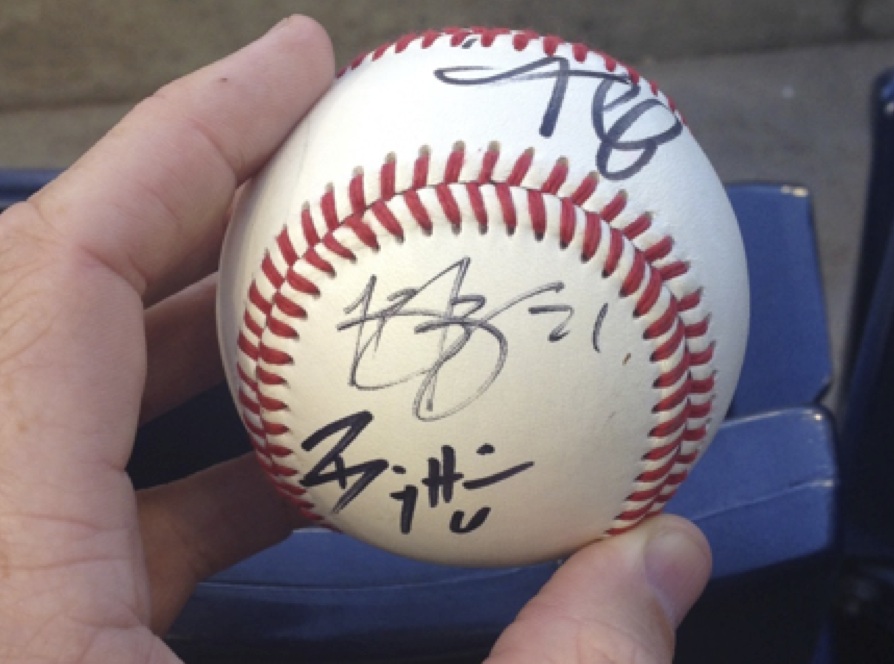 The night was First Responders Night, and the San Diego Police Department was celebrated by being brought on the field and honored. There was even a demonstration by a police dog on how it takes down a suspect; that got a great laugh and reaction out of the Reds. As the police officers left the field, Todd and Billy made sure to shake each and every one of their hands, a class move for sure.

Just like Mike in San Francisco, like any good Reds fan I had to get a beer, which cost more than this delicious plate of BBQ pulled pork, that the fans around said we had to have.Ã‚Â  Also, it was Taco Tuesday, so we had to have a little bit of that as well. 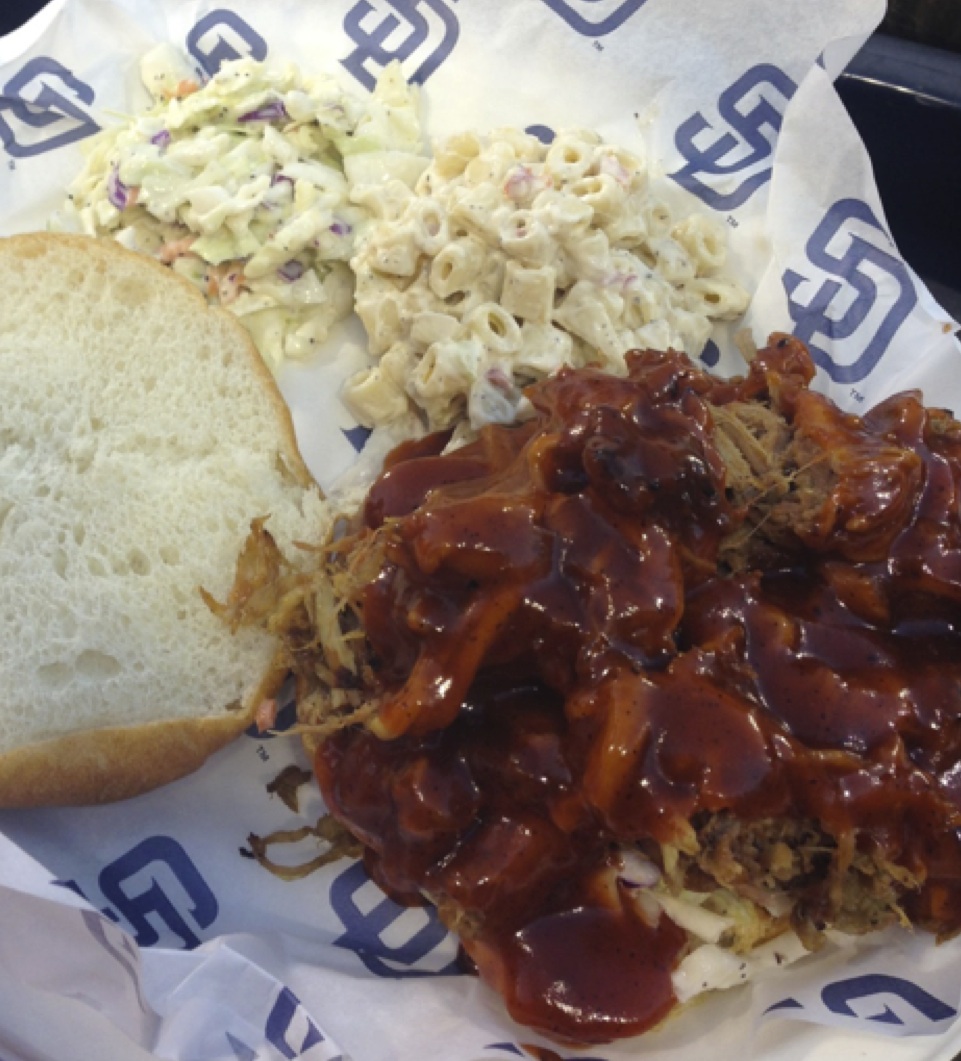 The thing that stood out the most to me was the overall friendliness of the fans and staff at the ballpark. There was no trash talking, no Reds bashing, no negativity towards the visiting team like I have experienced at other parks. It was as if I was being welcomed into their home for the evening as a welcomed guest. The couple next to us were long time season ticket holders, and they were more than willing to answer my questions, ask me questions, and even explain where the ball carries and does not (MesoracoÃ¢â‚¬â„¢s homer to center, according to the gentlemen, doesnÃ¢â‚¬â„¢t happen very often).

In front of us were a couple of Marines, and they were a great time. They were loud for the cheers, conversing with the field security guy the whole time, and we had a great time going back and forth with them about the game. Despite the result of the game, I left feeling content due to the great experience with the fans. I even had a conversation with an usher on the way out about how he thought Leake was going to dominate them and was surprised at the outcome, but he was so nice and polite about it, I couldnÃ¢â‚¬â„¢t help but shake his hand and say Ã¢â‚¬Å“Thank YouÃ¢â‚¬Â for the evening.

Here are a couple cool things I put in my notes last night to share with Redleg Nation:

-When Brandon Phillips came out of the dugout to stretch, there were two young Padres fans yelling for him which put a huge smile on his face.

-Before each inning, a young child would come out near the home dugout and announce the leadoff hitter for the inning. A nice touch.

-It was my first time seeing a defensive shift in person, and itÃ¢â‚¬â„¢s almost unfair.

-One of the Marines in front of me, when the Reds got a hit or two said Ã¢â‚¬Å“IÃ¢â‚¬â„¢m starting to get that feeling like, oh yeah, weÃ¢â‚¬â„¢re San Diego.Ã¢â‚¬Â

-The fans were more excited about the number of hits they had than the runs.

-The biggest buzz from the crowd came in the ninth when the Reds were mounting their rally, almost waiting for the lead to be lost.Ã‚Â  When the challenge came back as overturned, there was a little bit of a cheer, but mostly relief.

-Overall, a nearly perfect night at the ballpark, only falling short because of the lack of a win from the good guys and still no witness of Chapman in person.Ã‚Â  HereÃ¢â‚¬â„¢s to Cueto twirling a gem in the day game today.

My sonÃ¢â‚¬â„¢s highlight of the night: 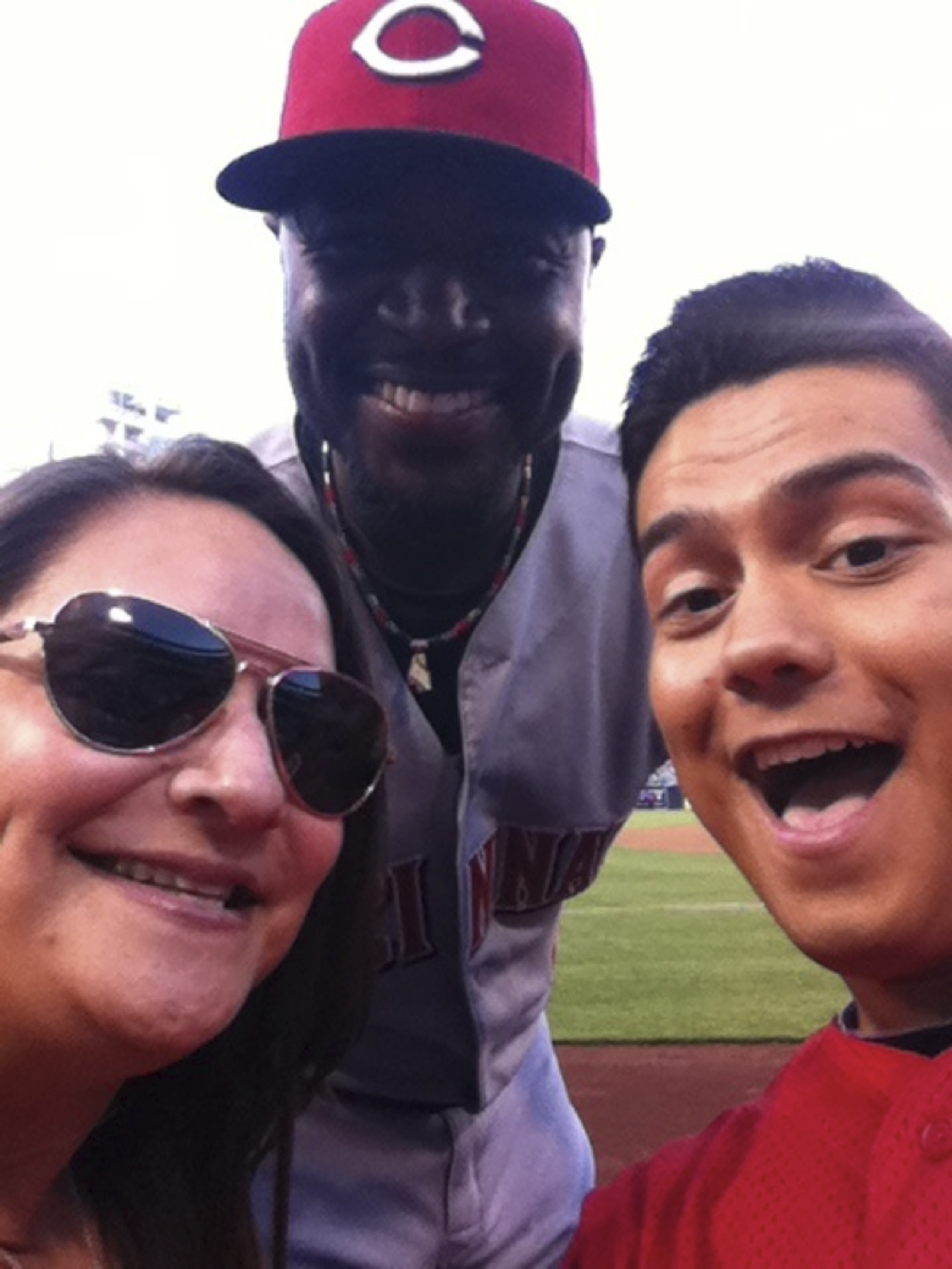 My wifeÃ¢â‚¬â„¢s highlight of the night: 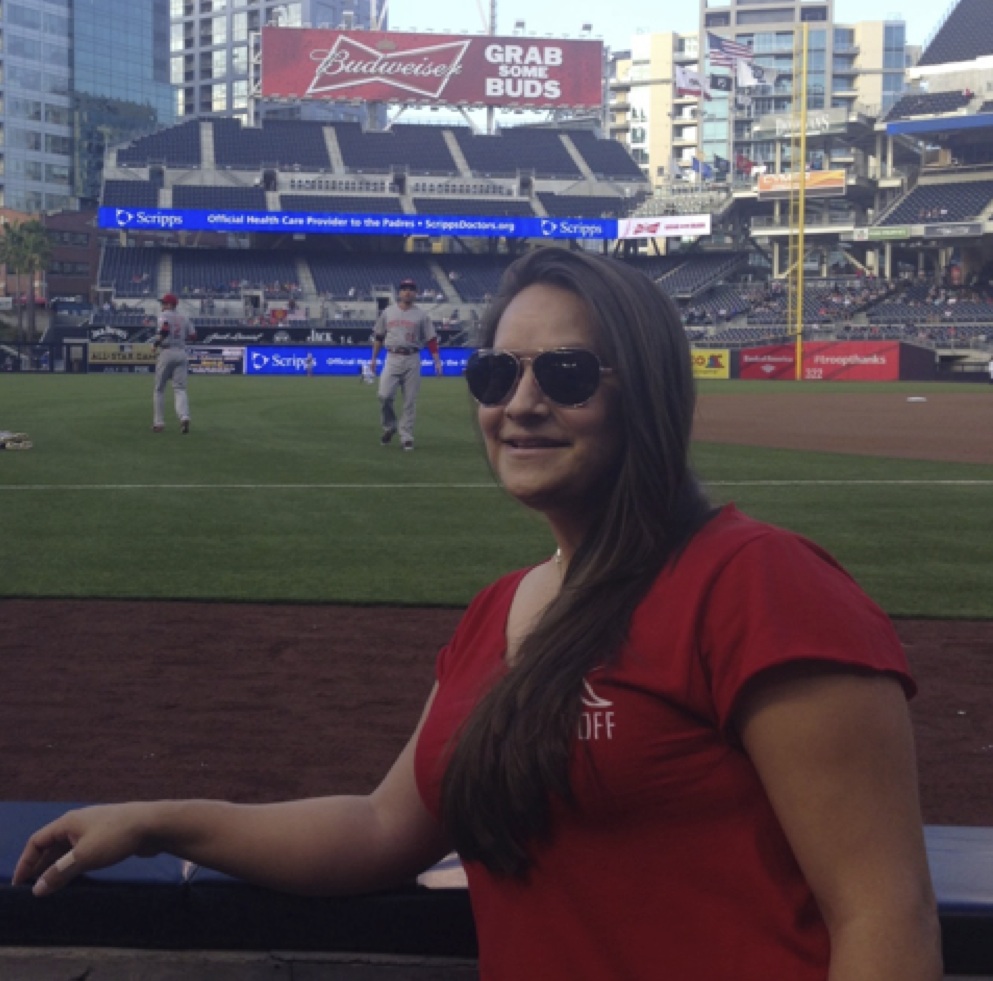 My highlight, my family at the ballpark, my son wearing my Griffey jersey that I bought about 14 years ago, and he begged me to let him wear it then: 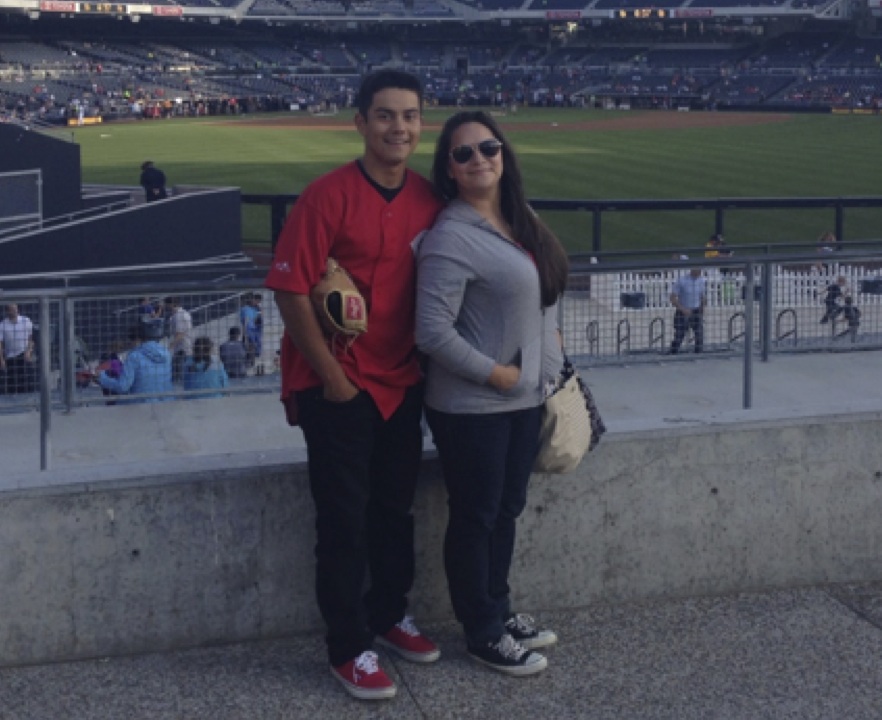 [Here is Chris and his son.] 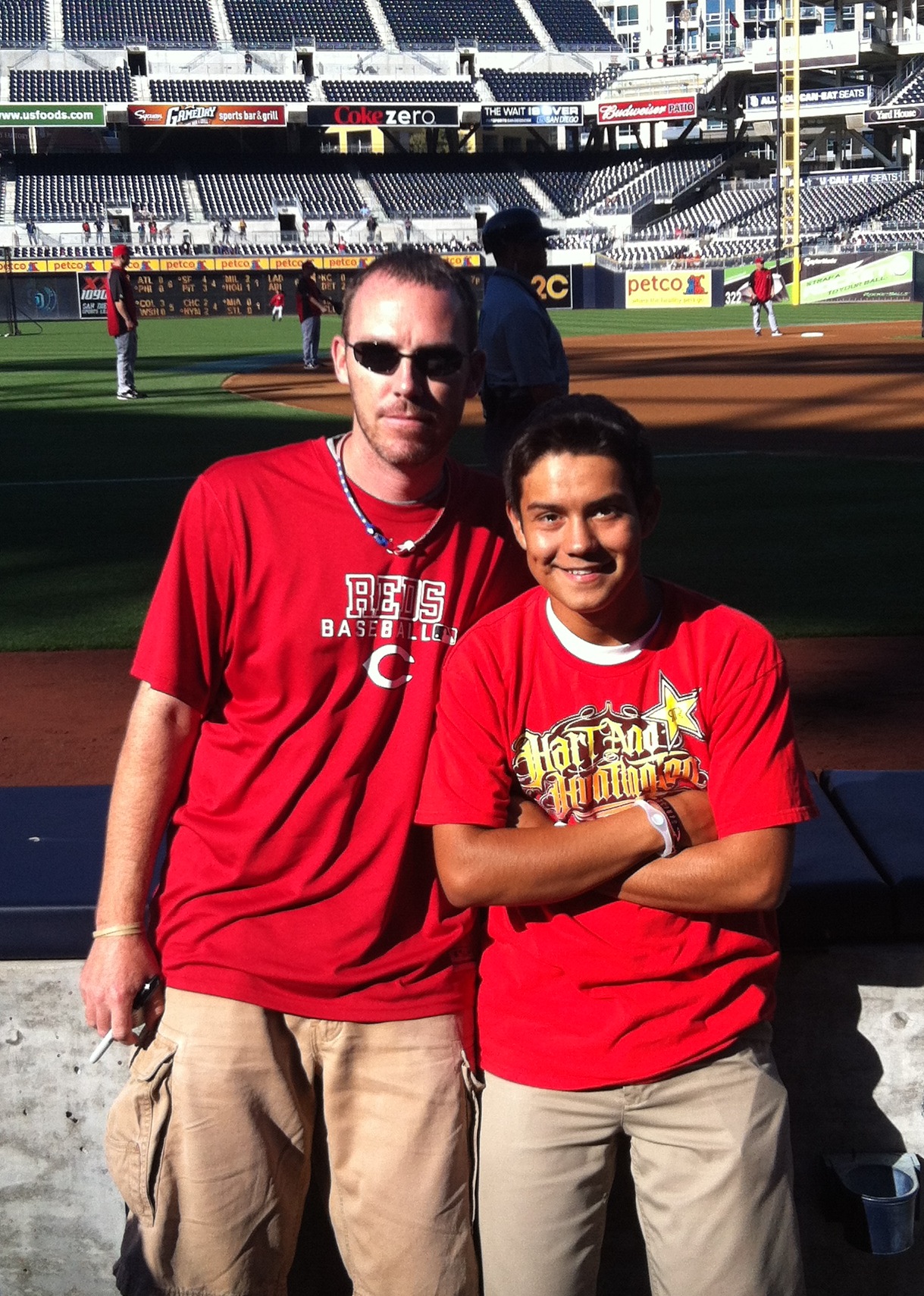