In the eleventh inning, Joey Votto led off with a double. Jay Bruce moved him to third with a bunt. After Bruce Bochy intentionally walked everyone but Bryan Price, Zack Cozart drove in two runs with a line drive single. It was the third straight game that Cozart has driven in a run to break a tie. Chris Heisey tripledÃ‚Â in two more runs. Billy Hamilton then doubled in Heisey. All five runs scored with two-outs. Both intentional walks scored.

Alfredo SimonÃ‚Â held the Giants to three hits and one walk over seven innings. Unfortunately, two of those hits were back-to-back in the fifth inning and led to San Francisco’s only run against him. Simon threw only 80 pitches and recorded no fly ball outs.

Reds hitters were held in checkÃ‚Â for the first eight innings by Matt Cain, former Red Jeremy Affeldt, and Santiago Casilla. They had trouble dealing with Cain’s sharp curveball all night. Joey Votto and Todd Frazier hit deep fly balls that would likely have been home runs at GABP, but were routine warning-track outs at AT&T.

After the Reds fought back to take the lead in the top of the ninth, Aroldis Chapman gave up a hit to Hunter Pence, walked Pablo Sandoval and surrendered the game-tying RBI double to pinch hitter Buster Posey, all before recording an out.

Not so random thoughts

The win expectancy graph for the game looked like a hospital monitor for a flatlined patient who received defibrillation. 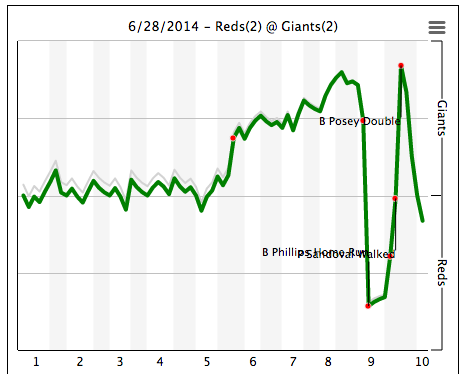 With the dramatic victory, the Reds win three in a row over the Giants and the series and play for a four-game sweep tomorrow afternoon. They are 5-1 on the road trip and their record is 17-8 in June. They have won five series in a row and haven’t lost one since playing the Giants in Cincinnati the first week of June.

Chapman’s blown saveÃ‚Â is part of the cost ofÃ‚Â rigid bullpen roles. Chapman is the closer, closers come in when there are save opportunities, there was a save opportunity, ergo Chapman pitched. This, despite tonight being the fourth consecutive game the Cuban reliever had appeared. All the other members of the Reds bullpen were well rested. But no one else could be used in that situation because itÃ¢â‚¬â„¢s not their stupid role.

The Giants official scorer must be reading the game recaps here. He reversed the error that was charged to Brandon Phillips last night, a scoring decision described at Redleg Nation as brutal. Phillips has one error at second base. For the record, Phillips had problems with two more balls hit to the same spot tonight.

If seeing Joey Votto sliding into third base at AT&T Park on June 29 (in the East) brings back terrifying memories, raise your hand. Also consider penance to the Angry Reds’ Meniscus Hating God.

The Cardinals lost 9-1 to the Dodgers today and with the Reds win, the two teams are now tied in the loss column. Tomorrow St. Louis faces Clayton Kershaw.