Ã¢â€¡â€™Ã‚Â One of last night’s heroes, Zack Cozart discusses the game with Jim Day (click on image to access video). 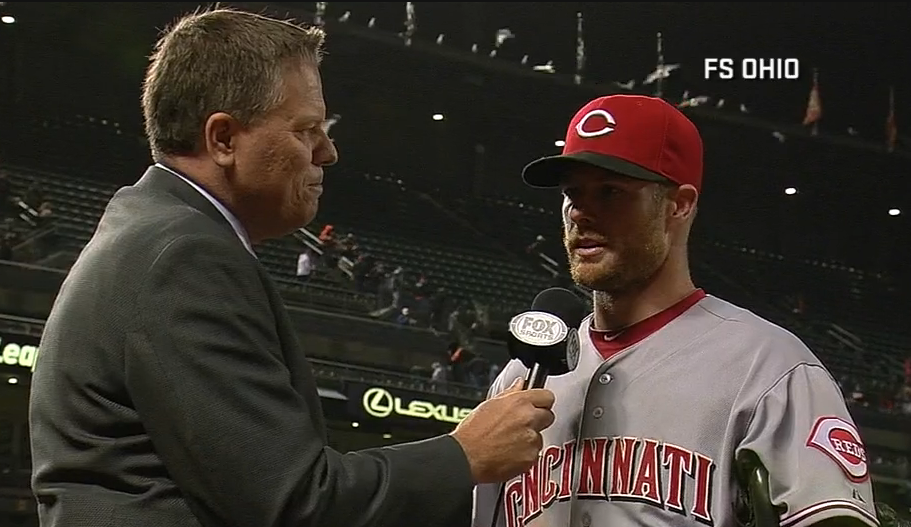 For the third consecutive day, Cozart came through with a hit that broke a tie score. Last night, Cozart singled with two outs in the eleventh inning, igniting the decisive, five-run rally. Cozart also contributed with his glove, recording eleven put outs. The night before, Zack had made an important defensive play ranging far to his right to field a ball and throw off-balance to force Hunter Pence at third base. He and Brandon Phillips teamed up for a slick double play.

Ã¢â€¡â€™Ã‚Â In their Sunday Notes, FanGraphs has a nice long write-up on Reds’ minor league player Jesse Winkler (the second part of the article), including several quotes from the young hitter:

The Cincinnati Reds got one of the best hitters in the 2012 draft when they tookÃ‚Â Jesse WinkerÃ‚Â 49th overall out of an Orlando, Florida high school. In just over 1,000 professional plate appearances, the left-handed-hitting outfielder is hitting .300/.407/.492. The 20-year-old was promoted to Double-A Pensacola earlier this month.

Ã¢â€¡â€™Ã‚Â Last week, in the aftermath of an extra inning game and The Horror, the Reds added Jumbo Diaz and Carlos Contreras to the relief corps, and sent Tony Cingrani to the minor leagues. That meant the Reds were carrying eight relievers instead of the usual seven, and four bench players instead of five. Now, a week later, with the bullpen in much better shape (Parra and Contreras haven’t pitched in six days, Hoover in five days, Ondrusek in four), the Reds continue to play short-handed on the bench.

Should theÃ‚Â Reds add a position player back to the bench, and if so, who should it be?

Ã¢â€¡â€™Ã‚Â Keep on voting for Todd and Devin and other Reds for the All-Star game. Balloting continues until midnight Thursday. Even if Todd Frazier, for instance, doesn’t end upÃ‚Â first in the voting for third base, a strong finish could help build the case for his eventual addition. Post your Sweep Sunday vote tally here: