[Edit.: Sam Howard is a journalism student at Ohio University. He was in San Francisco for a journalism conference and attended the Friday night game between the Reds and the Giants. Thanks, Sam! — spm]

IÃ¢â‚¬â„¢d long heard the hype. I grew up with BondsÃ¢â‚¬â„¢ tape-measure shots into McCovey cove etched into my memory. And I cheered when Junior nailed Alex Rodriguez at the plate in the 2007 All-Star Game.

But that was all through my sterile TV set back in Northwest Ohio. I realize now that I didnÃ¢â‚¬â„¢t have a sense of AT&T ParkÃ¢â‚¬â„¢s grandeur until this past weekend, when I finally made the pilgrimage.

It couldnÃ¢â‚¬â„¢t have been foreseen at the time, but when Otis Redding sang about the tranquility that came with Ã¢â‚¬Å“SittinÃ¢â‚¬â„¢ on the Dock of the BayÃ¢â‚¬Â more than 45 years ago, he pretty much summed up what itÃ¢â‚¬â„¢s like to catch a ballgame at AT&T Park.

IÃ¢â‚¬â„¢ve got to admit I was a little reluctant to deal with Giants fans. The 2012 NLDS still is a fresh wound. I got plenty of jeers about our inability to win at home, but overall I found the San Francisco faithful to be an amiable bunch. Laid-back, even, except when it comes to perhaps two things: Barry Bonds (many still worship that guy) Ã¢â‚¬â€ and Gilroy Garlic Fries.

I only made it to the bottom of the 2nd inning before a slew of grimy-fingered fans around me in the club level section along the 3B line told me to indulge on those. I was happy to report back that, just like the ballpark, the fries met expectations. Concessions workers slop on the locally grown garlic. 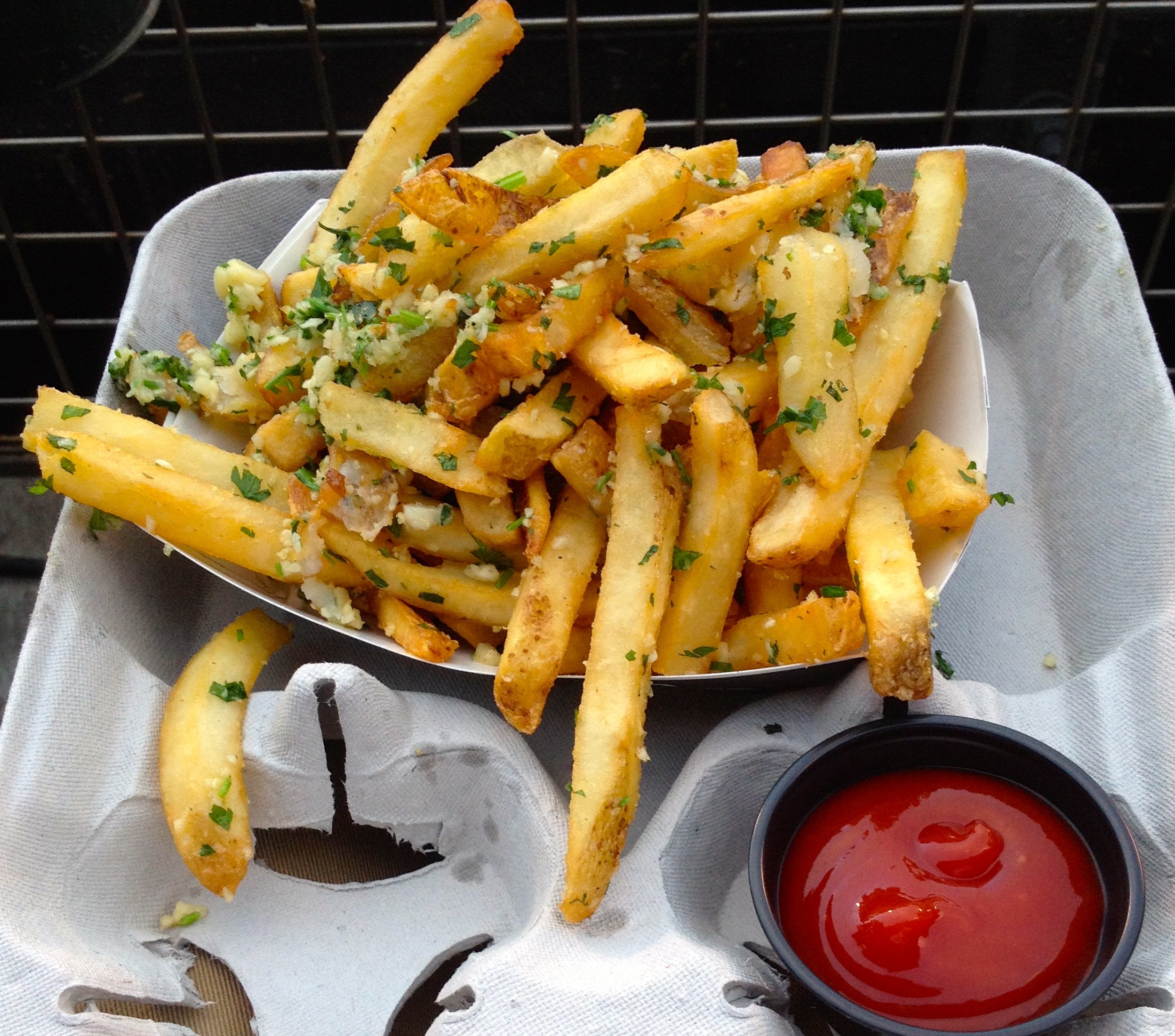 My newly made friends were pleased with my approval, and gave me the thumbs-up while they themselves stuffed their faces, too. I heard from a friend the next day that my breath still stunk, but man those French fries were worth it.

Aside from the godsend garlic fries, another great memory IÃ¢â‚¬â„¢ll have of the game was seeing those pesky Redlegs plate five runs via small ball in the 5th inning. We got the full San Francisco treatment that inning, as fog rolled in across the field in patches right when the RedsÃ¢â‚¬â„¢ bats got hot. I donÃ¢â‚¬â„¢t think you can get that experience on television.

After seeing the good guys take it to Madison Bumgarner, I made the rounds from my seat along the third base line. I guess my inner-12-year-old wanted to get up close to the huge mitt and Coca-Cola bottle in left field. (The bottle, as I found out, actually is a huge slide. But donÃ¢â‚¬â„¢t bother waiting in line for ten minutes; the ballpark workers take the 14-and-under age cutoff as strictly as Dusty BakerÃ¢â‚¬â„¢s 9th-inning-only role for Chapman).

Right underneath the glove, as it were, I met the delightful Rudy Di Emidio, who was at his last game for a while at AT&T Park. A mattress store manager, heÃ¢â‚¬â„¢s relocating to Hawaii in the coming weeks for his job. You could sense the pain in the guyÃ¢â‚¬â„¢s voice talking about saying goodbye Ã¢â‚¬â€ or, I guess Ã¢â‚¬Å“see ya laterÃ¢â‚¬Â Ã¢â‚¬â€ to his beloved Giants.

Ã¢â‚¬Å“It might be years before IÃ¢â‚¬â„¢m back,Ã¢â‚¬Â he told me, though the melancholy quickly deteriorated so he could yell out to Billy Hamilton in center: Ã¢â‚¬Å“WhatÃ¢â‚¬â„¢s the matter with Hamilton? HeÃ¢â‚¬â„¢s a BUM!Ã¢â‚¬Â

He saw Bonds hit 71 and 72 in 2001, was there for Jonathan SanchezÃ¢â‚¬â„¢ no-no and a smattering of other big games. Ã‚Â Rudy had on a crazy Giants poncho that his girlfriend apparently brought back from Tijuana and I told him I just had to get a photo of that. 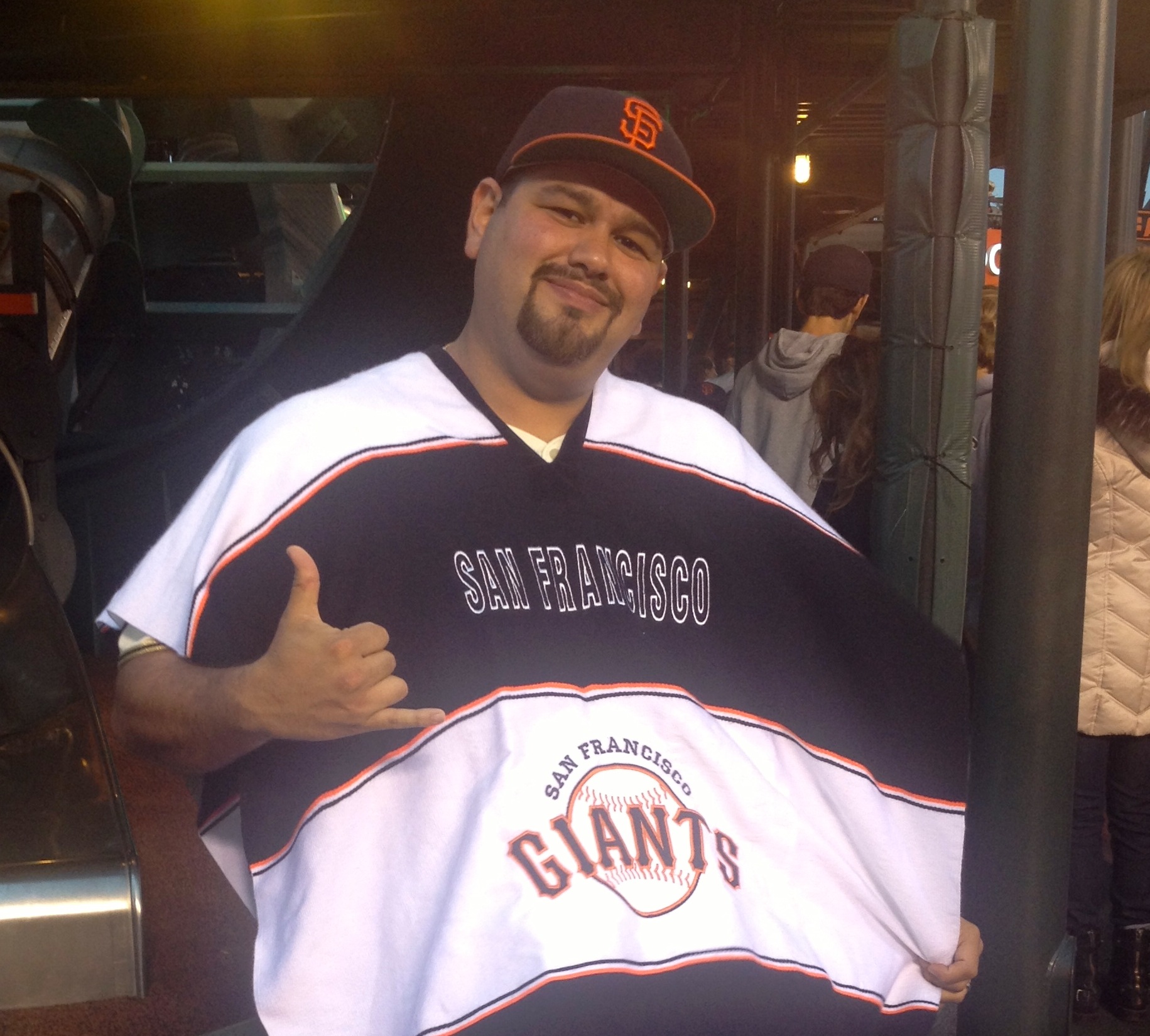 Back to the ballpark. AT&T actually is a great way to see some of San Francisco. There is a truly spectacular view of the Bay Bridge, in particular, from the left field bleachers. 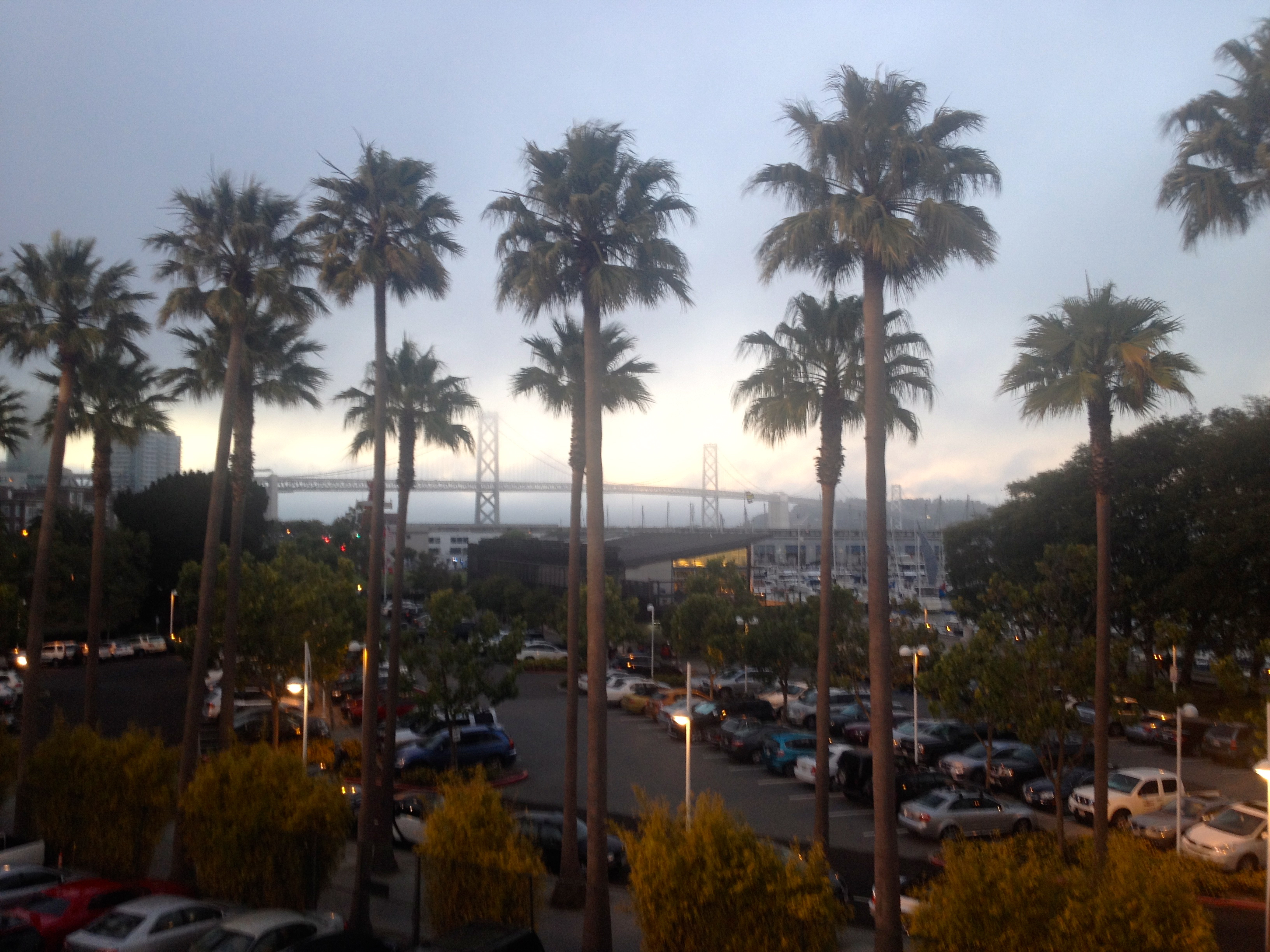 A few quick observations: The centerfield scoreboard has quite the old-timey feel. Hot cocoa seems to be the drink of choice during night games. The Family Feud-style scoreboard game between innings sure beats the Skyline-sponsored versions at GABP. The tally of home run totals from Giants greats on the right field wall is a neat touch. The same can be said for the brick faÃƒÂ§ade along that side of the outfield. Seeing is believing, as they say.

For what itÃ¢â‚¬â„¢s worth, I heard from people throughout the entire ballpark that if youÃ¢â‚¬â„¢re looking to get inebriated and catch a game, the left field stands are your best call. Seemed like a consensus opinion.

I think IÃ¢â‚¬â„¢m more of a right-field stands guy, though. Tickets are cheap (apparently about $20 bucks on StubHub), thereÃ¢â‚¬â„¢s plenty of standing room and the McCovey Cove kayakers are fun to torment. It wasnÃ¢â‚¬â„¢t an especially cold night, but I only saw two kayakers waiting for a tape-measure jack. I yelled down to one of them, and all I got in response was a dejected sort of hand wave. Where have you gone, Barry Bonds?

One fellow I met in the right field stands was 30-year-old Andrew Grinberg, who held down the best job I could imagine any high school and college student could have. He ushered every summer during the early to mid-2000s. Section 106/107, he rattled off to me at the drop of a hat. Andrew worked Game Five of the 2002 NLCS and the 2007 All-Star Game. Sounds like the life. 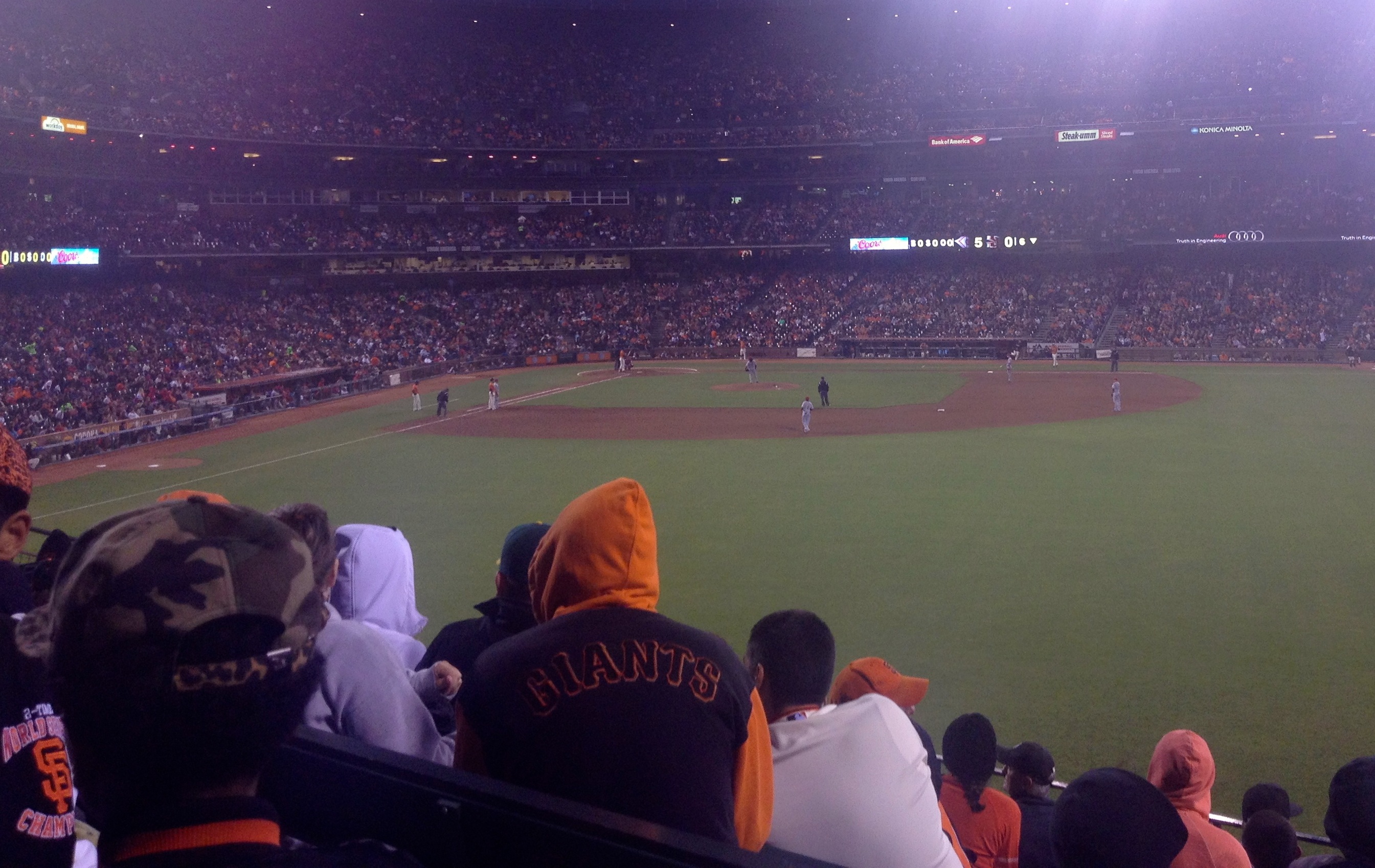 For some reason, behind home plate in one of the hallways hangs a quote from our own Ted Kluszewski. 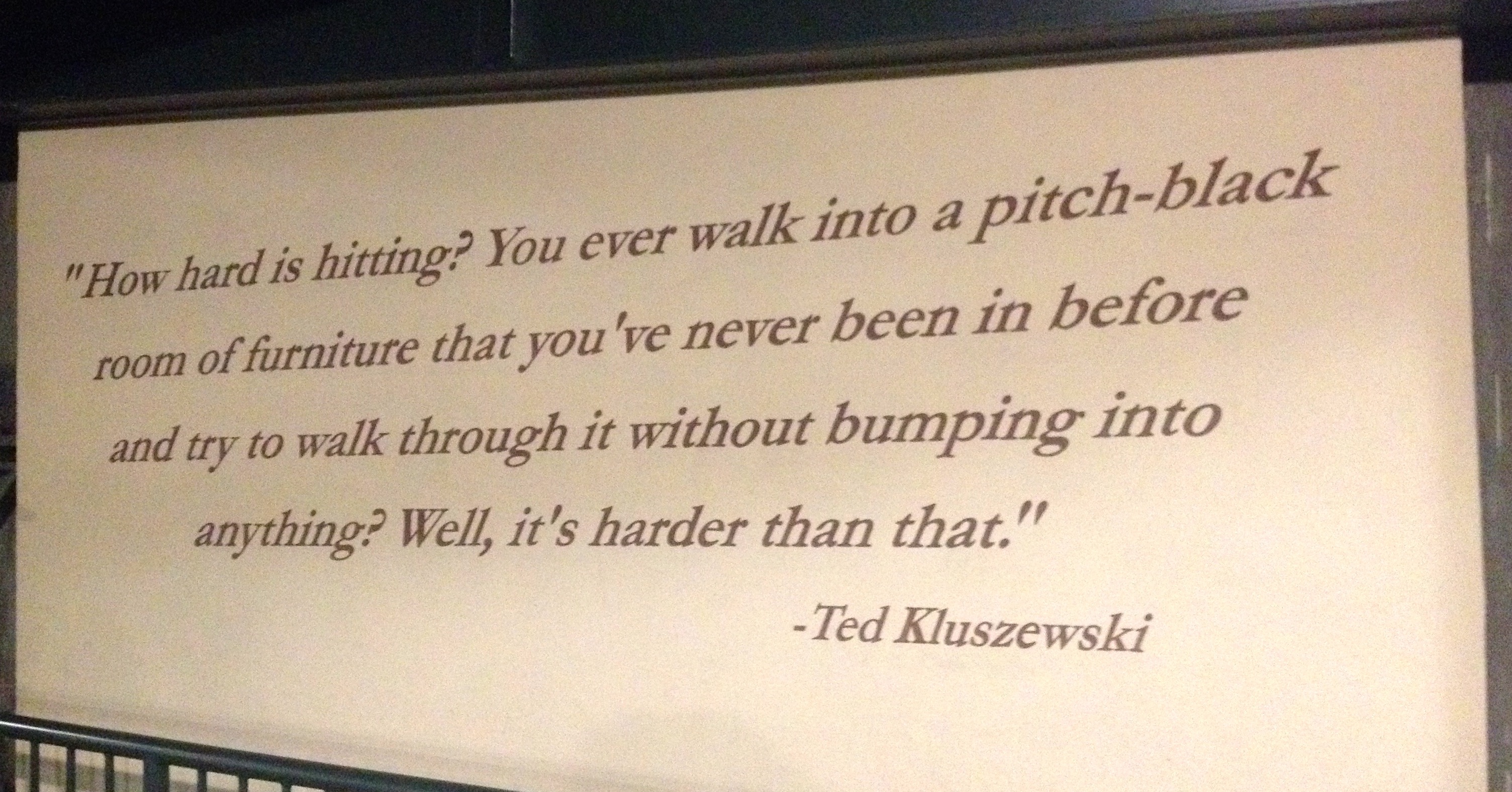 I stopped to talk about Big Klu with a man reading the quote and after maybe a minute or so, he asked me if I wanted a ticket for Ã¢â‚¬Å“the best seat in the house.Ã¢â‚¬Â Of course, I said Ã¢â‚¬Å“yes.Ã¢â‚¬Â

So thatÃ¢â‚¬â„¢s how I finished the game here (all glory to mystery man and, of course, Big Klu):

I got to give Johnny Cueto the standing ovation he deserved amidst a sea of boos in the 9th inning, and my first time watching Chapman in person got to be pretty memorable. Though it is sort of scary to be a few rows back from him while heÃ¢â‚¬â„¢s firing on all cylinders.

We all know this story ends with another tally in the Ã¢â‚¬Å“WÃ¢â‚¬Â column, but for me it ended differently. One of the great things about AT&T is its location; there seemed to be a good number of bars, restaurants and liquor stores to keep people happy after leaving the ballpark. In that mass of people, I came across the crafty left-hander himself, so IÃ¢â‚¬â„¢ll part with one final photo. Thanks for reading, folks, and thanks to the Redleg Nation crew for giving me the opportunity to write about a special night I wonÃ¢â‚¬â„¢t soon forget. 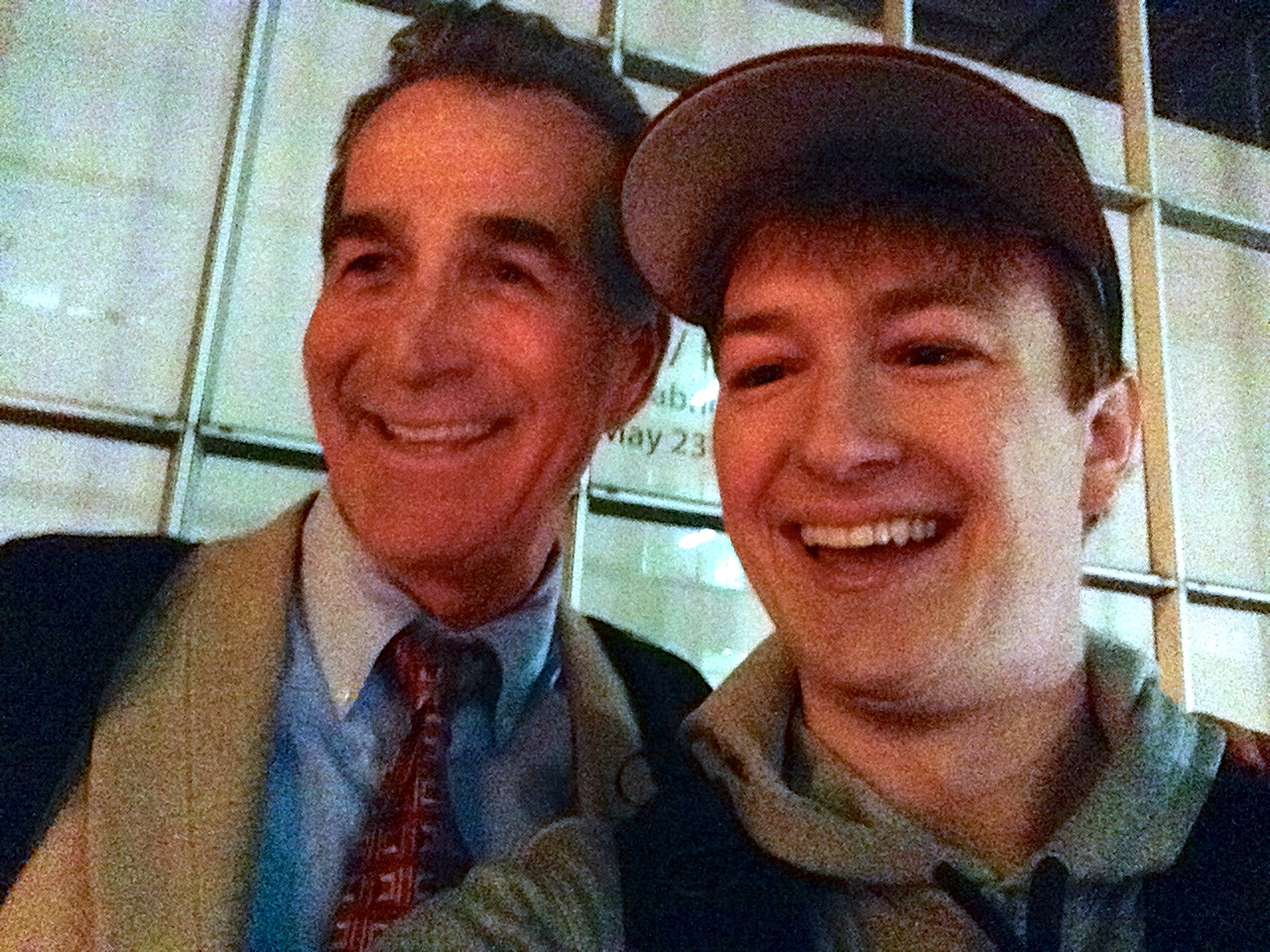