Walt Jocketty just announced (Sheldon) that the Cincinnati Reds have signed 24-year-old Raisel Iglesias, a right-handed relief pitcher from Cuba. The contract is for seven years, through the 2020 season and will pay Iglesias $30 million. Iglesias is considered a shining prospect by his home country. 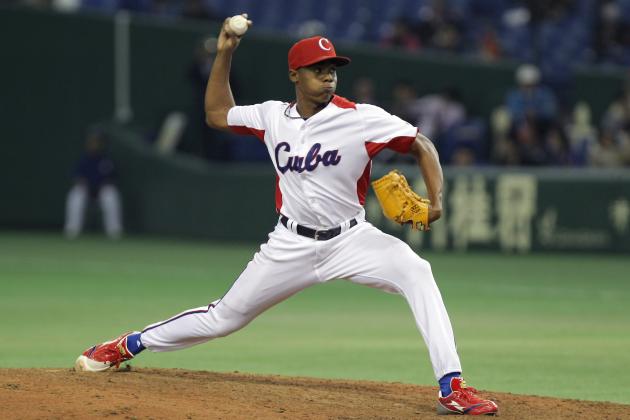 Iglesias will have a couple teammates who speak his language. Aroldis Chapman and Brayan Pena are fellow Cubans on the 25-man roster. Iglesias joins the growing list of players from the Communist island who are finding their way into major league organizations. Jose Abreu (White Sox), Yeonis Cespedes (Athletics) and Yasiel Puig (Dodgers) are prominent recent examples.

Iglesias was primarily a relief pitcher, playing in the top Cuban league. He throws two pitches a 92-95 mph fastball and a variable, sweeping breaking ball in the 76-81 mph range that he uses for swing-and-miss strikeouts.

However, in the second half of the season, Iglesias didn’t pitch as well, with a 5.59 ERA and 24/10 strikeout-to-walk ratio in 29 relief appearances. (Full stats in Cuba). As with most young pitchers, control could be an issue early. During the 2011-12 season, Iglesias walked 54 batters in 76 2/3 innings.

Scouts have had three opportunities to see Iglesias pitch outside of Cuba in the past two years.

Next, Iglesias was a member of the Cuban team that visited the United States last July for a five-game friendship series against the U.S. college national team. Iglesias pitched well, allowing only one hit and no walks, with five strikeouts in five strikeout innings. Here’s a video from Baseball America of Iglesias pitching in that series.

Jim Schlossnagle, the head coach of the U.S. team, said of Iglesias, “He’s lean, has a ridiculously loose arm and pounded the strike zone. He was the guy where you’re like ‘Let’s find a way to get a lead before they get to this guy.” Schlossnagle was named National Coach of the Year in 2010 while managing TCU, a team he just took to the college World Series.

Finally, Iglesias worked out for major league teams in Haiti on May 30. The Reds were one of the teams (Rosecrans) in attendance. One other major league team that was interested in Iglesias was the Boston Red Sox according to a report by Peter Gammons.

More than 200 baseball players have defected from Cuba since 1991. The sleazy and often dangerous process is the byproduct of the ongoing adversarial relationship between the U.S. and Cuba. The U.S. trade embargo against Cuba was implemented by the Eisenhower administration in 1960 and is still law. It prohibits transactions involving Cuban nationals until the defectors establish permanent residence outside of Cuba. Major League Baseball has a similar rule. If a Cuban player comes directly to the U.S. he is subject to the rules of the amateur draft that limit salaries and signing bonuses.

Because of those policies, cigars aren’t the only commodities smuggled out of Cuba. It’s an open secret that human traffickers track down baseball players who are willing to defect, enable their escape and sell them to third party sports agents. As you’d guess, this creates an incredibly dangerous situation for the young defectors. Players won’t talk about the smuggling networks after the fact for fear of reprisal against other players, friends or relatives.

Aroldis Chapman escaped from the Cuban national team when they were traveling in the Netherlands and he quickly became a resident of the European micro-nation of Andorra. Months later he signed with the Reds for $30 million.

In the case of Raisel Iglesias, he first attempted to defect in September of 2013 but was arrested by the police after being forced out of hiding due to dehydration from spending a week in the mountains. Iglesias was given a one-year suspension from baseball. But he attempted another escape a little more than a month later and this time successfully made it to Mexico where he now resides.

Clearance by the United States Office of Foreign Asset Control is the final step in the process before the player can sign.

Future with the Reds

How should the Reds use Raisel Iglesias?

Many scouts feel Iglesias could help a major league team in a pennant race this year as a relief pitcher, perhaps after a month in AAA. It goes without saying that the Reds could use an effective arm in the bullpen.

Or the Reds could use Iglesais in his familiar bullpen role this year and begin training him as a starter next season. What could possibly go wrong with that plan?

In either case, the consensus view is that Iglesias will likely experience rapid improvement after receiving instruction by MLB pitching coaches. “As he gets bigger and stronger, he could be in the mid-to-upper 90s,” said Schlossnagle.