Shared enlightenment from the Twitterverse this morning, as we revel in the excitement of the Reds winning 9-of-12:

Todd Frazier is now one of the Top Ten players in MLB based on FanGraphs’ calculation of WAR. (Nick Kirby)

Keep in mind that WAR includes measures of defense and base running. Others in the top ten include: Troy Tulowitzki, Mike Trout, Giancarlo Stanton, Alex Gordon, Josh Donaldson, Carlos Gomez, Jonathan Lucroy, Andrew McCutchen and Jose Bautista. Notice the NL Central is well represented on that list, with four players. Frazier has more 2014 WAR than Miguel Cabrera, Paul Goldschmidt and Yasiel Puig, among others. Of course, if you read Redleg Nation, you knew the good news aboutÃ‚Â SuperÃ‚Â Todd more than a month ago.

Before last night, the most recent Reds catcher to hit home runs in four consecutive games was Johnny Bench in 1980. (Joel Luckhaupt)

More on the Hot Mes: Fifty percent of his hits and twenty-one percent of his balls in play have been for extra bases. (Kerry Moss) Last night, he became the first player (at least since 1914) to walk twice, get hit by a pitch twice and homer in a game. (Christopher Kamka) Most important of all, Devin Mesoraco leads all major league players (at least 150 AB) in wRC+ with 185. (Nick Kirby) Let’s hope his days of batting seventh are through.

Does anyone else think it is time for Devin Mesoraco to make the Cubs pay for hitting him twice?

… seconds before Mesoraco did this …

Gotta love how that ball ended up in the hands of a determined Reds fan at Wrigley.

And how about Frazier and Mesoraco providing those right-handed bats? They both belong in the All-Star Game.

Johnny Cueto and Homer Bailey are among the group of starting pitchers with the most plus pitches. (Eno Sarris)

Sarris looks at two benchmarks to define plus pitches: swinging strikes and ground balls. Pitches that meet his criteria in either category earn 1 point and 2 points for meeting both. Felix Hernandez has the most plus pitches by this criteria. Cueto ranks fourth and Bailey ninth. This measure doesn’t necessarily correlate with the “best pitchers” since it rewards pitchers who have multiple good pitches more than it values extremely good pitches. For example, Clayton Kershaw’s curveball should probably be rated infinity, but the maximum score here is 2.

The last game at Crosley Field was this date in 1970.Ã‚Â (Todd Radon, h/t OMGReds) 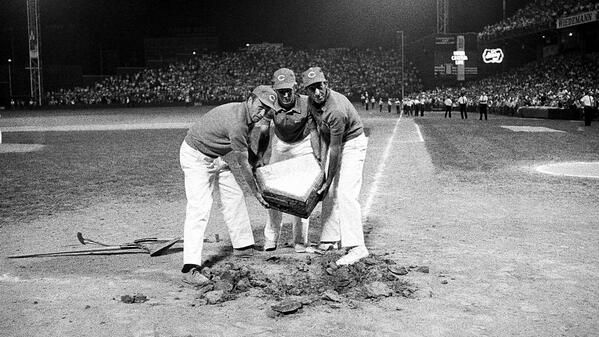 The Reds had played there since 1912. (Sporting News MLB) I remember going to at least one game at Crosley. It was camera day, and fans could go on the field and take pictures of the Reds and their coaches. I remember Pete Rose. And how gigantic Ted Kluszewski’s arms were.