Jay BruceÃ‚Â is heating up. His single quickly removed the zero from the scoreboard in the first inning.Ã‚Â After falling behind, the Reds quickly cameÃ‚Â back in the bottom of the 4th with a Jay Bruce [him again] double, a Ryan LudwickÃ‚Â single, which would shortly result in a run scored when Brayan PenaÃ‚Â hit into the classic 6-4-3 double play.

The Nation got a scare in the 5th inning when Johnny CuetoÃ‚Â pulled up on the basepaths with what looked like a hammy, but turned out to be merely a cramp.

LetÃ¢â‚¬â„¢s all take a moment to exhale.

Zack CozartÃ‚Â has hit safely in 14 of this last 15 games. Just so you know.

Aroldis ChapmanÃ‚Â struck out the side in the 9th. That change has revolutionized his arsenal to the chagrin of major league ballplayers everywhere.

A terrific 6-4-3 double play turned by the Reds in the top of the 3rd, halted the Blue Jays bats before they could really get going.

Brandon PhillipsÃ‚Â left the game with what is reported to be a bruised heel. Enough with the injuries, Baseball gods.

Were it not for the unthinkable happenings of Friday night, this would have been a sweep against the second-best slugging team in the majors. This is significant. If the middle relief stabilizes, this team could go on a serious run and make everyone forget the first two months of 2014.

The RedsÃ¢â‚¬â„¢ offense is bouncing back when they see adversity these days. After the Blue Jays took a 2-1 lead, the Club immediately answered. Another series win. Back to .500. Ã‚Â Back on the road again. Time to get over the hump.

The Daily Billy: T’was a day of rest for the future Rookie of the Year, who made a brief defensive appearance in the 9th.

My Knob Creek Player of the Game: Johnny Beisbol. Pitching, people. It’s what’s for dinner. Honorable mention to Todd Frazier, who hit his 17th HR of the season and played zen-like defense again.

Finally, there was this piece of pure poetry from a wise friend on Twitter: 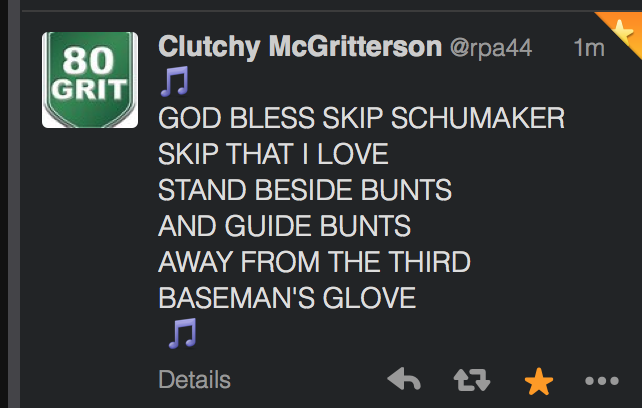