[Edit: This post was written by John Hay, loyal member of the Nation. It’s his second post at Redleg Nation, with the first being Why Votto Shouldn’t Expand the Zone. John grew up in eastern Kentucky during the Big Red Machine era. Johnny Bench was his favorite player. He now lives in Owensboro and is a math teacher. Great work, John! – SPM]

After my first post, it was suggested that an area for additional research and analysis was whether Joey Votto has changed as a hitter and whether the change had been gradual or sudden as a result of his injury. In this article, we will analyze a number of Votto’s stats over the arc of his career, to see if we can gain any insight into those questions. Unless indicated otherwise, stats were obtained from FanGraphs.

First to define the years being considered.Ã‚Â Votto only played in 24 games in his first year in 2007, so we will not bother looking at it. *In 2012, he was hurt on June 29 and missed several weeks, for the few weeks after he returned we can all agree he wasn’t the same hitter. So our 2012 data will come exclusively from the pre-injury period.

The first thing we will analyze are the broad measures of power.Ã‚Â Table 1 shows Votto’s basic stats for 2008 through 2013:

ISO is isolated power and is simply slugging average minus batting average. In other words, it is the number of extra bases per at bat.

Looking at Table 1 a few things stand out. One is the pre-injury portion of Votto’s 2012 season. If he had not been injured and continued at his pre-injury pace, it would easily have been the best offensive season of his career. Another thing we notice is that the number of home runs he hit in 2010 is significantly higher than any other season in his career. Even his 2012 season was only on pace to match his 2011 season. The other thing that stands out is the relative lack of power in 2013. He still hit 24 home runs, but his ISO was the lowest of his career.

One criticism of Votto that has been heard is that heÃ‚Â has started taking more pitches, causing him to pass up pitches that he could have hit solidly, and also getting himself into more two-strike counts, where he needs to protect the plate and thus does not have as much power. First, lets look at the question of whether he is actually taking more pitches. Table 2 shows Votto’s swing rates and 2-strike counts for the six seasons.

From Table 2, we can see that since 2010, Joey Votto has been decreasing the number of swing he takes, especially out of the zone. Votto’s overall swing percentage in 2013 was similar to pre-injury 2012, although he did swing at a higher percentage in the zone.

Is this lower overall swing rate having the effect critics believe it does. Lets look at the two-strike question first.Ã‚Â From Table 2 we see that though Votto is swinging at fewer pitches, it is not making a significant difference in the number of two-strike counts he finds himself in.

The question concerning whether Votto is passing up hittable pitches is more difficult (and maybe impossible) to answer. Let’s start by looking at the following heatmap from BrooksBaseball.net. It shows Votto’s slugging percentage for his career on batted balls in each of 9 areas of the strike zone and areas outside the strike zone. 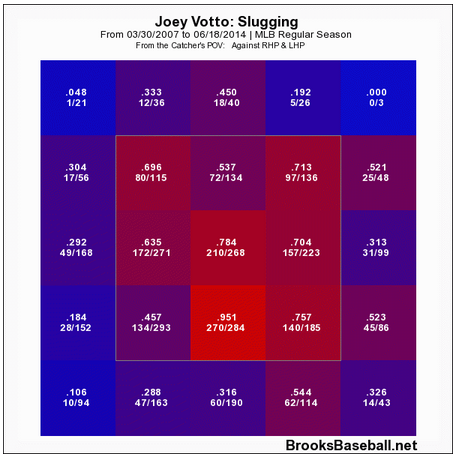 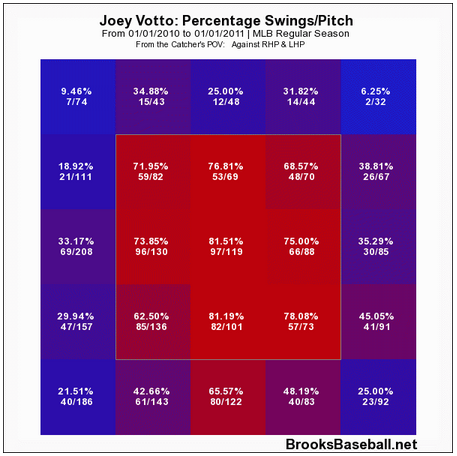 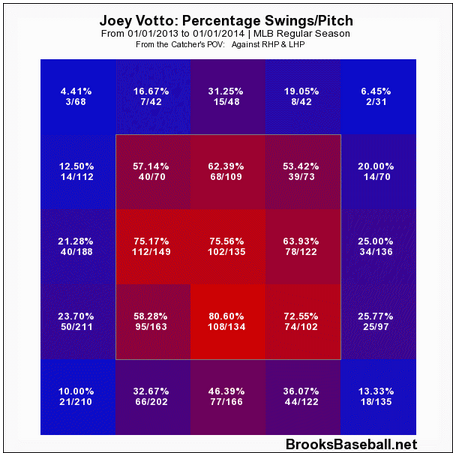 Comparing 2010 with 2013, Votto swung at fewer pitches in 2013, even in his hot zones. Those that say he is passing up hittable pitches might have an argument, but notice in his hot zones, there was no drop bigger than 6 percentage points, while his swing rate on pitches below the strike zone decreased at least 9.99 percentage points in every area. We can’t know for sure, but his decrease on swings in his hot zone may be a side effect of trying to lay off pitches outside the zone.

In 2013, despite hitting more line drives than in 2009 or 2010 and fewer fly balls than in either of those years, his batting average is lower than in either season. Using the PITCHf/x search tool at BaseballSavant.com we find that in 2013, 37.2 percent of his line drives were outs. For his career, 27.2 percent of his line drives resulted in outs. That comparison indicates 2013 might have been an unlucky year for Votto and he wasn’t rewarded for hits off his line drives at nearly the rate he had in the rest of his career. Or he might have been hitting more soft line drives because of his injury. Or some combination of those factors. If Votto’s hit-rate on line drives in 2013 had matched his career rate, his slash line for 2013 would have been .329/.455/.501 (AVG/OBP/SLG). His ISO would have been .172.

Table 3 also gives us insight into the key to Votto’s great first half in 2012. Looking at the batted ball profile, we see that he had the highest line drive percentage of his career. Ã‚Â On top of that his line drives were going for doubles 32.3% of the time. This compares to a career percentage of 18.9%. (BaseballSavant) Ã‚Â Votto was on pace for 70 doubles in 2012, which would have broken the all-time single season record of 67.

The second thing that stands out from the data is that Joey Votto hit significantly more home runs in 2010 than in any other season despite his fly ball rate not being extraordinarily high. Let’s look at what percentage of his fly balls went for home runs over his career and also how far he is hitting the ball (baseballheatmaps.com). 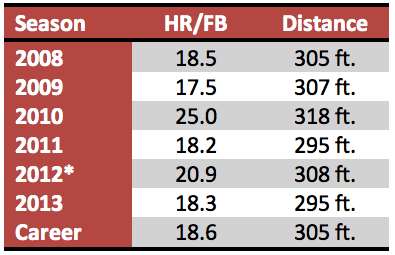 So, why did his fly balls become home runs at such a much higher rate in 2010?Ã‚Â In 2010, Votto hit the ball much farther than he did before or has done since. In fact, his 2010 distance of 318 ft is almost as far from his career average of 305 feet than is his post-injury 2012 distance of 287 feet. So, the higher HR/FB ratio in 2010 can be explained by better distance, butÃ‚Â there is no explanation for the enhanced distance.

In regards to Votto’s lower power in 2013, we notice in Table 4 that his distance in 2013 was the same as it was in 2011 and his HR/FB ratio was almost identical in the two seasons. So why was his isolated power so much lower? The first hint is in the batted ball profile. His ground ball percentage went up in 2013 and since ground ball hits are usually singles, they reduce ISO. The second reason was the number of fly balls that went for doubles. For his career 11.7% of Votto’s fly balls have resulted in doubles. In 2013 this percentage was 4.9%. (Stats from BaseballSavant). Ã‚Â Once again, we don’t know if this is just bad luck or a symptom of something else.

It’s worth remembering that Joey Votto is not immune to significant changes and trends in Major League Baseball. Over the period in question, 2008 to 2013, the major league batting average has fallen from .264 to .253, slugging has declined from .416 to .396, ISO has fallen from .152 to .143 and the strikeout rate has risen from 17.5 to 19.9. Those are extremely large changes in a short period of time.

The suggested causes for these trends are: greater deployment of defensive shifts, more advanced data on hitter weaknesses, soaring fastball velocity and bullpen specialization. These trends continue in 2014. Any analysis of the arc of Votto’s career in terms of hitting, must account for the fact that run prevention is increasingly winning over run production in general.

The purpose of this post is to provide several levels of data that would allow us to offer theories about whether and how Joey Votto has become a different hitter from the start of his career in 2008.Ã‚Â The data allows a few tentative conclusions.

First, Votto has gradually been reducing the number of pitches he has swung at, especially out of the strike zone. This trend began after his MVP season in 2010 and included the pre-injury part of 2012. Given the data, especially from the first half of 2012, it does not appear that Votto’s patient approach is the result of his injury or what is causing his power decline.

Votto did experience a significant drop in power in 2013. This was the result of two factors. He hit more ground balls. And he had worse results on line drives and fly balls. Given this all happened in the same season, it is reasonable to think his injury the year before may have had a lingering effect on this, though we can’t be certain.