The Reds outfield was a little less crowded in 2011. Ã‚Â Laynce Nix departed in the off-season, and Jonny Gomes struggled and was eventually traded in July. Ã‚Â This gave Heisey a chance to play more regularly, and he sure didn’t disappoint. Ã‚Â Heisey showed impressive power, hitting 18 HR in just 308 PA. Ã‚Â Heisey’s 15.5 AB/HR rate was the 4th best among all NL players with 300+ PA, and his 113 wRC+ was the fourth best on the Reds in 2011.

Going into the 2012 season, it finally looked like Chris Heisey was going to get a shot as the full time LF, but a month before spring training started, the Reds signed Ryan Ludwick. Ã‚Â Heisey was still supposed to be the Reds primary guy in LF, but Ludwick had a surprisingly great offensive season (.275/.346/.531, 26 HR, 134 wRC+) and took over as the Reds everyday LF. Ã‚Â In June, Heisey was able to get 15 starts in CF for the struggling Drew Stubbs, but he had a bad month (.228/.265/.316). Ã‚Â Drew Stubbs got hot for a week in July, and Heisey would only get 33 starts from July-September (0 starts in the five game NLDS). Ã‚Â Despite completely outperforming Drew Stubbs in 2012, Dusty Baker decided to go with Stubbs. Ã‚Â It certainly didn’t help the Reds, as Stubbs reached base just 4 times in 19 PA in the NLDS.

The Reds LF and backup CF/RF situation inÃ‚Â 2014Ã‚Â has been all over the place. Ã‚Â When healthy, Hamilton and Bruce have started everyday in CF and RF, and rightfully so. Ã‚Â In LF, Ludwick has made 48 starts, while Heisey has made 11, and Schumaker has made 8. 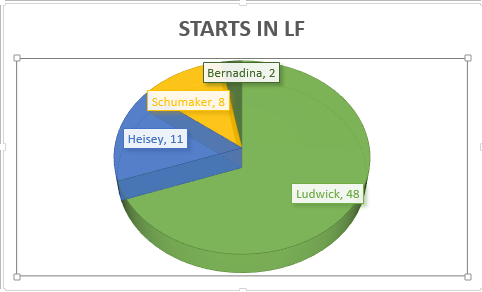 Now, among backup outfield starts at all three positions behind Ludwick, Hamilton, and Bruce has been puzzling. Ã‚Â Heisey has made 23 starts, Schumaker has 20 starts, and Bernadina has 11 starts. Ã‚Â Keep in mind, with injuries and so forth there have been times where these guys have started in the same game, but Schumaker didn’t make his first appearance in 2014 until May 3rd. 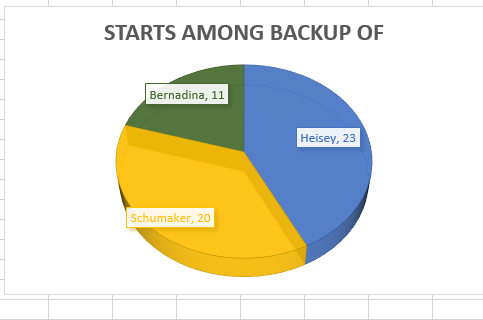 The recent usage in LF is even more puzzling, as Skip Schumaker has started in 8 of the last 17 games (since June 30). 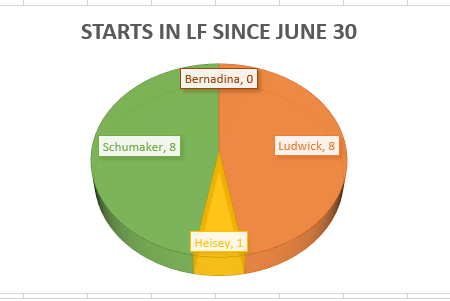 Now that you know the playing time given in the Reds OF, let’s compare Heisey, Ludwick, Schumaker, and Bernadina in 2014:

As you see, Ludwick has been hands down the best offensive player (look at OPS and wRC+). Ã‚Â However, you see that Heisey has been worth a full win, and the other players have all been worth a negative amount of wins. Ã‚Â Heisey has been below average offensively in 2014, as he has posted just a 75 wRC+ (100 is average). Ã‚Â We aren’t even halfway through the season though, and we are cautioned not to use small sample sizes to draw conclusions. Ã‚Â Let’s look at the the four players between 2010-2014, when Heisey first reached the majors.

As you see above, Heisey has been worth nearly twice as many wins as Ludwick, and has blown Bernadina and Schumaker out of the water. Ã‚Â The offensive difference between Heisey and Ludwick over the last 4+Ã‚Â years is pretty small too. Ã‚Â Ludwick’s OPS is only 18 points higher than Heisey. Ã‚Â So why is Heisey worth so many wins? Ã‚Â The answer is simple: defense.

The two stats used above, DRS (defensive runs saved) and UZR/150,Ã‚Â are the best advanced stats at measuring fielding. Ã‚Â As you see, Heisey is far and away the best fielder. Ã‚Â Defense is an important part of baseball. Ã‚Â Saving a run in the field is just as important at producing a run at the plate. Ã‚Â The best thing about Heisey is that heÃ‚Â has dramatically improved defensively since entering the big leagues in 2010. 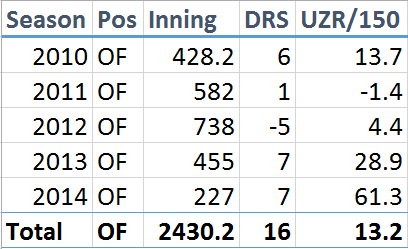 Those are certainly very small sample sizes for defensive numbers, but it does show that Heisey is still playing a high level of defense.

Heisey has proven through over 1200 career PA that he is a below average hitter. Ã‚Â What he has proven is that he is a valuable player, and the Reds best option in LF. Ã‚Â You can make a case that LF isn’t one of the most crucial positions defensively, and Ludwick’s slightly better offensive abilities make him a better option (especially since he has been swinging a hot bat of late). Ã‚Â I would certainly disagree with that however. Ã‚Â I believe Heisey’s overall value in the field, his speed, his power, and that he is much six years younger than LudwickÃ‚Â with more upside would help the Reds win more games over the course of the season.

What there is no debate about is that Heisey is a far superior player to Skip Schumaker, and there is no reason for Schumaker to ever gets starts over Heisey. Ã‚Â Schumaker (who bats left-handed) isn’t even better offensively than Heisey (who bats right-handed) against right-handed pitchers. Schumaker has a .571 OPS against RHP in 2014, while Heisey has a .672 OPS.

There have been two myths about Heisey that should be disposed of:

1) He is only a good pinch hitter.

2) He has had his chances to start

Heisey has NEVER started more than 19 games in a month in his career. Ã‚Â There are only three months in his entire career that he has more than 15 starts.

Here is who Chris Heisey compares to using WAR since 2010 (despite less games and PA): 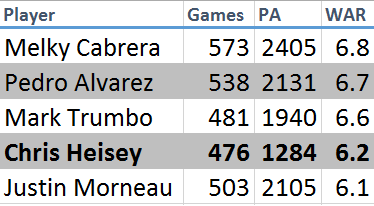