Search
Home
How Valuable Is...

Back in November, I wrote a piece about The Value in Zack Cozart.Ã‚Â  I have been meaning to write a “sequel” piece about the value of Todd Frazier, but I just haven’t able to find the time to do so. Ã‚Â However, with Frazier’s great success here in 2014, I couldn’t wait any longer. Ã‚Â Let’s begin…….

*please note: all stats include games played through 6/1/14

Frazier was seen as having a bad year in 2013 by many people associated with the Reds, but in reality he was actually about league average. Ã‚Â If you only looked at his .234 AVG, you would probably think he was bad offensively. Ã‚Â Frazier actually posted a 96 OPS+ and a 100 wRC+ (a 100 is league average in both statistics), two of the best stats at evaluating an offensive player. Ã‚Â Frazier’s .314 OBP was just above the league average mark of .312, and his .407 SLG was above the league mark of .389. Ã‚Â He also had an unlucky season looking at his BAbip, as in 2013 his BAbip was only .269 (average BAbip is around .300). Ã‚Â My personal favorite thing about Frazier’s under-appreciated 2013 season was that his BB% rate was 8.3, above the league average of 7.7, and the fourth highest on the Reds behind Votto, Choo, and Bruce. 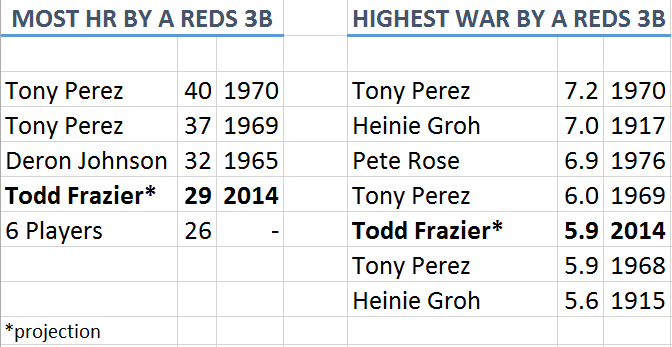 If you are using WAR, each win on the 2013 free agent market was worth approximatelyÃ‚Â $6 million according to Fangraphs. Ã‚Â That means Frazier is on pace to be worth around $36 million, and has already been worth around $12 million in 2014. Ã‚Â Now while clearly no team would pay $36 million for Todd Frazier in 2014, and he might not finish with anything close to a 5.9 WAR, this does show just how valuable he is worth.

The best way of seeing just how valuable Frazier is, would be to compare him to other third baseman. Ã‚Â We want to avoid the small sample size of just two months of 2014, so let’s look at 2012-2014. Ã‚Â Frazier is not on the same level as David Wright, Adrian Beltre, Evan Longoria, Chase Headley, or Miguel Cabrera (who moved to 1B in 2014), but here is how he stacks up against the next tier of high paid 3B:

For the Reds to be getting the level of production out of Frazier for the money he is making is remarkable. Ã‚Â The Reds are stretched thin payroll wise, and the Reds couldn’t afford $10+ million for a player of the same caliber as Frazier. Ã‚Â This is also a reminder of how important the draft and development of minor league players are, especially for teams who don’t have the payroll of the Yankees or Dodgers. Ã‚Â You need a few of these players producing at a high level in the majors on league minimum contracts.