[Edit.: Darryn Fessel, loyal Nation member, attended three of the games between the Reds and Diamondbacks this weekend. He filed this report about his trip to Chase Field in Phoenix. Thanks Darryn! — spm]

After living my entire life in Cincinnati, I accepted a job offer in Phoenix and moved here with my wife, Aleshia, last fall. Ã‚Â Last weekend was not, however, our first Chase Field experience as my interview for said job, by lucky coincidence, occurred the same week as the Reds made their last road trip to play the Diamondbacks in June 2013 and we managed to catch a game of that series.Ã‚Â Perhaps that was an omen regarding our future move.

Of course, if you’re going to be a Reds fan and not live in the Queen City, then the Valley of the Sun is probably your next best bet in terms of baseball. Given my new location, I was able to attend four spring training games: three at Goodyear Ballpark and one against the Angels at Tempe Diablo Stadium. Spring training will absolutely make you feel like a kid again, and I highly recommend you make it out here if you ever have the chance.

Now back to the matter at hand. Chase Field is located in downtown Phoenix, just a few blocks from the city center and across the street from the convention center. US Airways Center, home of the Suns basketball and Arizona Rattlers arena football teams, is also next to the ballpark. There is an entertainment district adjacent to this area with several bars, restaurants and hotels within walking distance. The Valley Metro light rail line runs right past the ballpark, allowing riders to get to games from Phoenix, as well as Tempe and Mesa to the east. I happen to live on the line and use it to get to anything downtown, including the games. 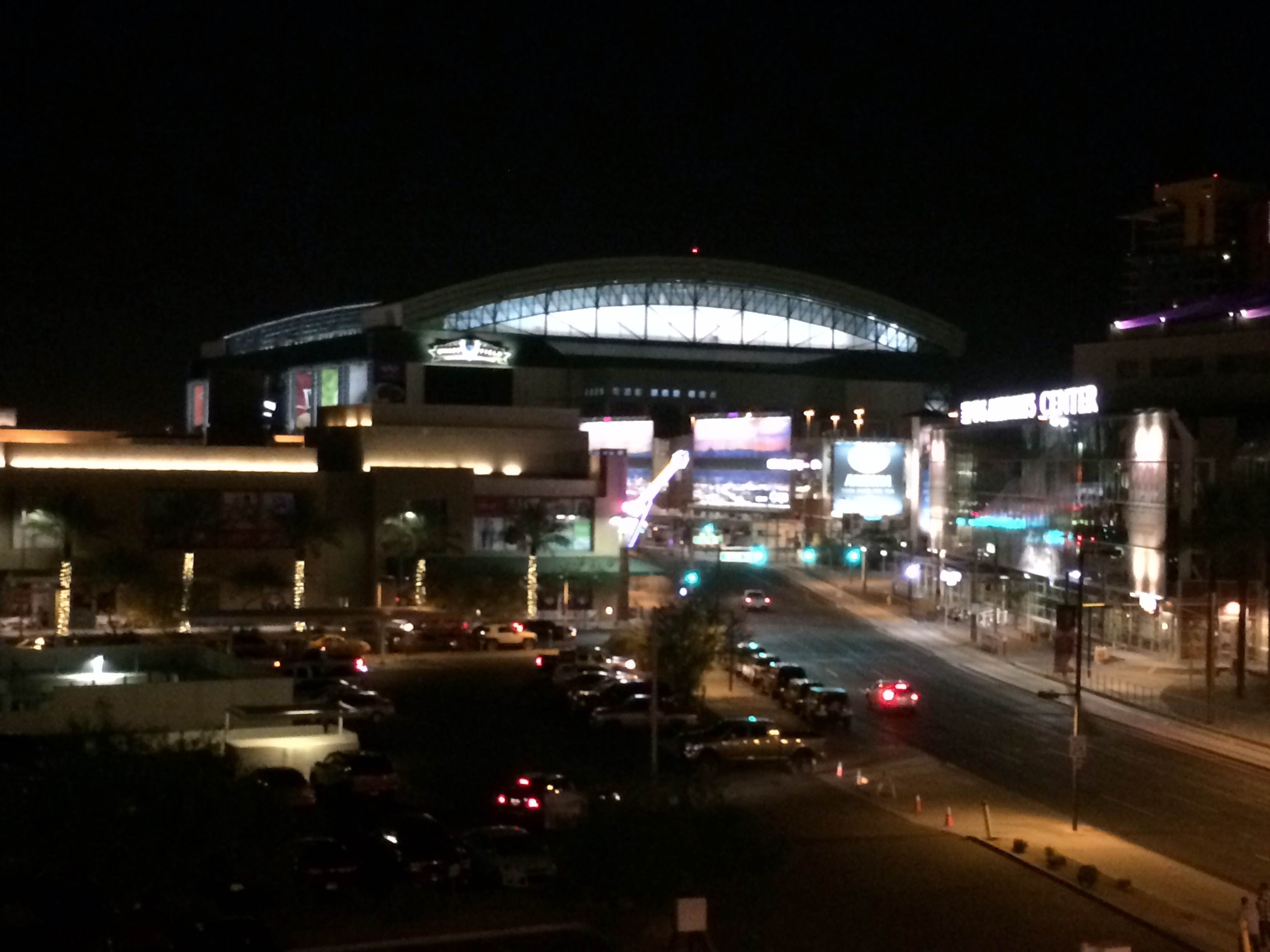 Walking into the park for the first time you will know you have walked into a different experience than you may be used to. The Diamondbacks call it the “most unique venue in baseball.” I’ve been to my fair share of ballparks, and I would say that this one is certainly in the running. The building itself is mostly shaped like a rectangle, with an arched roof that opens in both directions. There is very little seating in fair territory. Sitting behind home plate, you look directly at one of the two longer walls of the rectangle.

A large section of this wall also opens up in sections called the panels that provide a little more open-air feeling. During the three night games of the series, the roof was opened right around first pitch. With the sun down and some residual conditioned air, it was still comfortable in spite of temperatures well into the 90s. During Sunday’s daytime matchup the roof remained closed, thankfully, as the temperature outside was around 106 degrees for most of the game.

Chase Field has many of the standard features you would expect to find in a modern ballpark. There are two restaurants, “The Sandlot” children’s play area and the Coors Light Strike Zone, a party deck similar to the Pilot House at GABP. In addition, the most unique feature is the hot tub/swimming pool, which can be rented out by your group or used as a place toÃ‚Â relieve yourself after you clinch the NL West. 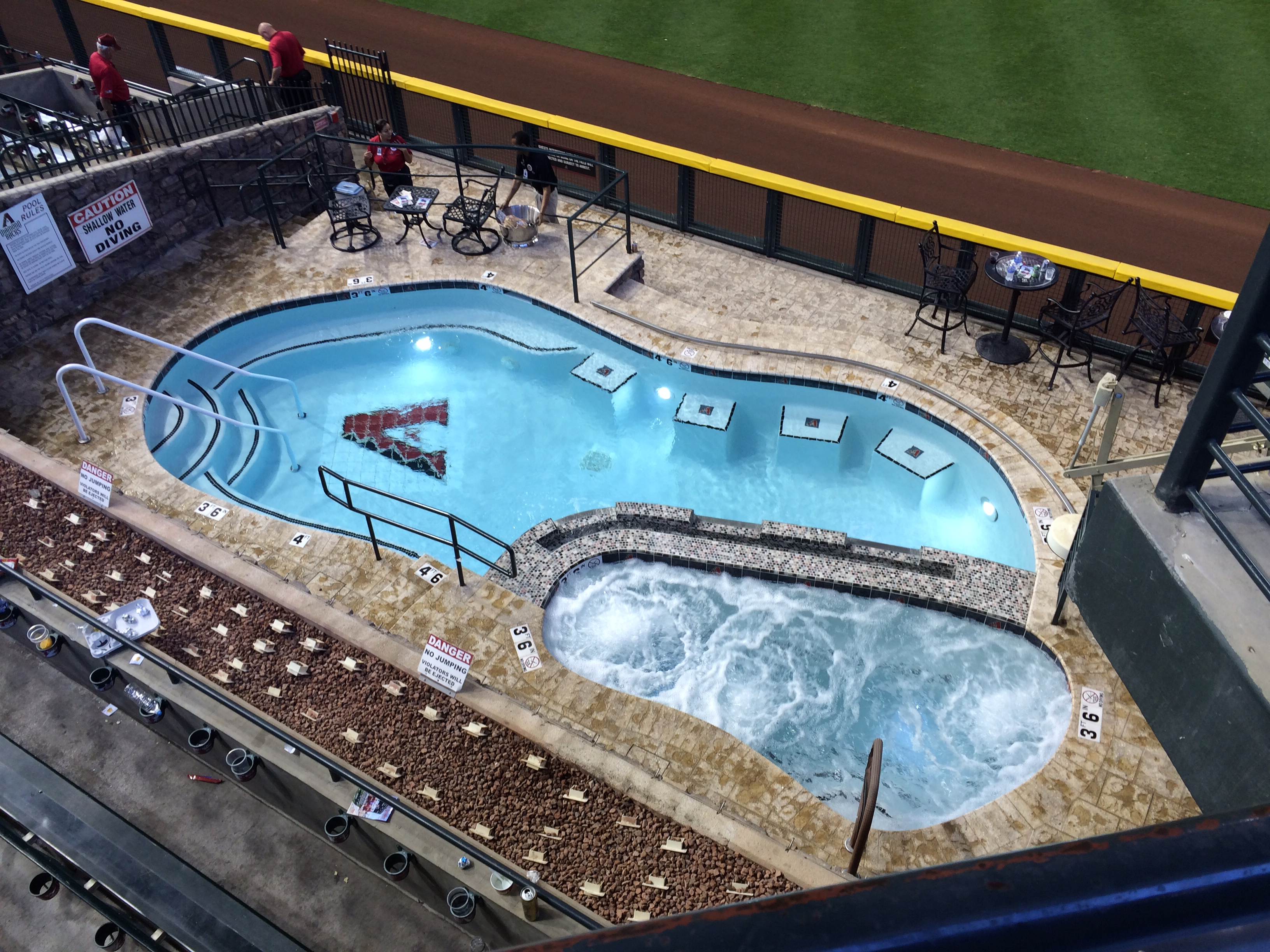 One oddity that made me chuckle was the scoreboard images. When the visiting team bats, they display the standard headshot of the batter in front of a few different backgrounds from their city that rotate throughout the game. There’s a picture of GABP, one of downtown Cincinnati, one of a riverboat, and my favorite, the Skyline Chili logo. Someone on the D-Backs video team must be a Cincinnati native!

For Thursday’s game, I sat in the upper level behind home plate. There was an “expert” D-Backs fan behind me who told his son that the Reds had a strong offense and would likely blow out the Diamondbacks. Well, I should have taken that statement as a sign to just leave and head home. Of course, this fine blog has had more than enough to say about that game, so I don’t think I will go into more detail other than to say it was miserable. About the only thing that saved it for me was a text message from a friend watching at home to tell me about the historical nature of the loss.

Unfortunately, I could not attend Friday’s game, which was a shame as I’ve always been a fan of Bronson Arroyo. I’ve made it a point to tune in to a few other games of his this year and was fortunately able to catch this one on Fox Sports Arizona at home. 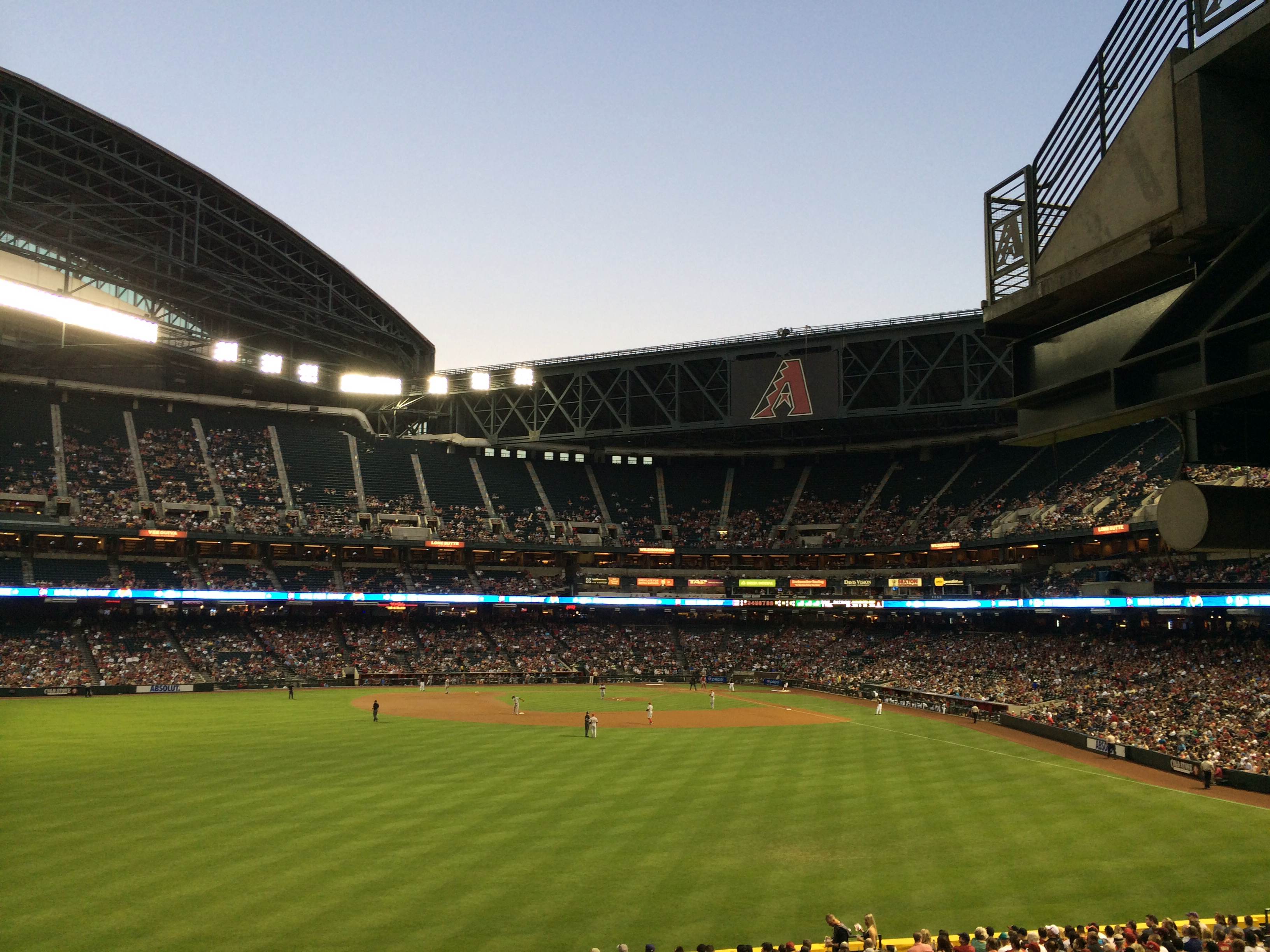 Saturday, my wife accompanied me to the game. Being a U.C. College of Law alum, she got us tickets with the Phoenix University of Cincinnati Alumni group (I was told there were some Buckeyes there as well) in the aforementioned Coors Light Strike Zone.

Having my wife there to share afforded meÃ‚Â the opportunity to order the infamous D-Bat corn dog. In case you are not familiar with it, the D-Bat is an 18-inch corn dog stuffed with cheese, jalapeÃƒÂ±os and bacon. It cost $25 dollars and was worth every penny. I ordered this monstrosity at the only concession that offers it, near sectionÃ‚Â 132. The cashier took my order and asked me if I needed anything else. “No, I’m fine,” I assured him. I then walked back to the Strike Zone carrying this thing. Never in my life have I had such an experience. The crowd parted ways for me, as if I was a monarch or maybe the pope. I will say that it was pretty tasty, and I only felt like I was going to die for a couple of hours afterward. 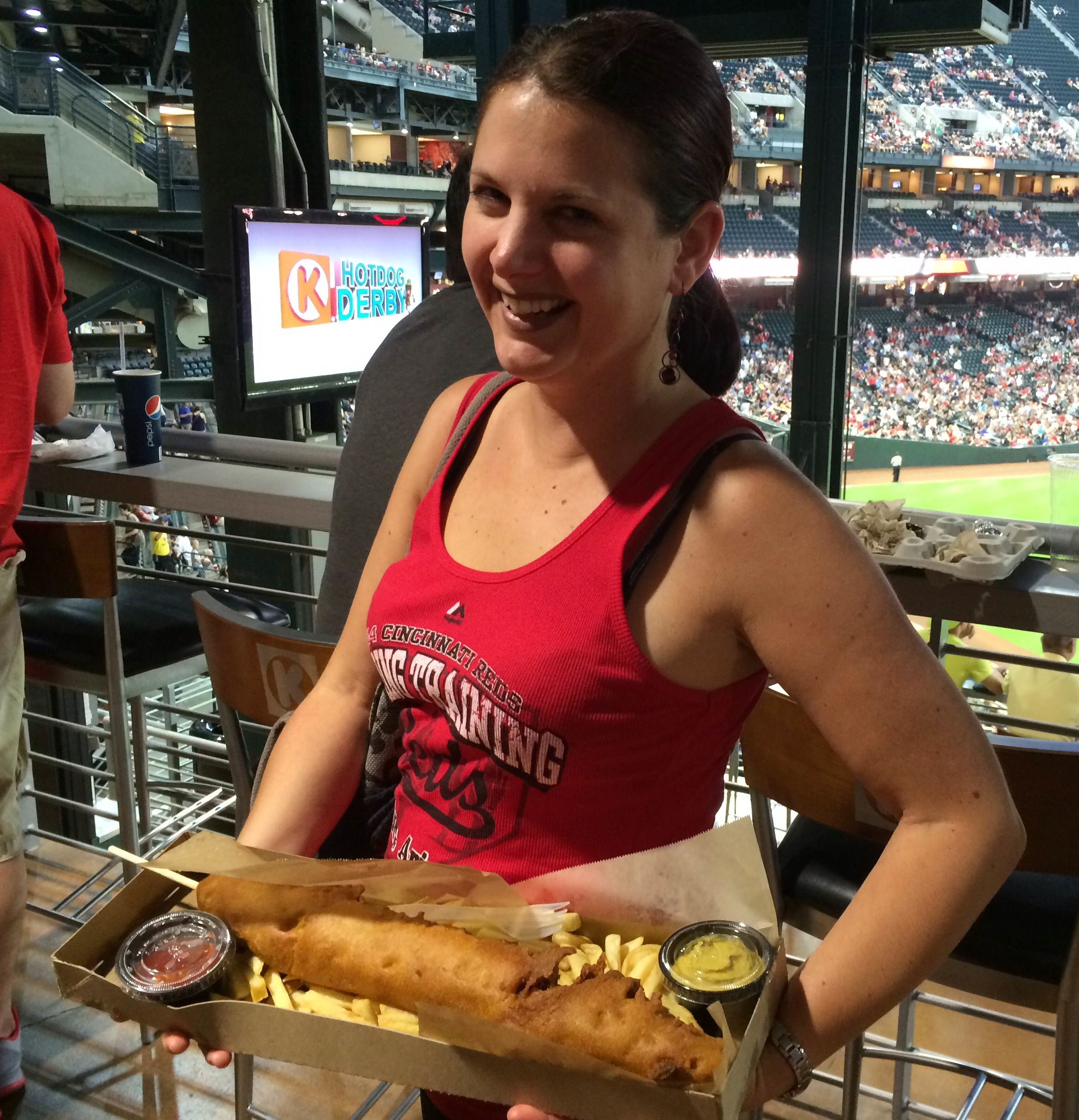 Of course, the game was powered by Johnny Cueto, who looked as dominating in person as he does on television.

Sunday, I ventured again to the ballpark solo to attend the finale. Again, I had a seat in friendly territory, this time behind the Reds dugout on the lower level. Phoenix and the rest of the Valley of the Sun is a community of transplants, and most fans support aÃ‚Â team other than the Diamondbacks. Needless to say, there were plenty of Reds fans at every game, and especially in this part of the ballpark. D-Backs fans seem to be pretty used to this, and it is definitely a friendly place toÃ‚Â see a game as a visiting fan. Overall everyone seemed relatively quiet throughout the game, with the exceptions of Reds fans cheering as the offense had a GABP-like home run derby and D-Backs fans enjoying the ridiculous Mes/PeÃƒÂ±a TOOTBLAN. 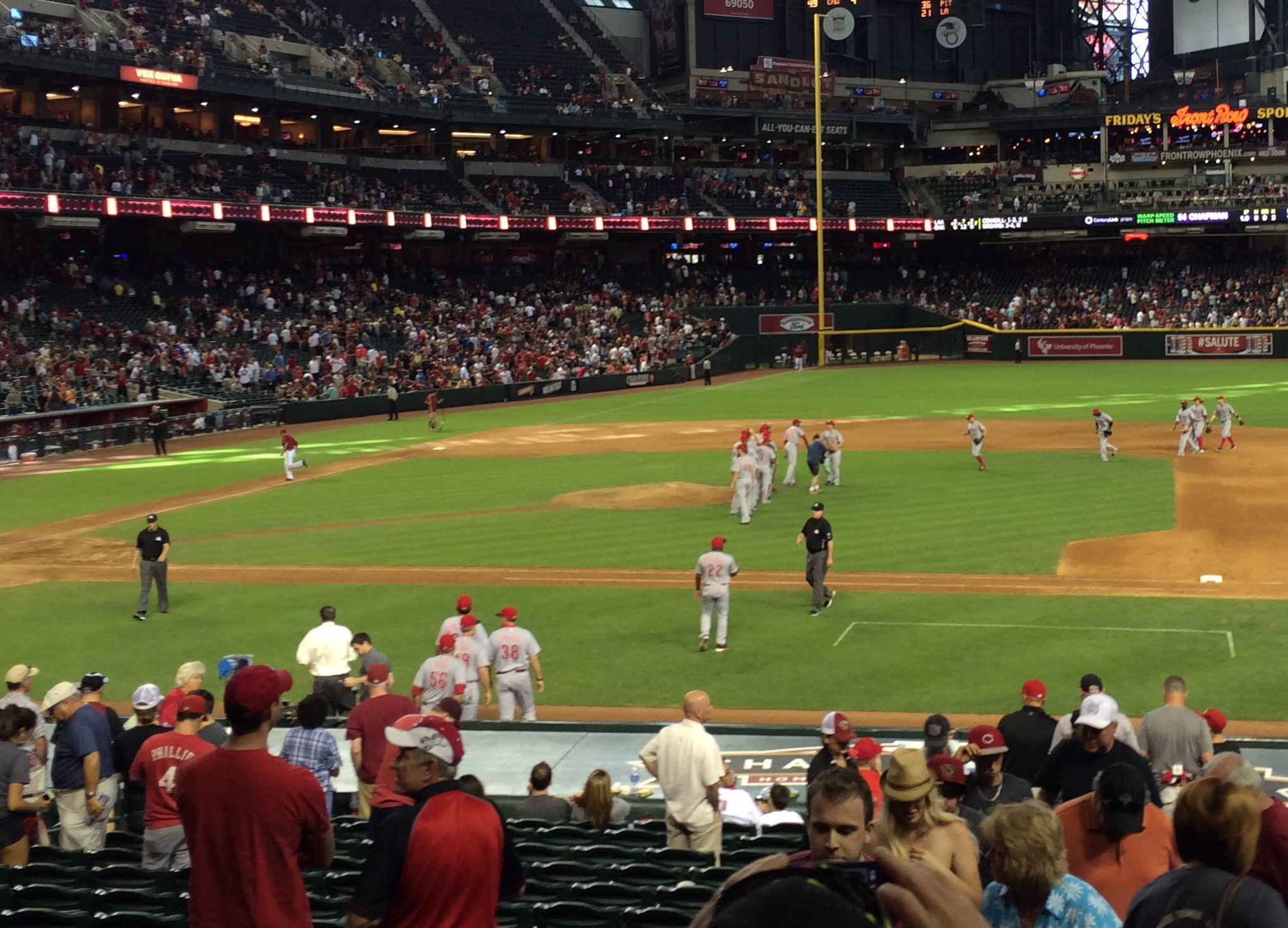 All in all, it was nice to have a little taste of Reds baseball in the desert once again. More importantly, it was nice to have a D-Backs team that the 2014 Reds were capable of beating up on a little bit (we’ll ignore game 1). Thanks to Redleg Nation for giving me the chance to write this post! I hope you enjoyed it. Ã‚Â And if you ever find yourself craving a Reds-related road trip, you will have a nice time in Arizona, whether it’s for spring training or a summertime regular season game. Ã‚Â Remember, it’s a dry heat!