Cueto was terrific yet again. Ã‚Â His ERA dropped down to 1.68, which is now tied with Jeff Samardzija for the best in the MLB. Ã‚Â He also leads the MLB in WHIP at 0.76.

Tonight was the 10th time this season, Cueto has gone 7.0+ innings and allowed less than 2 earned runs. Ã‚Â There is no other pitcher in the MLB who made 8 or more such starts.

One of the biggest reasons for Johnny Cueto’s success has been domination from the beginning of the game. Ã‚Â Through 12 starts this season, Cueto has only allowed 4 ER inÃ‚Â innings 1-4 (0.75 ERA).

The Reds offense has scored 5+ runs in back to back games for the first time since April 20-21.

Despite that the top of the Reds order tonight of Hamilton, Schumaker, and Phillips entered the game with OBP of .287, .292, and .295, they came through tonight. Ã‚Â They combined for 6 hits, and scored all 5 of the Reds runs.

J.J. Hoover pitched a scoreless ninth inning tonight. Ã‚Â On May 10th against the Rockies, Hoover gave up two home runs to the Rockies in the 6th inning and was booed heavily at GABP. Ã‚Â Price had Hoover got back out and pitch the 7th inning of the blowout game, and he pitched a perfect inning. Ã‚Â Here are Hoover’s numbers since Price made Hoover go back out for another inning after being booed off the field: 12.0 IP, 5 H, 1 R, 5 BB, 13 K, 0.75 ERA.

Devin Mesoraco was not in the lineup tonight.

Donald Lutz got the start at 1B tonight, and went 0 for 4.

Not so random thoughts….

How nice would a win be tomorrow? Ã‚Â The Reds now sit just 3.5 games out of a wild card spot. Ã‚Â Taking 3 of 4 from Arizona, before having an off-day on Monday, and beginning a 10-game homestand on Tuesday could go a long way.

Man, when Billy Hamilton gets on base it is a thing of beauty. Ã‚Â He had two hits tonight and stole a base. Ã‚Â While I still don’t believe that Billy should be hitting leadoff at this point in his career, if he could raise his OBP up near .350, he could be a very nice leadoff hitter. 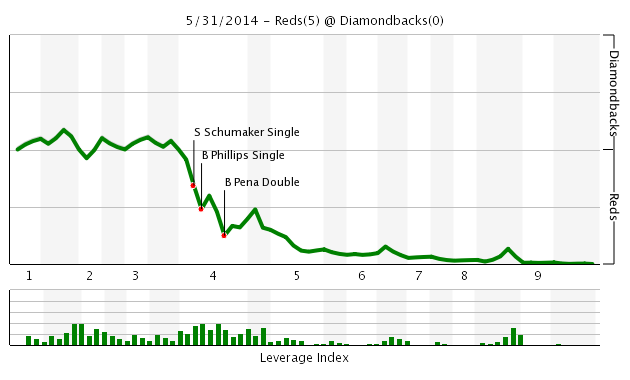 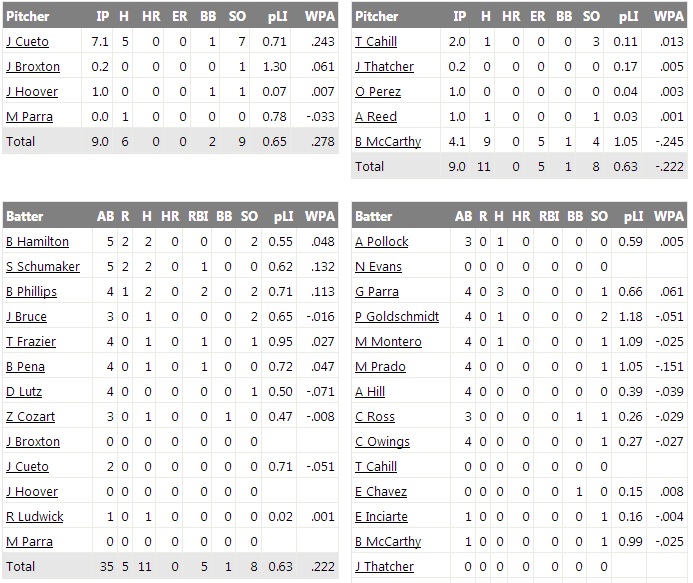