The cricket writer Henry Chadwick saw baseball being played on the Elysian Fields of Hoboken, New Jersey in 1856 and was smitten. Widely considered the Father of Baseball, Chadwick was perhaps the first to evaluate players using numbers. He designed the score sheet we are familiar with today. HeÃ‚Â invented the box score as we know it. ERA and AVG were his ideas. That “K” you mark down in your scorebook or hang in the outfield? His idea. Long before the Baseball Encyclopedia, the Elias Sports Bureau or even Bill James, there was Henry Chadwick. What would Henry think ofÃ‚Â theÃ‚Â crush of numbers on the horizon of Baseball now? Good lord.

ItÃ¢â‚¬â„¢s coming to a ballpark down by the river near you, Cincinnati. It will change the game like nothing else since the dead ball era gave way to the lively ball, Jackie Robinson and the end of the Reserve Clause. It will SEE ALL andÃ‚Â TELL ALLÃ‚Â about nearly everything that happens on the diamond that doesnÃ¢â‚¬â„¢t fall under those ephemeral categories of GRIT or THE WILL TO WIN. Get ready for MLB Advanced Media Tracking Technology.

Sabermetrics on steroids, if you will. Some folks will hate it. Others will fall in love with it. But, it’s coming, like a fiber-optic freight train of sorts. And what it portends is merely the next evolution of advanced metrics. Not an eye in the sky per se, but rather thousands of eyes that see virtually everythingÃ¢â‚¬â€and never blink.

The game is already being observedÃ‚Â as never before. The advanced metrics we are just beginning to get comfortable with have always been somewhat linear in natureÃ¢â‚¬â€result-driven. Now, they will be looked at anew in three dimensions, using Doppler radar and high-speed cameras. Today, when we talk about on base percentage (OPB) or Swinging Strike Percentage (SwStr%), we areÃ‚Â usually discussing the rate at which an event occurred. Now, we will begin to see WHY it occurred and precisely how other actors in these events affected the resultÃ¢â‚¬â€in real time.

For example, the new tracking technology will not only reveal the EXIT VELOCITY of the ball off a bat, it will tell us the PITCH VELOCITY and PERCEIVED VELOCITY, how that affected the exit velocity, thus helping provide an explanation of why a shortstop did or didnÃ¢â‚¬â„¢t get to the same ball he got to yesterday.

YouÃ¢â‚¬â„¢ll know the CATCH-AND-RELEASEÃ‚Â time from Brandon PhillipsÃ¢â‚¬â„¢ glove as he shovels the ball to Zack Cozart to start the double play. Want to know the exact lead Billy Hamilton has off first base in the third inning? Got that. His MAX SPEED as he approaches second and the POP-UPÃ‚Â time for the catcher as he rises to foolishly attempt to nail Billy? Got that, too. 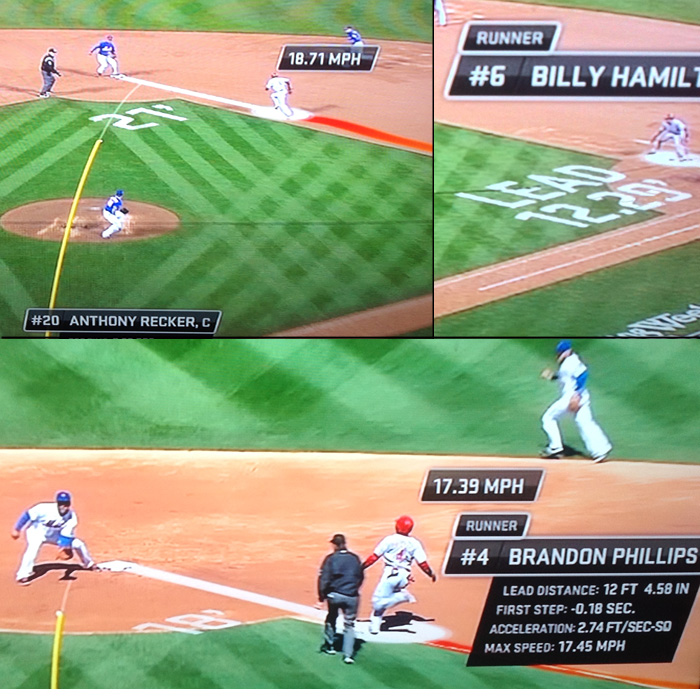 The new tracking technology is already in place at Citi Field in New York, Miller Park in Milwaukee and Target Field in Minneapolis. Next year, it will be in all 30 parks, providing real time stats not just to the experts, but also to fans. For front offices, it will change how they evaluate players:

“When you look at how scouting has been done in the past, there’s a lot of subjectivity to the evaluation,” he said. “Some guys I have found have varied, from scout to scout, in terms of their opinion of each player. There is a lot of quality defensive statistics out there, but they’re not completely accurate. A lot of them are dependent on somebody charting, whether it’s UZR or DIPS or Defensive Runs Saved, and they can only go so far. Some players . . . range to their left better, some range better to their right, some come in on ground balls better than others, some have better first-step quickness.

“The exciting thing about this new technology is, you can start to take the subjectivity that is given to you by the scout and blend it with raw data now, and come up with a truer picture of evaluating a player.Ã‚Â  Ã¢â‚¬â€ Jim Duquette, former MLB GM

For those that covetÃ‚Â more information, it will be Christmas 162 times a year.

Using traditional advanced metrics (now thereÃ¢â‚¬â„¢s a unusual company of words), weÃ¢â‚¬â„¢ve been able to stitch together 100+ years into a singular tapestry we can unfurl and examine. Now, that tapestry will be replaced by a three-dimensional rendering of a real game we can pause, then view from any angle of our choosing, panning the infield dirt like an old prospectorÃ¢â‚¬â€sifting for metric gold.

From the MUFFED THROW stat in newspapers in the late 19th century to the soon-to-be ubiquitous VECTOR and ROUTE EFFICIENCY stats that will evaluate the throw Jay Bruce will make to nail the runner trying to go from first to third, understanding the game has changed in unimaginable ways, even as the bases are still 90 feet apart and peanuts and Cracker Jack continue to be hawked up and down the aisles of Section 124.

In the last scene of the baseball screenplay I will never write, Henry Chadwick will sit in that same Section 124 keeping score with a pencil and a small parchment booklet, his woolen coat and hoary white beard protecting him from the harsh Opening Day cold. Across the aisle, a young fan swaddled in Gore-Tex and a light polar fleece will look up from the numbers scrolling down the display of his impossibly-thin phone, their eyes will meet and both will silently nod, then turn their gaze to the field as Billy Hamilton dives onto the warning track and the crowd roars.