Last September, the LA Dodgers strode into Cincinnati having won 36 of 46 games after the All-Star break. The Reds themselves began the series with a bit of momentum, having won three out of four at home from the first-place St. Louis Cardinals. The series fell on Joe Morgan weekend that featured the emotional reunion of the Great Eight, including Pete Rose.

All three games of the series were broadcast on national television.

Joey Votto and Mike Leake led the Reds to victory in the first game (box score, RN recap) of the series.Ã‚Â Leake pitched 7 2/3 innings, giving up only five hits and two runs.Ã‚Â Votto, who reached base in all four of his at bats and scored two runs, put the Reds ahead for good with a fifth-inning, two-out, two-run homer after Brandon Phillips had hit into a double play.Ã‚Â Aroldis Chapman struck out the heart of the Dodgers order in the ninth to earn the save, including whiffing fellow Cuban Yasiel Puig on three pitches, the last a 102-mph fastball.

Mat Latos faced Zack Greinke the next night (box score, RN recap) in a game that was decided in extra innings.Ã‚Â Joey Votto reached base in all five of his AB, scoring a run in the first inning. Cesar Izturis, batting second (!) and filling in for an injured Brandon Phillips, was an unlikely hero, with three hits and doubling in Shin-Soo Choo (sigh) with a game-tying double in the seventh.Ã‚Â In extra innings, Zack Cozart made a superb defensive play robbing Andre Ethier of a hit in the tenth inning with a runner on base.Ã‚Â Billy Hamilton played a key role in this Reds win. Pinch running for Ryan Ludwick, Hamilton stole second and scored the game-winning run in the bottom of the tenth on a Todd Frazier single.

The Homer Bailey-Clayton Kershaw series finale (box score, RN recap) represented the high-point of the Reds’ 2013 season.Ã‚Â Jay Bruce hit two home runs off of Kershaw, who was on his way to a second Cy Young award. Bruce’s second-inning homer was the first given up by Kershaw in 58 innings and the first Kershaw had allowed to a left-handed hitter in more than a year.Ã‚Â Homer Bailey retired the first eleven batters he faced, including seven on strikeouts. Bailey pitched seven innings, giving up two runs, no walks and striking out nine.Ã‚Â In the bottom of the ninth, Ryan Hanigan lined a first-pitch double down the left-field line scoring Zack Cozart from first base.

TheÃ‚Â Reds’ sweep of the Dodgers was the first at home since 1992 and produced this picture: 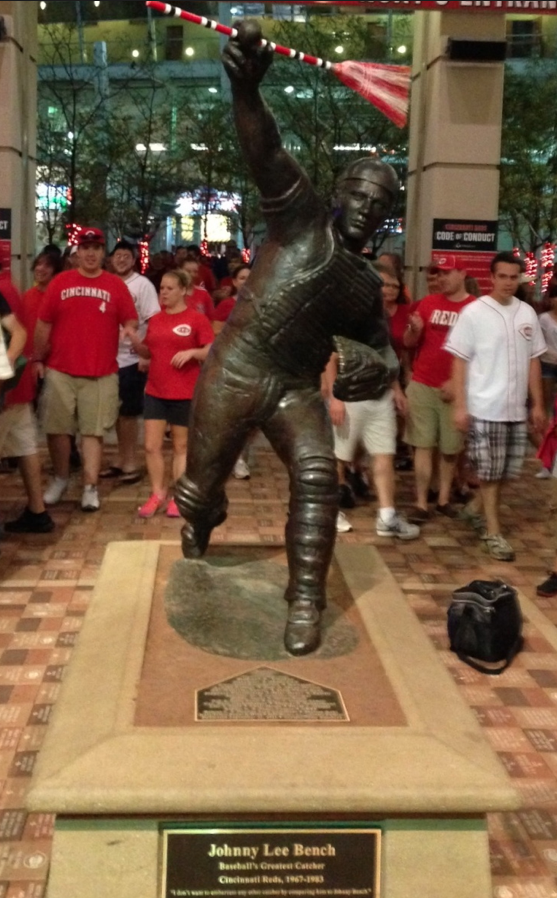