[Edit.: We love publishing accounts of games that members of Redleg Nation attend in ballparks across the country. Loyal member Anna Trainer, who is originally from Cincinnati, was fortunate enough to take in Monday night’s exciting 15-inning victory at Nationals Park in Washington D.C. Anna was trained as a biological anthropologist and has listened to Reds games during excavations! Anna was kind enough to share her recent experience at Nationals Park with us. Thanks, Anna! — SPM]

If playing in an away stadium can be thought of as playing Ã¢â‚¬Å“behind enemy lines,Ã¢â‚¬Â then we can all agree that Monday night the Reds withstood a harrowing 15 inning siege. Luckily, the NationalsÃ¢â‚¬â„¢ stadium is a pretty decent place to be for nearly five hours.

I moved to DC from Ohio a little over two years ago, and have attended nearly all of the Reds games here in the District. The stadium was completed in 2008 and was the first green LEED certified major league sports stadium in the US. The stadium feels new and is a great place to watch a game, with lots of food stands and open areas to congregate and watch.

The area surrounding the stadium, near the Navy Yard, has not always been the best of neighborhoods, and even now there is not much to do there. However, they do have one place that is a must-stop before every game: The Bullpen. 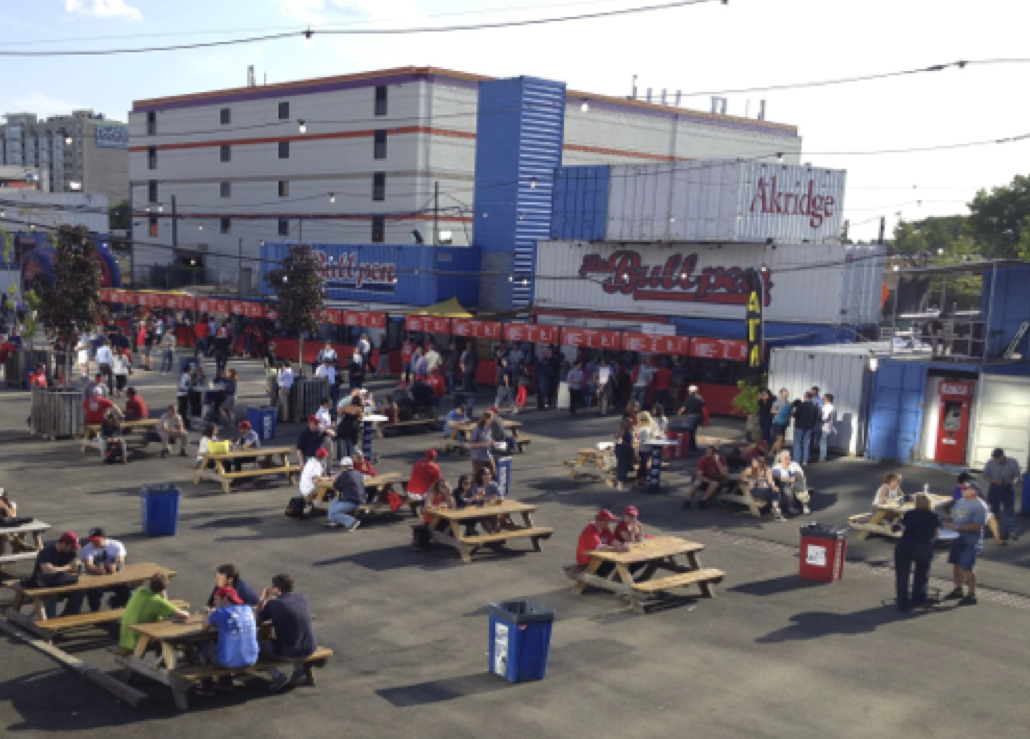 Similar to Cincinnati, the area surrounding the stadium was devoid of eating/drinking options for a long time, even though there was a lot of empty space all around it. At some point, a group of enterprising folks got together, stacked up some unused shipping containers, got some beer and food vendors to set up shop, and The Bullpen was born. ItÃ¢â‚¬â„¢s basically a big area for baseball tailgating, with picnic tables and corn hole boards and is a perfect spot to prepare for the big game.

Monday night was an exceptional night for a ball game. With temperatures right around 70 and no humidity, arriving at The Bullpen about an hour before game time seemed like the right thing to do. I was joined at this game by my boyfriend and his cousin, all of us born and bred on tales of the Big Red Machine and whose earliest Reds memories are of Eric Davis home runs and Barry Larkin diving catches. Oh, and Chris SaboÃ¢â‚¬â„¢s goggles.

Surrounded by the usual assortment of DC Hill workers, with their Bryce Harper jerseys on top of their dress shirts and ties, we had a frosty beverage and then headed into the park. 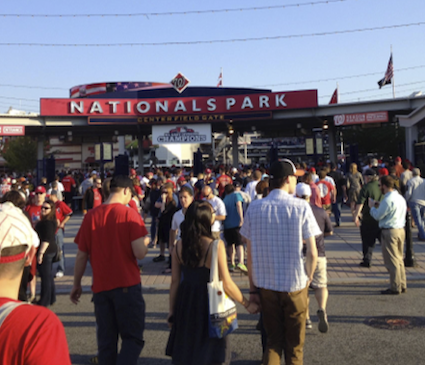 Because of the perfect weather, I was surprised that the stadium never looked more than half full. Nats games were once described to me as Ã¢â‚¬Å“The cityÃ¢â‚¬â„¢s biggest bar with a baseball game in the middleÃ¢â‚¬Â and although that reputation has diminished since the Nats recent success began, it seemed to hold true on Monday night. This could be largely attributed to the long list of injuries on both rosters. For DC, a baseball game without Bryce Harper is like a football game without RG3…barely worth watching!

Our tickets were for one of the first level outfield sections, but we didnÃ¢â‚¬â„¢t sit in them until the 9th inning. Little did we realize that weÃ¢â‚¬â„¢d still have plenty of time to sit there! One of the best things about Nationals Park is that they have an upper deck standing area, similar to the Reds Moon Deck, that is free and open to anyone possessing a ticket. We were able to grab a table near the railing and had an unobstructed view of the game from right around Center Field. 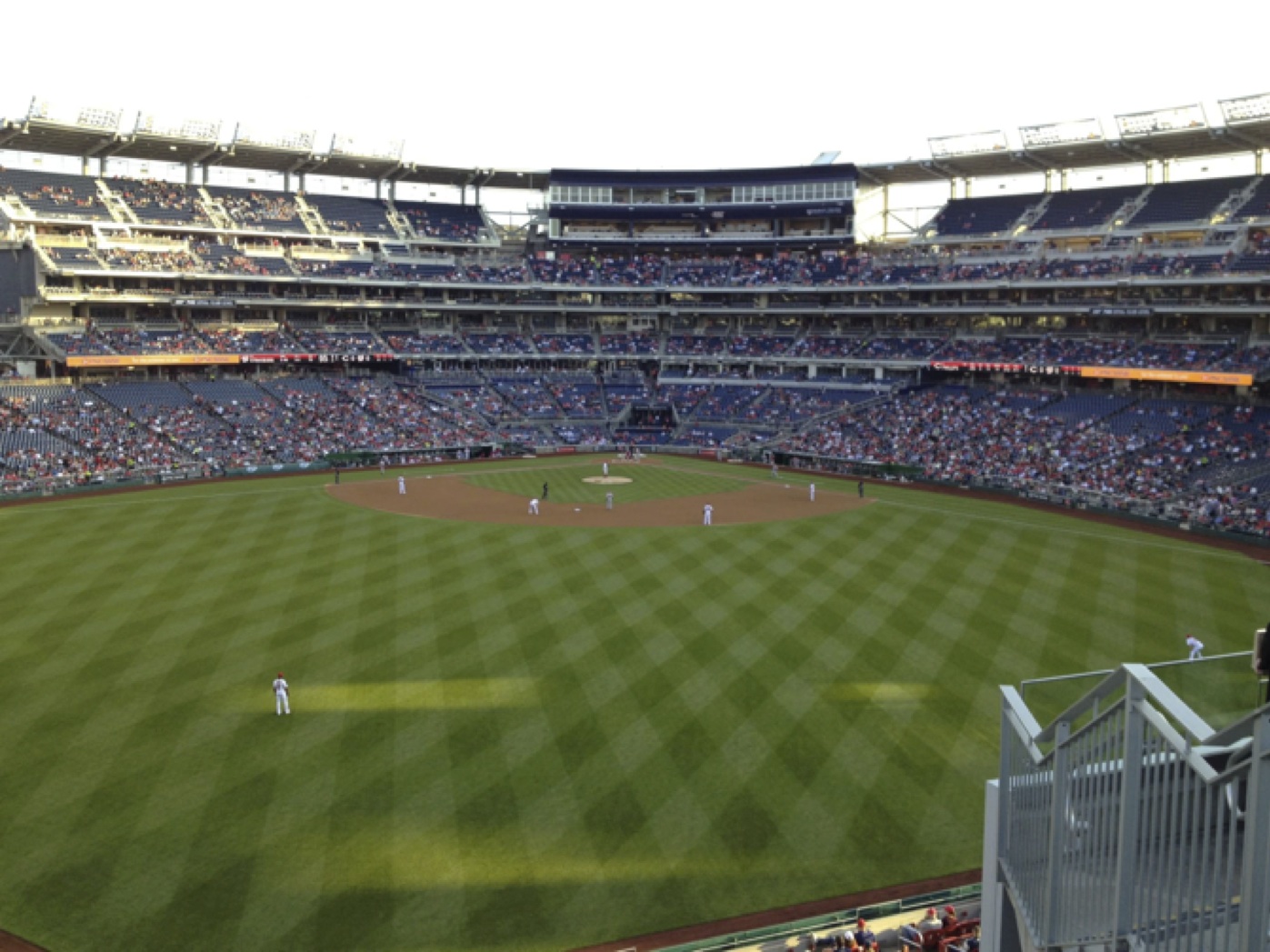 The first twelve or so innings of the game may not have been overly exciting to listen to, as I usually do, but actually getting to attend the game makes every long fly ball and Billy Hamilton break to second very dramatic! The double steal of Brayan PeÃƒÂ±a and Todd Frazier to score the first run had us all yelling our heads off. The weird circumstance where Billy got caught trying to steal home looked really strange live — I didnÃ¢â‚¬â„¢t realize he thought there had been a balk until I read the game recap. Aroldis ChapmanÃ¢â‚¬â„¢s blown save in the 9th felt like a disaster. Overall, it was an eventful game to watch live!

There are unique features of the Nats stadium that you only experience if you are at the games. I always enjoy Jason WerthÃ¢â‚¬â„¢s walk-up music, which in early innings is the Game of Thrones theme song and in later innings ominously becomes the theme from The Walking Dead.

One of the best parts of taking in a game at the NatsÃ¢â‚¬â„¢ stadium is the nightly PresidentÃ¢â‚¬â„¢s Race. The race features an impressive ensemble of mascots — George Washington, Thomas Jefferson, Abraham Lincoln, Teddy Roosevelt, and, new this year, CincinnatiÃ¢â‚¬â„¢s own William Howard Taft. I was personally disappointed that TaftÃ¢â‚¬â„¢s costume didnÃ¢â‚¬â„¢t feature some extra padding. In my experience, Washington almost wins, but on this night Teddy ran out of the stands and body slammed Abraham Lincoln to the ground, resulting in a rare win for the Bull Moose. You could tell it was going to be a strange night when Ã¢â‚¬Å“AbeÃ¢â‚¬Â was clotheslined by Ã¢â‚¬Å“ThomÃ‚Â TomÃ¢â‚¬Â and Ã¢â‚¬Å“GeorgeÃ¢â‚¬Â and a head popped out of his chest, Aliens-style.

One unfortunate aspect of attending a game at Nationals Park is that the game is often cut off early for those of us, like myself, who use public transportation to get to the stadium. The Metro cuts off train service on weeknights at midnight, whether there is an exciting game in extra innings or not. Sure enough, in the top of the 12th inning, they put up a notice on the scoreboard that said, Ã¢â‚¬Å“Last Metro Train Leaves in 20 MinutesÃ¢â‚¬Â! Much to my sadness, this meant that we had to abandon the game early, with the Reds’ fate undecided. We streamed out of the stadium with the majority of the remaining fans, to wait for the last train.

Even riding the last train home is a fun part of the game. Because DC is a city of transplants, I was not surprised to find myself surrounded by as many Reds fans as Nats fans. Although we may have moved far away, itÃ¢â‚¬â„¢s always reassuring to find that the love of Redleg Nation truly does stretch across the nation! We made it home just in time to turn on the MLB radio app and hear Marty announce that this one belonged to the Reds. It was a great night!