Like the Reds, the Nationals have a first-year manager, Matt Williams. Like Bryan Price, Williams had no previous experience before as a skipper, although he did have a long, outstanding career as a Major League player for the San Francisco Giants and Arizona Diamondbacks. Unlike Price, he had not been a successful, long-time coach. Williams has already created doubts and controversy, particularly when he publicly criticized and benched face-of-the-franchise Bryce Harper for a lack of hustle. Especially when Harper is well know for that quality. Williams’ name has already appeared on hot seat lists.

Also like the Reds, the Nationals’ roster has been hit hard by injuries. Three of their best hitters will miss the series due to injury. Left-fielder Bryce Harper is out until July after surgery to repair a torn ligament in his left thumb that he suffered sliding head-first into second base. Third baseman Ryan Zimmerman is waiting for his fractured thumb to heal. First baseman Adam LaRoche is spending time with Joey Votto in the strained quad ward. The Nationals’ starting rotation had remained healthy, but yesterday, they placed LH Gio Gonzalez on the DL and ordered an MRI on his shoulder.

Citing the statistics for the Nationals offense is misleading because they haven’t been without Harper, LaRoche and Zimmerman like they will be this week. They’re ranked from 6-8 in the NL in the offensive categories of runs scored, home runs, OBP, wRC+ and K%. But again, most of the numbers were earned by a considerably different lineup. They scored 13 runs in their three-game series against the Mets this past weekend.

Jayson Werth is the most dangerous hitter in the Nationals current lineup. By now, you should be familiar with the statistic wRC+ (weighted runs created adjusted for park). It measures the offensive contribution of a player independent of what his teammates do. Here are the top ten wRC+ players in MLB from 2013: 1. Miguel Cabrera, 2. Mike Trout, 3. Chris Davis, 4. Jayson Werth, 5. Joey Votto, 6. Paul Goldschmidt, 7. Andrew McCutchen, 8. David Ortiz, 9. Shin-Soo Choo, 10. Freddie Freeman. That’s solid company for Werth. He also plays good defense in right field.

Anthony Rendon is the latest Nationals’ phenom. He’s 23 Ã‚Â years old (which makes him two years older than Bryce Harper) and was chosen by the Nationals with the sixth pick of the 2011 amateur draft. For context, the Reds selected Robert Stephenson 21 picks later. Rendon was a consensus Top-40 prospect in his brief time in the minor leagues. He played third base in college and in his first year in the Nationals’ organization. But with team leader Ryan Zimmerman at that position, the Nationals had Rendon learn how to play second base. When the 2014 season started, Anthony Rendon was the Nationals’ second baseman, but with Zimmerman’s injury, Rendon moved back to third. If you’re starved to read about good young infielders (and you should be), check outÃ‚Â the debate about whether Rendon is better than Bryce Harper.

The key for the stats in the charts:

The Reds will miss Gio Gonzalez (DL) and Jordan Zimmermann in this series.

Mike Leake and Stephen Strasburg are linked beyond this pitching match-up. They left college the same year, 2009. Strasburg was drafted first overall by the Nationals and Leake was taken eighth overall by the Reds. It was Leake, not Strasburg, who was voted the National Player of the Year in his senior year by the American Baseball Coaches Association. It was Leake, not Strasburg, who went right to the Major Leagues after being drafted. Leake has made 117 starts for the Reds and Strasburg 84 for the Nationals.

The two also played together for the San Diego Sting in 1999 (below – Strasburg standing, far left, goofy smile; the miniature Leake standing, fourth from left). Strasburg was a pitcher and Leake, believe it or not was his catcher (Hmm, catcher … emergency catcher. Does anyone doubt that Mike Leake could be the emergency catcher for the Reds and possibly out-hit Neftali Soto?) 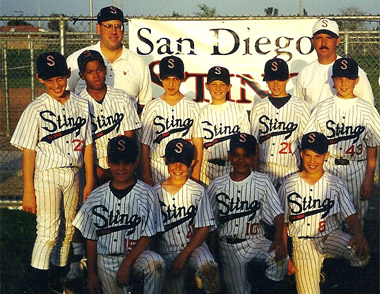 A match-up between Stephen Strasburg and Johnny Cueto, would have been must-drool television. Strasburg is one of the few pitchers who has had a comparable start to the 2014 season as Cueto. Strasburg leads Cueto in FIP, SIERA, strikeout-rate and walk-rate among other stats. If both pitchers stay healthy, Strasburg and Cueto will be top-tier competitors for the NL Cy Young award.

You probably last saw Doug Fister pitching for the Detroit Tigers inÃ‚Â the 2013 ALCS, dominating the soon-to-be World Series Champion Boston Red Sox. In a trade that surprised most analysts, the Tigers sent Fister to the Nationals in the off-season. Fister is not eligible for free agency until 2016. He started the year on the Disabled List suffering from a lat strain and has made only two starts in 2014, a poor debut against Oakland and a strong outing against the Diamondbacks. Tuesday night’s start will be his first at a member of the Nationals in Washington D.C. (None of his numbers in the above chart are highlighted due to the extremely small sample size. You should ignore them.)

You already know about Johnny Cueto’s exploits in 2014, as increasingly does the rest of the country. I’ve read he’s a pitcher of stature.

27-year-oldÃ‚Â Tanner RoarkÃ‚Â shares an accomplishment with Johnny Cueto. He also pitched a three-hit shutout against the San Deigo Padres this year. Roark is in his second season for the Nationals, having made five starts last year. Think of him as their Mike Leake – a solid fourth or fifth starter. He’s stingy with walks and league-average with strikeouts. None of his numbers are highlighted in the above chart because he’s decidedly middle-of-the-pack.

Alfredo Simon had a strong bounce-back game on Friday against the Phillies after being rocked by Colorado in his previous start. The underlying numbers (K%, BABIP, strand-rate), however, scream that of the two, more starts similar to the one against the Rockies are in his future. But Simon has continued to defy the odds as he replaces Mat Latos. Let’s hope he makes it all the way until Latos returns, possibly in early June, before the Law of Averages clock strikes twelve.

The Nationals bullpen has been a strength in 2014. They rank second in the NL in ERA, fourth in FIP and seventh in SIERA.

Their closer remains Rafael Soriano, who has converted 9 of 10 save opportunities. Their set-up pitchers are familiar to Reds fans. Tyler Clippard, Drew Storen and Craig Stammen are solid from the right side. And I just realized it’s not important who their LOOGYs are because Votto and Bruce are on the disabled list. (Sobbing.)

As I wrote last night, despiteÃ‚Â every stinkinÃ¢â‚¬â„¢ thing that has gone wrong for the Cincinnati Reds this year, they are only 3.5 games Ã¢â‚¬â€œ one good week Ã¢â‚¬â€œ behind the second Wild Card team in the National League.Ã‚Â And that team just happens to be the Washington Nationals.