I had never been. All the years, with Fenway only an afternoon jaunt away, I had stayed away. I had read John Updike’s famous New Yorker piece, Hub Fans Bid Kid Adieu and its breathtaking opening paragraph:

“Fenway Park, in Boston, is a lyric little bandbox of a ballpark. Everything is painted green and seems in curiously sharp focus, like the inside of an old-fashioned peeping-type Easter egg. It was built in 1912 and rebuilt in 1934, and offers, as do most Boston artifacts, a compromise between Man’s Euclidean determinations and Nature’s beguiling irregularities. Its right field is one of the deepest in the American League, while its left field is the shortest; the high left-field wall, three hundred and fifteen feet from home plate along the foul line, virtually thrusts its surface at right-handed hitters.”

Could seeing the ballpark actually top that opening salvo of a description by Updike? Could anyone be anything but disappointed in brick and mortar reality after reading that? So, I bided my time, waiting for the perfect moment. And now, the moment had arrived. This was to be a rare confluence of Baseball’s oldest team and Baseball’s oldest park.

The 210 mile drive up though New York on I-95, across Connecticut and up the New England corridor was forgettable, save for a large motel sign along the highway beseeching drivers with a large, alluring indoor pool and words across the top that read: YOUR WIFE IS HOT.

I arrive in Boston with time to kill. So I scope out the first watering hole I can locate near Fenway, like Hunter Thompson on a quest.

Meet Jeff and Kevin. Father and son from Indiana. Father from Muncie. Son from the outskirts of Indianapolis. They sit near me at the bar of an eatery across the street from Fenway, which claims the honor of being voted the best baseball bar in the nation by ESPN. 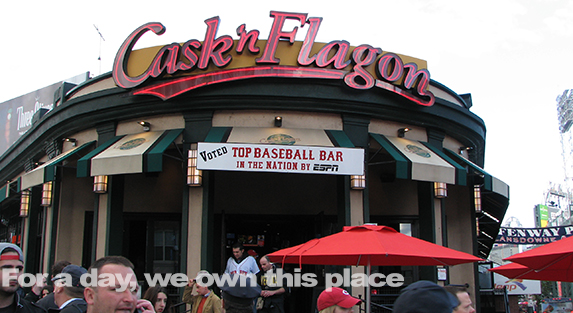 Is there anything the Worldwide Leader doesn’t know or doesn’t rank?

I walk into Cask ‘n Flagon and am immediately struck by the number of Reds fans occupying bar stools and nearby tables. By my unofficial headcount, they seem to outnumber the Red Sox fans and if not, they are surely a mere hanging chad from being in the majority. Sitting to my right, Bob from Rhode Island tells me he is a longtime Reds fan although he isn’t wearing a stitch identifying him as such, fearful that he will stick out as the only Reds fan there. After surveying the room, he’s dumbfounded. You see, Bob’s brother is a lifelong Red Sox fan, so both he and Bob are regulars at the best baseball bar in America. Bob has never seen another Red Sox opponent turn out so many fans in the place. Even Yankee fans, a mere three plus hours down the road, never show up in the kind of numbers as Reds fans have today.

I head down the rear side of the ballpark, the Monster revealing its enormous backside, mooning me. Underneath and to the left is a welcoming sight: the Monster Bar. I file this information away for later use.

I round the corner onto Lansdowne Street and all of a sudden I see a familiar face: 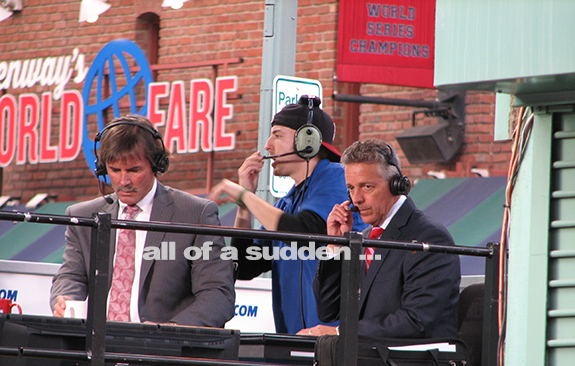 There are statues immortalizing the past, banners celebrating Red Sox greats:

Now, it’s on to Yawkey Way and the carnival. Interestingly, the turnstiles are located literally in the middle of the street here, giving the entrance to the physical ballpark itself a distinctly open-air festival feel. A man on stilts having a catch with onlookers. Not bad for a Tuesday night.

I enter the concourse and it’s as I’d hoped: a perfect blend of today’s modern amenities with little sacrifice of the past. The support beams, positioned every few feet, are all painted that fresh omnipotent Fenway green. They stand like sentinels, holding up the brick edifice. The signage cleverly recalls past decades, its old timey fonts beckoning the eyes, resting comfortably side-by-side with new technology. Even the small Jimmy Fund collection boxes, periodically attached to the supports have a simple, yesterday feel to them, like the tin boxes that collected bottle caps on the old Coca-Cola machines of my youth in Newport, Kentucky.

Meet Sue and Ed, comfortably sitting down the first base line. Ed was a Cincinnati area resident many years ago and Sue is from Albany, New York. Now retired, they are attempting to visit as many ballparks as they can. Since this was Sue’s first time at Fenway, I was curious as to her first impression.

“The seats are too small.”

I laugh at this oft-quoted complaint about the ballpark at the corner of Van Ness St and Yawkey Way. For this lady, it’s all about comfort.

Farther out in right field, another patron from Albany, New York was once sitting in Section 42, Row 37, Seat 21 on June 9, 1946, when Ted Williams hit the longest home run ever struck at Fenway, sending an offering from Detroit pitcher Frederick Charles Hutchinson, yes, THAT Fred Hutchinson, 502 feet into the right field seats, its landing spot forever marked by a red seat

Robbie was already having himself a fine day, when I spied his father taking his picture sitting in the iconic seat. I asked if I could snap a picture of Robbie for myself and maybe mention him later on a rival baseball blog. The moment memorialized, his father said, “thank the man, Robbie.”

Robbie dutifully rose from the seat, walked over to me and stretched out his small hand, even as he eyed me with suspicion, my home white Reds jersey and cream-colored 1958 Mitchell & Ness Vada Pinson throwback hat clearly taunting the young and fiercely loyal Red Sox fan.

Robbie nodded, solemnly, acknowledging the seriousness of the transgression he was taking part in, collaborating with this highly dubious dude wearing decidedly the wrong team gear.

Another nod. And just like that, father and son were gone.

Around the park I strolled, still taking in the staggering number of folks wearing Pantone 200 Cincinnati red, a color that looks mighty fine against the green of the Monster in left field. The Green Monster looms over everything, 37 feet of history, refusing to yield the stage to any other part of the park, including Pesky’s Pole and the aforementioned Williams seat.

Rounding third and heading for my seat behind home plate, I see the damnedest sight yet: a man wearing a Louisville Bats jersey with the name “Frazier” stitched across the back.

Wayne has been following Todd Frazier since he first saw him play in Williamsport in the Little League World Series, where he was the winning pitcher, going 4 for4 with a lead off home run. He has followed him from Junior Pee-Wee National Champion, to Toms River South High School, to Rutgers University, where Todd was Big East Player of the Year for 2007. Wayne has just been speaking with Todd because both are now friends. In fact, according to Wayne, the entire Frazier family have kind of adopted him. There seems to be a heavy family presence at the game tonight. There is Charlie, Todd’s father, holding court, seeming to know everyone within the sweep of his gaze. Todd is the youngest of three baseball-playing brothers, the middle brother having once played for the Detroit Tigers. Wayne points out the spot where brother Jeff once tattooed the Monster with a line drive.

“You have to knock one higher up on the wall above Jeff’s , Todd.”

According to Wayne, Todd has every intention of doing just that. And, OBTW, that Bats jersey is game-worn, given to him by Todd himself. Says Wayne:

“Todd’s a leader. He’s been a leader everywhere he’s been. He’s going to be the leader in the Reds clubhouse, too, someday.”

I finally settle into my seat. On either side of me are two older couples. The wives sit on either side of me, both, well–how can I put this–more than amply filling the small Fenway seats Sue so presciently warned me about only an hour earlier. I’m feeling squeezed. The lady on my right is digging into eight dollar and fifty cents worth of New England clam chowder. Comfort food in a cardboard cup. Fenway’s answer to Skyline Chili.

Behind me sits a gentleman with a distinctive New York accent. He educates his companion on the subject of Joey Votto.

Oh boy. This is going to be a fun night.

On the mound stands Homer. According to Kevin, my new friend from Cask ‘n Flagon, Homer was taking a tour of Fenway earlier that morning, camera in tow, just like any other fan, snapping pictures and slipping inside the scoreboard behind the Green Monster. But now is no time for sight-seeing as Bailey stands on the bump. I ask New York Guy about the opposing pitcher, Felix Doubront. NY Guy leans over, quietly, “Well, I can’t say this too loud, but I’m a Yankee fan.”

“Well, I can still hear you,” volunteers the lady to my left, not Clam Chowder Lady, who is seated on my right. The woman on my left is clearly serious about the Sox in that way that makes you think she might have been an extra in that Jimmy Fallon movie.

She spits his last name out like a toddler rejecting an unwanted piece of broccoli.

“Doubront. He can be okay one game, but the next, he’ll give up all kinds of runs.”

Bailey seems to struggle with the top of the Red Sox lineup, but each time he gets past the first four hitters, he looks as if he could somehow muster a solid game. The Reds make a push late, and when Tucker Barnhart hits one high and deep into the right field night sky, the air is momentarily sucked out of old Fenway. For the first time this evening, the crowd, supremely confident all night the Sox will carry the day–are suddenly given pause. I rise from my seat for the first time in the game, leaving Fever Pitch Lady and Clam Chowder Lady stuck in their seats. But, the ball finds the right fielder’s glove and I briefly flash back to the great Dwight Evans catch in the same part of the ballpark back in October of 1975.

Oh, yeah. Almost forgot. Sweet Caroline plays in the 8th inning, the crowd singing lustily along, a Sox fan behind me good-naturedly serenading me:

The game heads into extras. The obligatory obnoxious fan is screaming at Zack in the 11th.

When Ortiz singles in the 12th, NY Guy and I second-guess Farrell’s decision not to pinch run for the lumbering DH, who surely is not going to get around the bases in a hurry should the need arise. A few moments later, it’s a moot point, as Grady Sizemore of all people, drives a ball into the artificial ballpark gloaming, ending all hope.

With all the speed of Big Papi, I’m outside Fenway now, heading around to the back. To the Bleacher Bar. 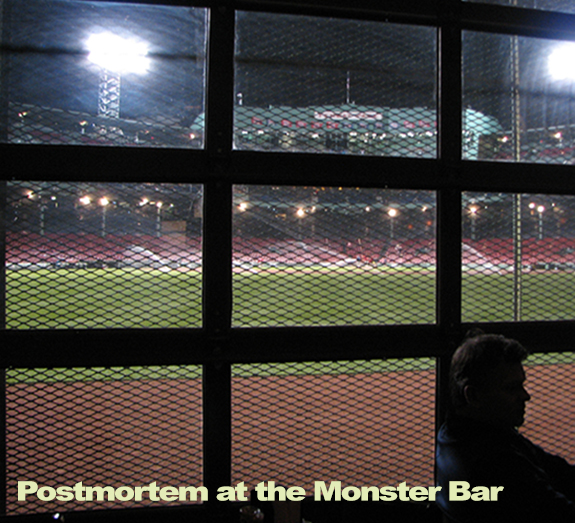 I sit near the window, inches from the warning track, a beer in one hand, looking out over the expanse of outfield green, out and up to the iconic Fenway press box, hovering paternally above it all. It’s 11:50 pm. I have a three and one half hour drive back to New York ahead of me. And yet I linger, watching the sprinklers twirl and the ballpark rest, stuck in the moment.

And for a split second, I don’t care if I ever get back.