Last week, the question was asked in the comments whether we could, perhaps, expect a hitter of Joey Votto’s caliber to decline in a way that was different than the norm. I thought this was an interesting question, so I did some actual data entry. Data entry is boring, so I hope you appreciate me.

Because I was interested in power, I looked only at Isolated Power (ISO). Looking at WAR or wRC+ would account for elements of the game that have nothing to do with power. In order to find comparable players, I took a sample of all players whose age 24-28 seasons (peak years) had an ISO within 10 points of Joey Votto’s ISO in his age 24-28 seasons. As Joey Votto’s ISO for those years was .237, I am taking all players whose ISOs ranged from .227 to .247. I excluded currently active players who haven’t played a full year beyond their age-28 seasons as of yet. This yielded a sample of 49 players. 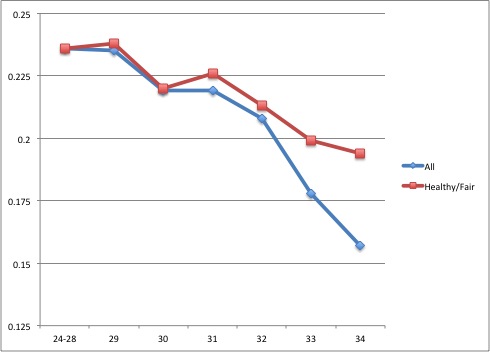 Neat, huh? Now let me talk about it.

There are two lines here. The blue line is all players from my sample. You will notice that it tracks closely with the red line until the players hit age-33, when it drops off sharply. This is because an alarming number of players in our sample are completely or nearly done by age-33.

We may want to assume that Votto will stay healthy enough to play. We can also assume that he has enough non-power skills to continue being playable (this was not true for everyone in our sample) at an advanced age. We may also want to assume that Votto isn’t going to take steroids like crazy. This is what the red line is for. I have labeled it healthy/fair. Mostly, it removes players who missed all of at least one season during the sampled age-range. It also removes Mark McGwire and Sammy Sosa because their ISOs are serious outliers and unlikely to be duplicated by any players going forward.

The red line shows a much gentler decline. Here are the numbers in chart form, for your enjoyment.

You’ll notice first, that there is basically no drop during the age-29 season. For this group of players, at least, the power decline didn’t start until age-30, where both groups had a plateau that lasted through the age-31 season whenÃ‚Â a steadier decline began.

All the players together, saw a total decline of 0.079 from their peak to age-34. The healthy/fair group saw a decline of 0.042 over the same span.

A sample of all major league players would expect a decline of around 0.030 by age-30 and 0.060 by age-34. Both of our groups see a milder decline at age-30, but whether the mild decline continues is heavily dependent on the continued health of the player.

So what can we conclude? While acknowledging that this is a small sample, it does seem to indicate that Votto’s power may stick a bit longer than he expects it to. Further, if he stays generally healthy, we can expect his power to age at a gentler rate than the general population.

I do want to note, that when looking at WAR, Votto does quite well in this group. It is also true that those who were out of baseball by age-34 tended to produce WAR at a much lower level than Votto has to this point in his career. Still, there is need for caution. Injuries often happen to ballplayer in hisÃ‚Â 30s, and a player can go from great to done in a blink (see Bagwell, Jeff).

Stat of the Week:

Isolated Power (ISO) is derived by subtracting batting average from slugging percentage. This “isolates” the power aspect of slugging and prevents it from being buoyed or depressed by unusually high or low batting averages. Effectively, it tell you how many extra bases (bases beyond first) a hitter gets per at bat. It is an excellent measure of a player’s true power.