Hall of Fame managing 39 years ago today, Pete Rose placed a winning bet on Foolish Pleasure to come in first in the Kentucky Derby. Pete’sÃ‚Â success at the track that afternoon threw open the gates to arguablyÃ‚Â theÃ‚Â most pivotal day in the history of the Big Red Machine. Saturday, May 3, 1975 was when Rose, who hadn’t played the infield in eight years, switched to third base at manager Sparky Anderson’s request. The move allowed Anderson to get George Foster’s bat in the Reds line-up on a regular basis. (Read Chris Garber’s excellent account and photo journal.) The Reds were 12-12 at the time. Sparky’s boys finished the regular season 108-54 and, of course, won the first of their back-to-back World Series championships.

Today’s line-upÃ‚Â In light of that history, May 3 is the perfect day for this year’s Reds’ manager to make an important line-up change for the 2014 Reds (13-16). Or the perfect day to do the same stubborn thing, hoping for a different result. One of those two things.

Braun to DL Reports earlier this week had indicated the possibility that Ryan Braun might play in this series. But the Brewers have decided to put their slugger on the DL while he recovers from a strained oblique muscle. Reds’ fans will have to wait until the Fourth of July to boo Braun in person, if they so desire.

UPDATE: Reds roster news The Reds activated Skip Schumaker (34) from the DL and designated Roger Bernadina for assignment (John Fay). John Fay is also reporting that the Cuban Missile is one step closer to re-entry, having thrown 16 pitches in an inning of work today.

Amateur draft The Reds have the 19th pick in this year’s amateur baseball draft, which takes place next month. Doug Gray offers his first look at the draft at his excellent site, RedsMinorLeagues.com – and reports these past hits at the #19 spot: 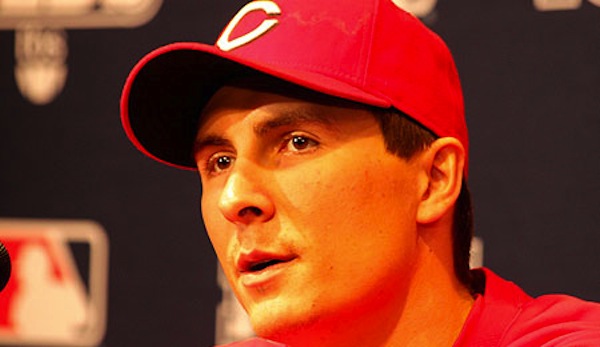 I’ll be there tonight, bells on. Go Reds!