A few days ago I read an article by Dave Cameron at FanGraphsÃ‚Â about fastball velocity across MLB. The article makes a few interesting arguments about how average velocity changes over the course of a season. According to the Cameron, April is the lowest velocityÃ‚Â month and fastball speed gradually risesÃ‚Â throughout the summer and peaksÃ‚Â in September. He also points out that pitching velocity stabilizes early on in the season and is a good predictor of pitcher performance.

At the time, I speculated that Mike Leake was throwing a little slower than previous years (the gun showed him at 89 most of the night). It made me curious to do a deeper investigation into the subject, not only for Leake, but for the rest of the rotation. Here is what the underlying data shows so far for the Reds’Ã‚Â starting pitchers:

The first number that jumps out of this table is that Alfredo Simon, despite transitioning from a reliever to a starter, has not lost any speed on his fastball. He leads the rotation in fastball velocity.

Despite April being the slowest month, Mike Leake is the only one of the starting five that has lost speed on his fastball compared to the average for 2013. This is a strong positive sign for the Reds’ starting five. Johnny Cueto has added almost a full MPH to his fastball, and we can expect that to increase as the season progresses. I’m working on another post about the relationship between fastball velocity and FIP, but the early evidence indicates that small changes in fastball velocity can play a significant role in a pitcher’s performance.

CuetoÃ¢â‚¬â„¢s pitching line so far is ridiculous and almost certainly unsustainable. A .191 BABIP (especially compared to his career number) indicates that he will undergo a regression as the season continues. His K% will come back to earth eventually. Despite this, both his xFIP and SIERA project him to have a great season.

Homer BaileyÃ¢â‚¬â„¢s line is exhibit #1 for why we should not trust small sample sizes. His ERA is inflated by an unreal .429 BABIP and his FIP is suffering from his last start against the Pirates. Both of these are unsustainable, and his 2.80 xFIP demonstrates how unlucky Bailey has been with HR/FB ratio over his first few starts. I won’t write much more about this because Justin already has written convincingly about it.

Tony Cingrani, whileÃ‚Â possessing a weapons-grade fastball, is also working on his other pitches. As that article points out, Cingrani is excellent at hiding the ball on his delivery and has made a huge improvement on his secondary pitches. Combine all that and you can see why he has struckÃ‚Â out 29% of the batters he’s faced this season.

Here’s a chart that shows various bottom-line measurements of pitcher performance, in this case for the Reds’ rotation based on their current numbers from 2014: 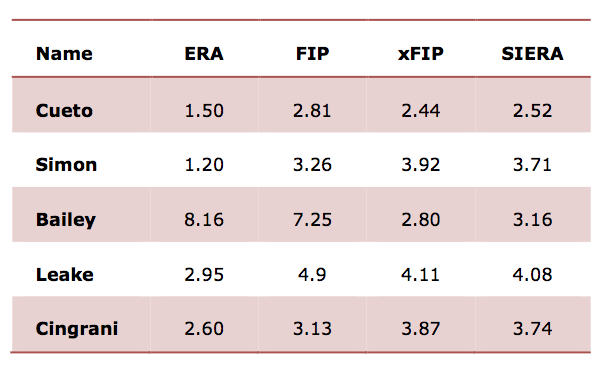 Looking at the ERA column in the above chart, you can see why evaluating a pitcher on the number of runs he has given up, not on strikeouts, walks and home runs can be extremely misleading. Analyzing their currentÃ‚Â BABIP (and the fact that a pitcher has little control over his BABIP is backed up by how similar the career BABIP is for all five pitchers), you can see how “lucky” four of the five Reds’ pitchers have been through three games.

Each of them (save Homer Bailey) has a much, much lower BABIP than the league average (~.300) or their respective career averages. As their luck evens out and that number moves toward their usual number, we can expect their ERA to rise.

A few weeks ago we discussed how using walks, strikeouts, and home runs are a better way to predict future performance than ERA. The scatter plot I posted indicated that only 9% of the variation in year-to-year ERA could be explained by the previous year’s ERA.

I feel bad for our other authors who have to write about the Reds hitting, because so far we have an embarrassment of riches to report from sixty feet from homeÃ‚Â (knock on wood). With 4 of the 5 at or above their 2013 fastball velocities, we have early evidence that the wave of good pitching will continue into the future.