[Edit. Ben Rubin (pictured below), loyal member of Redleg Nation, is a Cincinnati native, currently living in Jersey City, New Jersey. Ã‚Â He is a graduate student and adjunct professor of writing and heÃ‚Â attended all three games of last weekend’s series between the Mets and Reds. Thanks for sharing your experience, Ben! – SPM]

This weekend I made my annual pilgrimage out to Queens to see the Reds play the New York Metropolitans. As a Cincinnati native who didnÃ¢â‚¬â„¢t get into baseball until I moved away from the Queen City, the Reds are my hometown team but Citi Field is my hometown park. Although IÃ¢â‚¬â„¢ve caught a few games at GABP on trips home to see my parents, IÃ¢â‚¬â„¢ve seen my Redlegs far more times in Queens.

This series comes but once a year, and I try to go to all three games if possible. This year, since it is a weekend series, IÃ¢â‚¬â„¢m able to see them all. The first game is Friday night, and IÃ¢â‚¬â„¢m going with a friend, Michael, who is an ex-pat like myself. He hails from western Massachusetts and is a die-hard Red Sox fan. Even though he has no stake in this game, he loves baseball and his mild disdain for the Cardinals and vitriolic hatred for the Yankees are a rough mirror image of my own. Plus heÃ¢â‚¬â„¢s really excited to see Billy Hamilton (who is unfortunately not in the lineup). Saturday, IÃ¢â‚¬â„¢m going with my long time girlfriend, Dana, who is also a Cincinnati native and a Reds fan. And on Sunday, IÃ¢â‚¬â„¢m going with the enemy, my friend Molly, who is an unflagging Mets fan.

Citi Field lies far out in the Flushing neighborhood of Queens, three trains and two rivers away from my home in Jersey City. It is, if not literally the longest possible single trip one can take on the NYC metro system, certainly in the conversation. The subway is jammed with Mets fans all three nights, and for those commuters who take the 7 back home from work in midtown to Astoria, Woodside, or Jackson Heights, IÃ¢â‚¬â„¢m sure Mets games are an almost unbearable hassle.

If youÃ¢â‚¬â„¢ve never been to Queens, you might be surprised. This is not the New York of network television. It feels more like CincinnatiÃ¢â‚¬â„¢s West Side than SeinfeldÃ¢â‚¬â„¢s. It is predominantly working-middle class, mostly residential, single family homes with small fenced in yards. Queens has historically been a haven for immigrants. There are more languages spoken here than anywhere else in the world. And this far out, there is none of the glitz and glamour of Manhattan, and even less of the hipster pretensions of Brooklyn.

Citi Field itself is situated on WilletÃ¢â‚¬â„¢s Point, a spit of land that juts out into long Island Sound. Just to the west is LaGuardia airport, and sometimes during games planes pass over the left field nosebleeds so low on takeoff and landing that they look as though theyÃ¢â‚¬â„¢ll clip the flagpoles. To the north, across the Sound and visible in the gap between the Jumbotron and the bleachers, are the dingy brown high rises of the Southeast BronxÃ¢â‚¬â„¢s ubiquitous housing projects.

And just across the 7 lineÃ¢â‚¬â„¢s tracks is Flushing Meadows, a massive park that has hosted two worldÃ¢â‚¬â„¢s fairs and boasts a massive metal globe, an equally giant, now roofless, concrete structure known as the Ã¢â‚¬Å“Tent of Tomorrow,Ã¢â‚¬Â and three no longer functional observation towers, the tallest of which rises more than 250 feet into the air. It has the same bitter-sweetly charming mix of mid-twentieth century idealism, late twentieth century decay and early twenty-first century nostalgia as its more famous Brooklyn twin, Coney Island. It feels stuck in time, like a place simultaneously looking wistfully back at a nostalgic past and hopefully forward to a future that never came. It might serve as a fitting metaphor for the post-Madoff Mets themselves, though making it seems unnecessarily cruel so IÃ¢â‚¬â„¢ll leave it to the readerÃ¢â‚¬â„¢s imagination.

Citi Field itself, however, could not be more different from its surroundings. It still has that new park smell and feel. It is only a couple hundred yards from the subway station (a bit of a misnomer since like most of MTA stations in Queens, it is above ground) to the stadiumÃ¢â‚¬â„¢s entrance, which opens into the really quite impressive Jackie Robinson Rotunda, a three story permanent shrine to Number 42, complete with larger than life sepia photographs and a video loop of highlights from his career. At the top of the central escalator, flanked by the team shops, are a series of nine life size TOPPS baseball cards depicting that dayÃ¢â‚¬â„¢s Mets lineup. 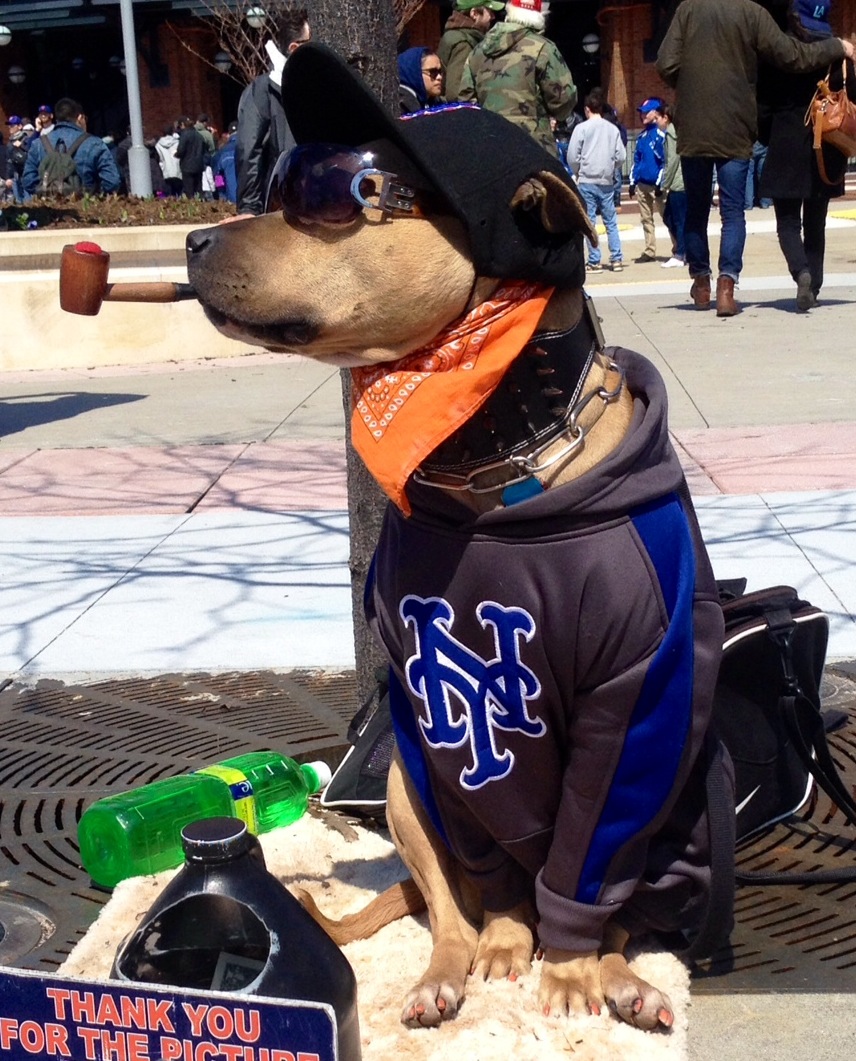 There is a stadium giveaway each night. The first night it is a David Wright T-shirt, depicting the Mets third-baseman in mid-swing in front of a massive, fluttering American flag, with a caption that reads: Ã¢â‚¬Å“Captain Wright.Ã¢â‚¬Â It is exactly the kind of t-shirt that if it were a wolf or an eagle instead of a baseball player, you might find at an airbrush shop in Gatlinburg, or two years later, at a thrift shop in Cincinnati. I have several of these Mets giveaway shirts at home. They always come in one size: Prince Fielder (IÃ¢â‚¬â„¢m 5Ã¢â‚¬â„¢6Ã¢â‚¬Â and 135 lbs. soaking wet), but theyÃ¢â‚¬â„¢re great to sleep in. Saturday I get a Mets calendar, which I give to a woman from a local brain injury hospital who is going around asking everyone in Reds gear for their calendars, which she gives to patients. It seems like a worthy cause. Sunday is a David Wright poster (are you noticing a trend? See below), which I give to Molly. SheÃ¢â‚¬â„¢s more likely to find it a good home in her pro-Mets family. I would have given her my t-shirt from Friday, but MollyÃ¢â‚¬â„¢s even smaller than I am and she might trip over it.

The stadium is surprisingly empty for a first weekend. While IÃ¢â‚¬â„¢ve never been to a sold out game at Citi Field, there are generally far more people here, especially considering the extraordinary baseball weather on Saturday and Sunday. FridayÃ¢â‚¬â„¢s weather may have kept some fans at home (New York pretty consistently gets the same weather as Cincinnati, only 24 hours later, which is great when I can call my parents to find out what to wear to work the next day, but makes me a little anxious when the last two games in Cincy have been on rain delay), but I have no idea what to ascribe their absence on Saturday and Sunday to.

If the jerseys I see fans wearing are any indication, the team shops sell Mets gear in a wide variety of colors and styles, but with only three names on the back: Wright, Hernandez, Piazza. These are the only three jerseys I see anyone wearing at any of the three games. The sole exception is a local celebrity named Ã¢â‚¬Å“CowbellmanÃ¢â‚¬Â (one word), which he has stitched onto a very official looking Mets jersey. At various particularly tense moments in the game, e.g. right before the walk-off Ike Davis grand slam on Saturday, Cowbellman starts banging on his eponymous instrument to a beat, to which fans in the stands add their voices in a steadily rising Ã¢â‚¬Å“LetÃ¢â‚¬â„¢s Go Mets!Ã¢â‚¬Â One particularly drunk fan in my section changes this to Ã¢â‚¬Å“Go Home Reds!Ã¢â‚¬Â Then sees me, shouts Ã¢â‚¬Å“Oh, sorry buddyÃ¢â‚¬Â and then continues chanting just the same. On Saturday, I get a good look at Cowbellman, because he is in my section, but I know he is there for all three games by the reverberations of his cowbell throughout the entire stadium.

Cowbellman appears to be the second most popular Mets fan, after this extraordinarily well trained/behaved pit bull, that seems to be both well known by fans, and a significant moneymaker for his owner, who asks for donations in exchange for pictures.

Friday night I actually have decent seats, which is a rarity for me. As a graduate student, IÃ¢â‚¬â„¢ve become a connoisseur of the cheap seats, which are both cheaper and better than at GABP. But on Friday night IÃ¢â‚¬â„¢m able to get $5 tickets in the second deck because of some kind of David Wright (See!) promotion I donÃ¢â‚¬â„¢t fully understand. Evidently, the team scattered $5 tickets throughout every section in the park on a first-come-first-served basis, but only as singles. MichaelÃ¢â‚¬â„¢s ticket is in an adjacent section. WeÃ¢â‚¬â„¢re hoping one of us can grab an open seat by the other once the game starts. It turns out not to be a problem, given the fact that we are almost the only fans in our respective rows.

The Mets evidently have a policy regarding walk up music that every selection that can be punny must be punny. Eric YoungÃ¢â‚¬â„¢s is Ã¢â‚¬Å“Forever Young.Ã¢â‚¬Â David WrightÃ¢â‚¬â„¢s is Ã¢â‚¬Å“The Right Stuff.Ã¢â‚¬Â Daniel Murphy uses the Dropkick Murphys, much to the chagrin of my Friday companion, and I would suspect, the vocally pro-Sox Murphys themselves. Anthony Recker strolls to the plate to the sounds of Miley CyrusÃ¢â‚¬â„¢ Ã¢â‚¬Å“Wrecking Ball.Ã¢â‚¬Â Even the Met fan to my left feels like that is gratuitous and suggests that it is probably some form of rookie hazing.

All in all itÃ¢â‚¬â„¢s a good weekend. It would have been nice to see the Redlegs pick up a series win (last year they swept the Mets and I had snuck a broom head into the park that I waved all the way back to Manhattan), but it was good to at least send Molly home in defeat on Sunday. And other than the misting rain Friday, the weather was great. If youÃ¢â‚¬â„¢re ever in New York and want to catch a ball game, you will not be disappointed in Citi Field.

On the way home on Friday night we stop in an Irish pub, more because of its proximity to the 7 train and our need for a bathroom than because of any deliberate aesthetic choice. In the space of one drink, we hear three, yes three, iterations of a terrible pop-country cover of Old Crow Medicine ShowÃ¢â‚¬â„¢s Ã¢â‚¬Å“Wagon Wheel,Ã¢â‚¬Â a song which I have alternately liked and loathed at different points in my life in inverse proportion to how often I heard it. This definitely qualifies as the latter, but evidently someone keeps requesting it. I have to lean back out of the crossfire, as Michael tries to engage rationally with, and then disengage entirely from, a particularly belligerent young woman who has just spied his Sox cap. He is failing miserably in both attempts. Ã¢â‚¬Å“Yes, but where do you live NOW?Ã¢â‚¬Â she asks rhetorically, and then answers her own question Ã¢â‚¬Å“New Yaaaaaaaaaawwwwk!Ã¢â‚¬Â MichaelÃ¢â‚¬â„¢s eyes say it all. Yankee fans really are the worst.