Johnny CuetoÃ‚Â threw another great game, giving up five hits and three walks over seven innings. He also struck out nine Mets. It’s only two starts, but Cueto has struck out 17 batters in 14 innings. He was victimized by a Curtis Granderson home run on a cutter that didn’t cut. Jeff Brantley said it was a similar pitch to the one Yadier Molina hit out against Cueto on Opening Day. Another hard-luck no-win for Cueto. Games like this reinforce why Wins are a terrible statistic to judge starting pitchers.

Brandon PhillipsÃ‚Â hit a two-run homer in the top of the eighth inning, putting a broad smile on Johnny Cueto’s face, at least for a while. BP turned on Dillon Gee’s final pitch and smashed it over the left field fence. Eric Young would have needed to be twenty feet tall to rob Phillips today.

Ryan Ludwick hit a screaming, line-drive homer down the left-field line to lead off the fifth inning.

J.J. Hoover began the ninth inning by walking the first batter he faced. Bad start. Then Joey Votto fielded a bunt and instead of making a safe play at first base, threw to second and failed to get the runner. It was a risky play for Votto, who was moving away from second base to field the ball and couldn’t get his feet set. Then Hoover walked the bases loaded as another batter tried to give up an out. Pinch hitter Ike Davis hit Hoover’s second pitch into deep, deep right field.

The Reds lead-off spot remains hitless five games into the season. Roger Bernadina went 0-for-3 today, after Billy Hamilton was scratched due to a jammed middle finger from his head-first slide into second base. Hamilton did enter the game for defensive purposes in the ninth inning. His finger looked pretty bad, so it wouldn’t be surprising to see him sit out again. Here’s a vote for letting Chris Heisey play CF tomorrow. 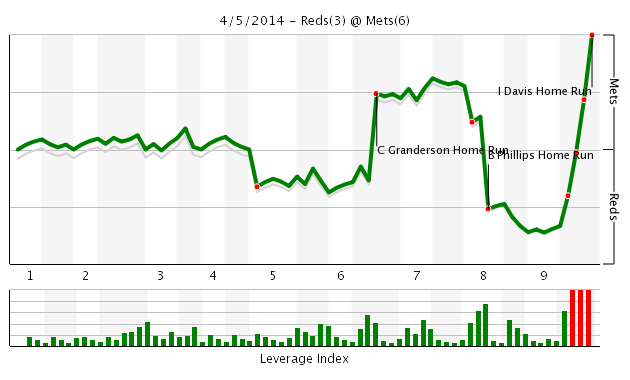 Manager Bryan Price had the option of leaving Sam LeCure in to pitch the ninth inning. LeCure, in his first appearance of the season, had thrown only eleven pitches in the eighth. Price chose to go with Hoover, who had successfully closed a few games in 2013. What the grand slam loss tells us about Price’s ability to manage? Absolutely nothing. Zero. Nil. Nada.

And please, let’s not judge J.J. Hoover’s ability to be a closer based on this one game. Aroldis Chapman blows saves every year. Hoover has been an excellent pitcher for the Reds and isn’t new to the ninth inning. It looked like he was overthrowing today. Chapman is a better pitcher than Hoover, no doubt. He’s a better pitcher than everyone. Sure, the Reds will be better when Chapman is there to take the ball in the ninth, seventh or first. But Hoover is more than capable of closing. Today just wasn’t his day. One inning, folks.

Jonathan Broxton will join the team in St. Louis sometime during the next series and may be activated as early as Tuesday.

Kyle Farmer:Ã‚Â Cannot walk the leadoff guy in the ninth in a one run game.

CharlotteNCRedsFan:Ã‚Â This bullpen scares me more than anything else. CanÃ¢â‚¬â„¢t believe I just said that.

Sergeant2:Ã‚Â Nothing to do now but regroup and come out battling tomorrow. Go Reds!