No sooner had the 2014 season had begun, and Johnny Cueto takes a ball off the left arm because, well, of course he would, sending the trainer to the mound and half of the patrons at Great American Ballpark to the new Brewery District to begin drinking heavily. Thankfully, it was nothing serious and Cueto hung around to pitch a beautiful game, giving up three hits, striking out eight, walking one and stifling the Cardinals. Only a backup breaking ball that found Yadier Molina’s bat marred Johnny’s day. Todd Frazier brought his bat to the ballpark today. Two singles, a walk and a stolen base. Somebody is going to have to hit from the right side this year. Maybe the Toms River, N.J. kid is going to be that guy. Zack Cozart made a beautiful play in the 8th inning. Remember: the RBIs are in Zack Cozart’s glove. Logan Ondrusek came in and promptly dispatched Matt Holliday. You weren’t worried, were you??Ã‚Â  True to his word, Price eschewed the matchup game with his relievers and left Logan in to pitch the 9th and was rewarded. Brandon Phillips got on base three times.

The Billy Hamilton Show has gotten off to a slow start to say the least. Four at bats, four strikeouts–which is not the Billy Hamilton we were looking for. Of course, it WAS Adam Wainwright and those breaking balls can make anyone look silly, especially when it’s your first Opening Day and you’re trying to make something happen in front of 43,000 amped up fans waiting for any excuse to go nuts. No reason to overreact, just a reminder that if Billy is going to matter this year, he’s going to have to get on base. Nothing new there. Joey Votto went 0’fer. I don’t worry about Votto in the least, but on a day when the Reds couldn’tÃ‚Â  scratch out even one run, it would have been nice if ….

The Cardinals made 3 errors and the good guys played error free ball. You’re supposed to win games when that happens.

Pitchers are always ahead of hitters this time of year and these two pitchers have established themselves as two of the best in the business. Still, the Reds are going to have to find a way to beat the St. Louis Cardinals–and the sooner they start sending the message to the other dugout that they won’t back down from the adversity the Cardinals always seem to bring–the better. We can’t still be talking about this in August.

This last time the Reds were shut out on Opening Day, the year was 1953. And the fact that I have to report that today truly sucks, sports fans. 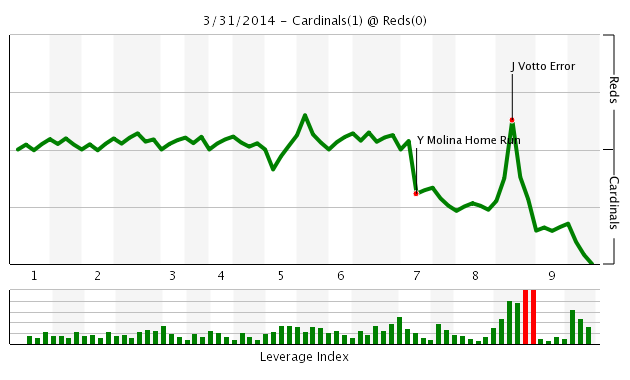