When Steve asked me to write this column about pitching, he thought my Ã¢â‚¬Å“love of all things statisticsÃ¢â‚¬Â [his words, not mine … although too funny] would help me distract you from work every Friday morning. In retrospect, perhaps he should have sought out someone from Cornell’s medical school to write it.

Looking back on spring training, it’s not hard to see how hope can turn to panicÃ‚Â in a matter of hours. It looked like Mat Latos might miss a few starts, but thankfully he (knock on wood) will only miss one. Homer Bailey felt a strain, but is now doing better. Johnny Cueto felt soreness in right shoulder, but hit his pitch count in his next outing.Ã‚Â And we managed to avoid anyÃ‚Â cough syrup-related injuries. A few days ago, we were stapling together a roster, today it looks like the Reds will return to Great American BallparkÃ‚Â in OKÃ‚Â shape.

Yet, when I read SteveÃ¢â‚¬â„¢s recent columnÃ‚Â on injuries, it reminded me of a conversation I had over a game of ping-pong (as you can tell, graduate students live rough lives). A few years ago, my friend and I were discussing the upcoming RedsÃ¢â‚¬â„¢ season. He pointed out that, on average, Major League Baseball teams use seven starting pitchers during a season. Real team depth, it turns out, is being able to pitch your seventh best player every five days.

One, although it is unfortunate, losing multiple starting pitchers to extensive injury is not unexpected. It is the norm.

Two, the Reds are not the only team that will have to deal with injuries.

Perhaps the larger lesson is that most of us have been operating on the assumption that the Reds will have their fab five throughout the season. The improbable emergence of Tony Cingrani in 2013 and a historic run of 161/162 starts in 2012 Ã‚Â may have lulled us into a sense of complacency about what we should realistically expect out of a pithing staff. Regression can be mean.

And that is what this Friday morning column will be about — about looking at the data and trying to help make sense of a complicated game. If we use a small sample size (or outliers), then it’s possible to make unrealistic expectations about 2014. As we start looking beyond our own perceptions and recollections, bigger trends about pitching become (slightly) clearer.

This column will push beyond recollections and simple perceptions about pitchers and will get deep into what the data tell us about pitching. Stats like FIP, xFIP, ERA- and SIERA may not have the most intuitive formulas (or names, really) but they provide a betterÃ‚Â picture about how pitchers preform over time.Ã‚Â Steve wrote an article that explained the differences between ERA, SIERA, xFIP and FIP. Here is an excerpt:

FIP stands for Fielding Independent Pitching. FIP is calculated by counting the number of home runs, strikeouts, walks and hit batters the pitcher actually allows and plugs those numbers into a formula. A constant term (3.2) is added so the resulting number is scaled to ERA for the sake of familiarity and comparability.

The argument for FIP over ERA is that it better isolates what the pitcher controls Ã¢â‚¬â€ not his shortstopÃ¢â‚¬â„¢s range, not the official scorerÃ¢â‚¬â„¢s ruling, not the relief pitcherÃ¢â‚¬â„¢s ability to throw strikes, not whether bloops fall in for hits etc.

xFIP (Expected FIP) uses the concept of FIP as a starting point, but normalizes home runs across luck and stadiums. FIP uses a hard count of how many home runs a pitcher actually gives up. xFIP estimates how many a pitcher should give up assuming normal luck. ItÃ¢â‚¬â„¢s based on the notion that a pitcher only controls how many fly balls he surrenders, and that home runs are a fairly constant percentage of all fly balls (HR/FB) over time. [On the other hand, some pitchers, like Mike Leake, have seemed to be more prone to home runs, even when taking into account how many fly balls they give up.] xFIP has been proven to be a better ERA predictor than FIP.

SIERA (skill-interactive ERA) adds more nuance yet to FIP. It accounts for the fact that all balls in play are not the same. For example, ground balls are turned into outs at a higher rate than line drives but at a lower rate than fly balls. It also turns out that pitchers with more strikeouts generally have lower HR/FB, so itÃ¢â‚¬â„¢s a refinement on xFIP. Pitchers with more strikeouts also tend to have lower BABIP and more double plays per ground ball. SIERA has been proven to be a better predictor of ERA than either FIP or xFIP.

Although ERA gives us a good idea of whatÃ‚Â occurred in the past (i.e., how many runs the other team scored), it’s not a particularly accurate predictor of what will happen in the future. For example, take a look at this is the scatterplot of ERA from 2007 on the x axis and ERA in 2008 on the y axisÃ‚Â (from Mathematics and Sports, ed. Joseph A Gallian, chapter by Jim Albert, professor of mathematics and statistics, p. 8): 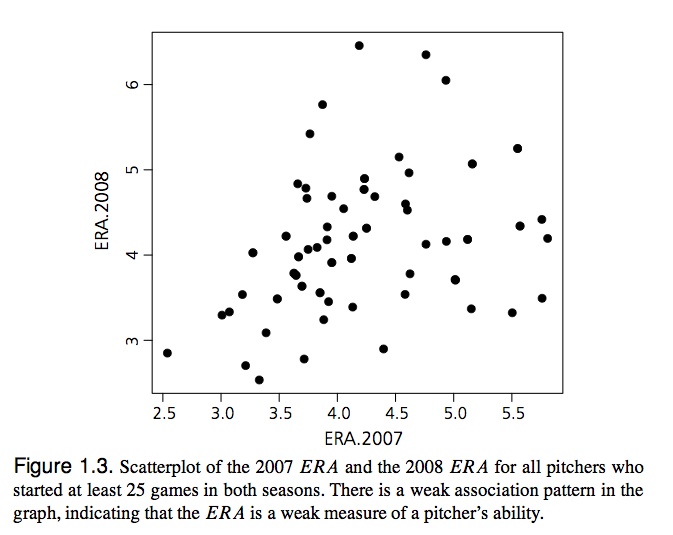 A scatterplot that maps close to a straight line would indicate that past ERA can reasonably predict a pitcher’s ERA in the following year. That’s not what this data shows, however. If you stare at it long enough you might be able to find a unicorn.Ã‚Â Albert explains that “Although there is a positive trend in the scatterplot, only 9 percent of the variability in the 2008 ERA values can be explained by the 2007 ERA values” (p. 8). That is a stunning result; looking at just past ERA misses 91% of the factorsÃ‚Â that change a pitcher’s ERA from year to year.

Now, instead of declaring a clear victory for defensive independent pitching statistics, Albert reminds us that defensive independent pitching statistics (DIPS, which is close to FIP) explains about 15% of future ERA. So, it is better, but neither tell us even close toÃ‚Â the whole story. In a case where no single predictor helps explain future performance, it is important to look at multiple performance models to get a better picture.

What I plan to do with this column is to start your Friday mornings with a deep dive into the Reds pitching staff. It might be a biography or focus on one pitcher, or an explanation of how well the fab five (or seven, or eightÃ¢â‚¬Â¦) have performed over a certain period time, or the science of a particular pitch, or a discussion of Bryan Price’s use of the bullpen.

Feel free to post suggestions in the comments section, too.Ã‚Â IÃ¢â‚¬â„¢m looking forward to our discussion about how the Reds pitching staff is performing, sixty feet from home.